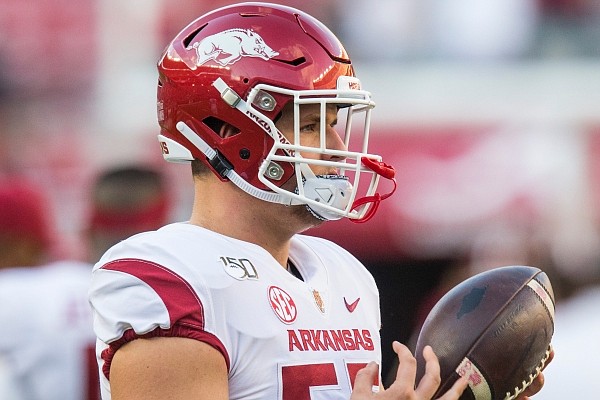 Arkansas offensive lineman Beaux Limmer is shown during the Razorbacks' game against Alabama on Saturday, Oct. 26, 2019, at Bryant-Denny Stadium in Tuscaloosa, Ala.

The redshirt freshman from Tyler, Texas, might play twice that many snaps in the season opener against No. 4 Georgia on Sept. 26.

Limmer has been getting a lot of work at first-team right guard in preseason practice and likely has won a starting job, though the Razorbacks' depth chart hasn't been released yet.

"He's just been consistent," Arkansas offensive coordinator Kendal Briles said. "You know what you're getting out of Beaux every day. Beaux's really a twitchy kid. He's got good weight. He's around 305.

"But when you see him move, he really plays fast. And then Beaux will strike you, and he'll finish you. He's a really tough kid. I'm glad he's on our team. He's done a really nice job."

Limmer played in four games last season as a true freshman, which allowed him to preserve his redshirt year.

"The experience is something that's invaluable," Limmer said. "You never really know what it's going to be like until you're actually in there playing against the best D-linemen in the nation.

"That experience was really great to have."

Limmer said all the offensive lineman are working hard to earn starting jobs.

"That's me included," he said. "It's anybody really. You just put your head down, you've got to work hard and you'll end up where you want to be."

Junior Dalton Wager is a returning starter at right tackle, so he's been working alongside Limmer much of practice.

"Beaux is the ultimate teammate," Wagner said. "He's a guy that goes out there and works his tail off for you and the guy across from him. He's just trying to make everybody better. He's going to be a tremendous addition to our O-line this fall.

"He's strong, he's fast, he's twitchy, and he knows this playbook inside and out like the back of his hand. He does a tremendous job in there. I'm very comfortable being next to him."

Limmer has taken some snaps at center as the coaches continue to work linemen at multiple positions to try to build as much depth as possible going into the season.

"I'm just going to play anywhere they want me to," Limmer said. "I'm not sure where I'll end up, but wherever I play I'm going to do that to the best of my ability."

Limmer said he played center in two games at Tyler Lee High School when the team's starter was out.

"I did really well snapping there," he said. "Also, last year in fall camp, I played center. So going to center this year really wasn't a very big deal."

"Me and him are standing toe to toe in the weight room right now," Marshall said. "Beaux Limmer, he's good. He's very good.

"We've gone against each other. He's gotten me a few plays, I've gotten him a few plays. It goes back and forth."

Limmer said his best marks in the weight room are 430 pounds on the bench press, 565 on the squat and 325 on the clean.

"Yeah, me and Jon Marshall, we're pretty neck and neck," Limmer said. "I think he's probably got me on squats, but everything else we're really close.

"Back in the summer, we were always having a little friendly competition in the weight room. We stay together pretty well."

Limmer is one of three offensive line signees from the 2019 class competing to start this season along with sophomore Ricky Stromberg at center and redshirt freshman Brady Latham at left guard.

"All three of us are all real good friends," Limmer said. "We all came in together, so we kind of bonded, especially the first summer we were here.

"So it's been real fun alongside them. Real good bond between all three of us when we're out there. Communication is always really good. We're just in sync with each other."