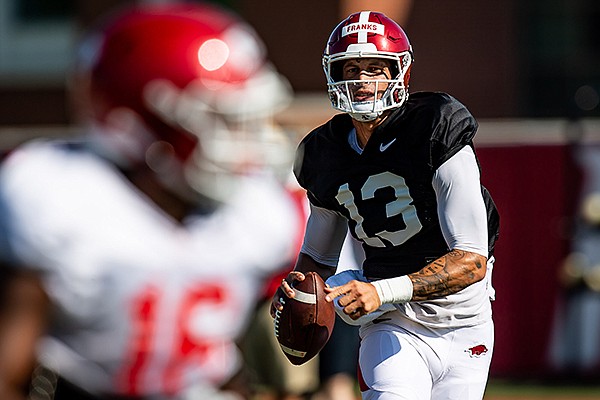 FAYETTEVILLE — The University of Arkansas revealed its permanent team captains for 2020 in a thoroughly modern way Wednesday — by dropping a hype video.

The captains, all seniors, were shown in this order on the video: quarterback Feleipe Franks, defensive tackle Jonathan Marshall, linebacker Grant Morgan and tailback Rakeem Boyd.

The selections, voted on by the team, are two standouts from both sides of the ball representing key recruiting areas for the Razorbacks. Morgan is an in-state product from Greenwood; Boyd and Marshall come from the fertile recruiting grounds of Texas; and Franks is a native Floridian and graduate transfer from Florida.

Franks, who has been running with the first team throughout preseason practices, is the first transfer named as a team captain in his first season of eligibility with the Razorbacks since Ryan Mallett earned the distinction in 2009. Mallett, also a team captain in 2010, is frequently cited as a comparison for Franks, a 6-6, 228-pounder, due to his powerful right arm.

Franks, however, is well regarded for his running ability, which should open up extra dimensions for an Arkansas offense that has been sluggish the past two seasons.

On his radio show last week, first-year Coach Sam Pittman said Franks was “coming into his own” as a leader on the team.

“He’s done a really nice job,” Pittman said. “He has experience. He’s won a New Year’s Day bowl there at Florida, and they won 10 games that year [2018]. So especially in this situation, you need some experience at that position to kind of help you kick-start the season.”

Morgan spoke to reporters on a Zoom call Tuesday night in which leadership was brought up.

“I come every single day and just get ready to work, get a positive attitude and just be the guy I am. Have fun and enjoy it because you know the days are numbered.”

Marshall, not known as one of the most outspoken Razorbacks, did talk about his rising role on Aug. 31.

“I feel like a leader now,” he said. “It’s coming in there. I’ve gotta work on my leadership skills a little bit more. Everything else is good.”

He also talked about being a stronger voice at his position with the departure of seniors McTelvin “Sosa” Agim and T.J. Smith from the front four.

“Me and Sosa came in together, but with them older than I am, it really plays a big factor with me trying to fill their shoes basically,” Marshall said.

Boyd, from Houston, is back for his senior season after rushing for 1,133 yards and eight touchdowns last season. He was an offensive game captain twice last season when he averaged 6.2 yards per carry.

The naming of team captains 10 days prior to the season opener against Georgia stands in contrast to how former Arkansas Coach Chad Morris handled the captains last year.

The 2019 team named Agim, De’Jon Harris and Smith as permanent defensive captains, but used a rotating system for naming a fourth captain on a game-by-game basis.