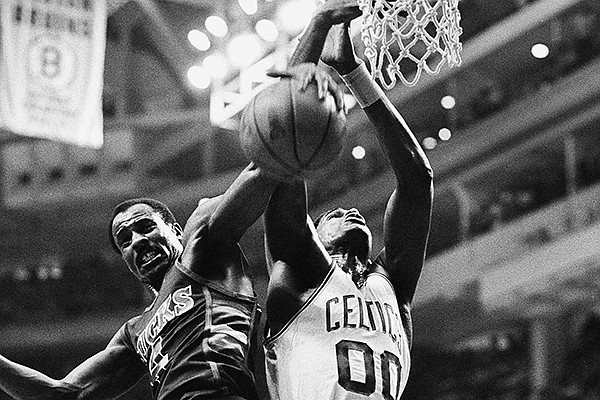 FAYETTEVILLE — There’s no record of the NBA office deciding to create the league’s Defensive Player of the Year Award in honor of Sidney Moncrief.

It just seemed that way.

Before Moncrief – the Little Rock Hall and University of Arkansas star – began locking down opponents as a 6-4 guard for the Milwaukee Bucks throughout the 1980s, big men known for blocking shots like Bill Russell, Wilt Chamberlain, Nate Thurmond and Kareem Abdul-Jabbar were considered the NBA’s elite defenders.

Then Moncrief made it cool for the way a guard shut down his man to be recognized as the best defensive player in the league.

Moncrief won the NBA’s first Defensive Player of the Year Award for the 1982-83 season. Then he won it again the next season.

“The NBA did not invent the award for me,” Moncrief said with a laugh this week. “But I certainly benefited from it.”

Moncrief’s defense – along with his all-around game — led to him being elected to the Naismith Memorial Basketball Hall of Fame in 2019.

The only Arkansas player to earn that distinction, Moncrief is the Arkansas Democrat-Gazette’s choice as the No. 1 NBA Razorback.

Today marks the last installment in our series chronicling the 10 best Razorbacks to play in the professional ranks. This list was compiled after consultation with media members, coaches and assistant coaches who are familiar with Arkansas’ all-time roster.

“At Sidney’s peak, he was one of the very best players in the NBA,” said Darrell Walker, who followed Moncrief as an All-American guard for the Razorbacks and played against him as a pro. “He should have gotten into the Hall of Fame a lot faster than he did.”

“When you play against Moncrief, you’re in for a night of all-around basketball,” Michael Jordan, a Hall of Famer who led the Chicago Bulls to six NBA championships, told the Los Angeles Times in 1986. “He’ll hound you everywhere you go, both ends of the court. You just expect it.”

Moncrief sometimes guarded forwards, including 6-9 Larry Bird, a Hall of Famer who won three NBA titles with the Boston Celtics.

“Moncrief does everything you’re supposed to do on defense and doesn’t take any shortcuts,” Bird told Sports Illustrated in 1985. “Plus he does it every night.”

Moncrief said he approached defending an average player the same as he did a star.

“I didn’t really care who I was playing against, I guarded everybody with the same effort,” he said. “I had the same concentration, the same attention to detail.”

Moncrief was an assistant coach with the Golden State Warriors, Dallas Mavericks and Bucks.

“I watched great defenders when I coached in the NBA, but some of them were only great when they guarded great players,” he said. “Then a lesser player could do whatever he wanted to do offensively, because they didn’t really care about guarding that player.

“I didn’t have that mindset. I was all in on the defensive side every night that I played.”

Moncrief said he learned to make defense a priority playing for Oliver Elders at Hall and Eddie Sutton at Arkansas.

“Coach Elders first taught me the importance of playing defense in high school,” Moncrief said. “Then the four years of Coach Sutton’s defensive philosophy, that took me to a different level in college. We spent most of practice working on defense.

“So the fact that Coach Elders and Coach Sutton gave me such a strong foundation defensively, I thought I should be a good defender.

“If I watch highlights of myself now playing defense, I think, ‘Yeah, I was pretty aggressive.’ But when you’re doing it all the time, it’s so natural that you don’t see it as anything exceptional. It’s just the way you are on defense.”

Walker, now coach of the University of Arkansas at Little Rock as Moncrief was previously, also learned how to play relentless defense under Sutton.

“I think defense is all about effort, and Sidney would really get into you,” Walker said. “He was a great athlete, and had a knack for knowing what his opponent was going to do.

“Sidney was very physical, too. He was wiry, but he was strong.”

“I always thought the way we played as a team and understood our assignments was really important for me as a defensive player,” Moncrief said. “We were always one of the league’s top defensive teams.”

Moncrief became an elite player on offense as well. He averaged 21.0 points over a five-year span in which he made five All-Star Game appearances. He also was a first-team All-Defensive Team selection in four of those seasons and a second-team pick once.

In Moncrief’s two seasons as Defensive Player of the Year, he averaged 19.8 points and a career-high 22.5.

“I always say Michael Jordan is the greatest two-way player I’ve ever seen,” Marques Johnson, a five-time All-Star forward who was Moncrief’s teammate in Milwaukee, told NBA.com in 2019. “Sidney Moncrief is second.”

“If Sidney had played in New York, Boston, Chicago, Los Angeles, he would be an NBA god for what he did as a player his size,” Walker said. “He’d have been a super, super, superstar.

“As much as people know about Sidney and talk about him now, he’d be even better known if he had played in a bigger media market.”

Moncrief said he didn’t give Milwaukee’s market size much thought.

“I never felt it mattered or did a ‘what-if’ scenario in my brain,” Moncrief said. “I played the game because I loved to compete, not because of how famous I could be.”

Moncrief, who will turn 63 on Monday, is a motivational speaker and lives in the Dallas area. He and his wife, Takisha, run “Moncrief One Team,” which is described as a “A High Performance People Development Company” on its website.

Recently, Moncrief released a book titled, “The G.R.I.T. Factor,” which according to a news release is focused on diversity, equity and inclusion.

Moncrief still attends games at Arkansas, where as a junior he averaged 17.3 points and 7.7 rebounds and became known as one of “The Triplets” along with Ron Brewer and Marvin Delph. The trio led the Razorbacks to the 1978 Final Four and a 32-4 record.

The next season as a senior, with Brewer and Delph gone, Moncrief averaged 22.0 points and 9.6 rebounds and Arkansas finished 25-5 and advanced to the Elite Eight. Arkansas went 26-2 during Moncrief’s sophomore season of 1976-77 and made its first NCAA Tournament appearance since 1958.

“Maybe one of the greatest basketball photos ever is Sidney cocking the ball back [to dunk against Texas] on the cover of Sports Illustrated the year Arkansas went to the Final Four with ‘The Triplets,’ ” said Mississippi State Coach Ben Howland, who as a Weber State player faced Moncrief in the NCAA Tournament in 1978 and 1979. “Sidney is one of the all-time greats in the history of the NBA in my opinion, and would be a phenomenal player right now.”

Moncrief ranks second on the Razorbacks’ all-time scoring list with 2,066 points and is their career leader with 1,015 rebounds.

“When I came to Arkansas, Sidney Moncrief was the gold standard,” said Joe Kleine, an All-Southwest Conference center in 1984 and 1985 who played 15 seasons in the NBA. “All these years later, he’s still the gold standard.

“You wanted to be like him on and off the court, what was said about him, how he played. He was a complete player. He gave you what you needed game after game, season after season.”

The Bucks made Moncrief the No. 5 overall pick in the first round of the 1979 NBA Draft, the highest a Razorback has ever been selected.

“I loved playing in Milwaukee,” Moncrief said. “It’s a gritty city based on work ethic, and I was a gritty player.

“So I had a great relationship with the fans. I reflected their values and how they viewed going to work.”

Milwaukee made the playoffs all of Moncrief’s 10 seasons there, but the furthest the Bucks advanced was to the Eastern Conference final, where they lost to the Philadelphia 76ers in 1983 and Boston in 1984 and 1986.

“Every year there was an element of, ‘Would this be the year the Bucks get past the Celtics and the 76ers and make it to the NBA Finals?’ ” Moncrief said. “We couldn’t quite do it, but we had some great years.”

“You always want to be one of the best at what you do,” Moncrief said. “I’m glad I was able to accomplish that for multiple years.”

“You just didn’t want him off the floor, because he played both ends all the time,” Nelson told NBA.com in 2019. “He couldn’t do it physically, of course, but you wanted him out there 48 minutes every night.”

Moncrief retired when the 1989-90 season ended, then after sitting out a year returned to the NBA with the Hawks.

“I felt I retired too quickly,” Moncrief said. “I realized right away that I still wanted to play.

“One year off gave me time to recuperate emotionally and mentally. Then I was ready to play again.”

Moncrief played off the bench in Atlanta and helped the Hawks make the playoffs. Then he retired as a player for good.

“I wanted to play longer, but most teams wanted someone younger,” Moncrief said. “They didn’t want an older guy like me taking up a spot that could be occupied by a younger player.”

Moncrief was inducted into the Collegiate Basketball Hall of Fame in the fall of 2017, then in the spring of 2019 he was elected to the Naismith Hall of Fame.

“I look back on my career with a lot of gratitude,” Moncrief said. “I played in a great city for 10 years and throughout my career I had tremendous teammates and coaches.

“That’s what it’s all about at the end of day. So I have no regrets.”

Moncrief said that with the perspective of time, winning the first two NBA Defensive Player of the Year Awards means more to him now than when he was playing.

“I’ve always taken a lot of pride in my defense,” Moncrief said. “So I’m glad they came up with the award.

“For me, the timing couldn’t have been better.”