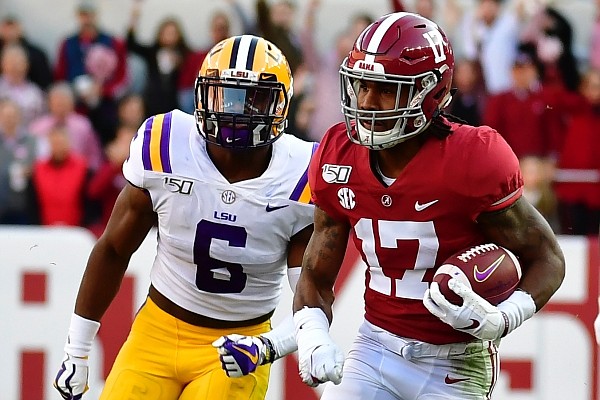 Alabama's Jaylen Waddle (17) returns a punt for a touchdown as LSU's Jacob Phillips (6) gives chase in the first half of an NCAA college football game, Saturday, Nov. 9, 2019, in Tuscaloosa, Ala. (AP Photo/Vasha Hunt)

Last year, we published our own version of a dream college football road trip — an itinerary that could allow a particularly obsessed fan to see each team in the preseason Top 25 at least once in person.

Needless to say, 2020 isn’t the year for something like that.

The coronavirus pandemic has shut down much of Division I football. Only three of the Power Five leagues are still playing, meaning several teams from the preseason Top 25 are out of action. Michigan-Ohio State? That game is on hold right now, along with the rest of Big Ten football. Ditto for the Pac-12.

But there are still plenty of big matchups to look forward to. There’s no guarantee these games will be played — a quick look at Major League Baseball tells you all you need to know about how quickly a schedule can be jolted by postponements. And because football teams don’t play doubleheaders, college football may face an even bigger challenge completing a credible season.

But here are a few games to look forward to, if the current schedule holds up. Each team’s preseason ranking is included.

Auburn-Kentucky on Sept. 26 could be interesting, but this stands out as the first really big game on the SEC schedule. After Jamie Newman’s decision to opt out, Georgia won’t have too much time to get its quarterback situation in order.

The State Fair of Texas has been canceled, but this rivalry game at the site of the Cotton Bowl is still on. Oklahoma has won the Big 12 in all three seasons under Lincoln Riley — with three different quarterbacks, each of which finished no worse than second in the Heisman Trophy race. Redshirt freshman Spencer Rattler takes over this year.

Jimbo Fisher is in Year 3 as coach and Kellen Mond is in Year 4 as the starting quarterback. Time for Texas A&M to take a big step forward, although the Aggies have to play Alabama the week before this showdown with the Gators.

For this year at least, the Fighting Irish are in the ACC, and they’re even showing off the logo on the field to prove it. Clemson — which was supposed to play Notre Dame this year anyway — now has to outlast the Irish to win a sixth straight conference title.

This game now takes place the same weekend as another major Southern sporting event — the Masters. LSU beat the Crimson Tide on the road en route to a national title last season, and Alabama will now try to return the favor. The Tigers were already facing major losses this year before coronavirus opt-outs left them with an even bigger challenge. It’s hard to say what kind of shape they’ll be in by the time this matchup rolls around.

Yes, the Iron Bowl will likely mean more in terms of the SEC title race, but the Egg Bowl is developing a well-deserved reputation for silliness — and is now must-see TV after the way last year’s game ended. Both teams have new big-name coaches: Lane Kiffin at Mississippi and Mike Leach at Mississippi State. (Alas, Kiffin isn’t scheduled to face his old friends at Tennessee this season.)