Can’t-miss games around the SEC this fall 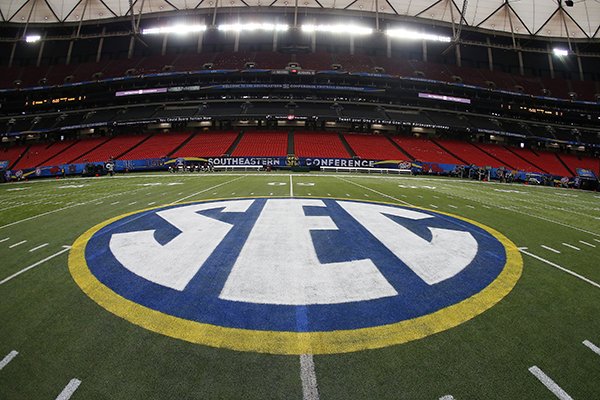 But those games were canceled because of the coronavirus pandemic.

That doesn’t mean there aren’t SEC football games to still be enjoyed.

In fact, because of the virus, SEC football will feature more conference games than ever.

There will be 11 weeks of SEC vs. SEC — good on good as coaches like to say in practice when the starters go at it — as all the teams play 10 conference games for the first time.

It’s great for the TV networks and fans. Maybe not so great for the players — given how an eight-game SEC schedule already was a pretty tough grind — and likely Alabama’s Nick Saban is the only coach who’s happy about it.

It’s a little easier to lobby for a 10-game SEC schedule when you’ve led Alabama to five national titles since 2009.

Oh, and Alabama got Kentucky and Missouri added to its schedule when nonconference games were canceled, while Arkansas got Florida and Georgia.

The Crimson Tide already were playing Georgia, but the SEC couldn’t have added Florida to Alabama’s schedule and let the Razorbacks play Kentucky?

Not that the Wildcats are an easy opponent. They’ve become pretty good under Coach Mark Stoops. But they’re also 1-32 vs. Florida in their last 33 matchups.

So it’s good to be Alabama in the SEC.

Having an All-SEC schedule makes it tough to select the best game each week, but here are our choices.

We actually cheated one week — Oct. 3 — and made two choices for an even dozen top games for the season.

Leach last was on the sideline for an SEC game in 1998 when he was Kentucky’s offensive coordinator.

After good runs at Texas Tech and Washington State, where Leach proved he could win at out-of-the-way places such as Lubbock, Texas, and Pullman, Wash., he’ll see if he can work his magic in Starkville, Miss.

LSU opens defense of its SEC and national championships having lost a slew of NFL players and some assistant coaches, but the Tigers still have a talented roster.

Aggies Coach Jimb0 Fisher will try — again — to be the first former Nick Saban assistant to beat him in a head coaching matchup.

Texas A&M lured Fisher from FSU with a 10-year, $75 million contract to beat Alabama and win SEC and national titles.

After Fisher’s first two Aggies’ teams were 9-4 and 8-5, Texas A&M is ready to start seeing a bigger return on its investment.

The Tigers and Bulldogs will meet for the 125th time in a game first played in 1892 – Auburn won 10-0 in Atlanta – and which is billed as “The South’s Oldest Rivalry.”

The teams’ previous 82 regular-season meetings were in November, but the coronavirus has changed a lot of things.

The Tigers’ lone victory in that span was 40-7 at Jordan-Hare Stadium in 2017, but Georgia came back to beat Auburn 28-7 in the SEC Championship Game that season.

It’s only the fifth time Florida has played Texas A&M and just the third SEC matchup.

Bulldogs Coach Kirby Smart, who was Nick Saban’s defensive coordinator with the Tide, has faced his mentor twice previously.

Alabama won narrowly both times. Those matchups were in the College Football Playoff title game in 2017 and SEC Championship Game in 2018.

This game could be the preview of another postseason matchup.

That lopsided loss was a blow Mark Richt couldn’t overcome. He resigned under pressure as Georgia’s coach after the season despite a 9-3 record and was replaced by Smart.

For the fourth consecutive game Tide Coach Nick Saban will face a head coach — Jeremy Pruitt in this case — who was an assistant for him. The previous three weeks he will have gone against Texas A&M’s Jimbo Fisher, Ole Miss’ Lane Kiffin and Georgia’s Kirby Smart.

Pruitt came to Tennessee for the 2018 season after being Alabama’s defensive coordinator.

The Vols have lost 13 in a row to the Tide, but there are signs Tennessee is closing the gap.

Pruitt has put together some impressive signing classes, and Tennessee rallied to finish 8-5 last season after starting 0-2 with losses at home to Georgia State and BYU.

Tennessee last beat the Tide 16-13 in 2006 – the season before Saban was hired as Alabama’s coach.

The battle of the Tigers will come on the 61st anniversary of Billy Cannon’s 89-yard punt return on Halloween Night in 1959 that carried LSU to a 7-3 victory over Ole Miss.

Don’t be surprised if Auburn and LSU come up with their own Halloween classic.

The last four meetings have been decided by a combined 13 points, including three consecutive victories by LSU.

Ed Orgeron, the former Arkansas graduate assistant strength coach, replaced Miles as interim coach and has held onto the job. The Tigers are 40-9 under Orgeron, including a 15-0 record last season when they won the national championship.

The World’s Largest Outdoor Cocktail Party will be considerably smaller this season with social distancing, but at least the tradition of the Gators and Bulldogs playing in Jacksonville, Fla., continues.

For Florida to win its first SEC East title since 2016, the Gators likely need to end Georgia’s winning streak in the series.

LSU ended an eight-game losing streak against Alabama last season when the Tigers won a 46-41 shootout in Tuscaloosa, Ala.

That victory helped carry the Tigers to their first national championship since 2007.

If LSU is to make another run at the title, the Tigers likely need to beat Alabama. LSU hasn’t beaten Alabama in back-to-back seasons since 2010 and 2011.

But the 2011 regular-season victory, 9-6 in overtime at Tuscaloosa for No. 1 LSU over the No. 2 Tide, was bittersweet for the Tigers because Alabama came back to beat them 21-0 in the national title game in the Sugar Bowl.

Although both were charter members of the SEC when the conference was formed in 1933, the Vols and Tigers haven’t played each other a lot.

This will be their 54th matchup – and 11th since 1992 – and it was added to the schedule when the SEC decided to play 10 games against all conference members.

Two of the last 10 matchups came in the SEC Championship Game, where Tennessee won in 1997 and Auburn in 2004.

The teams last played in 2018 when Tennessee won 30-24 at Jordan-Hare Stadium.

Tennessee and Auburn played every season from 1956-91, but those annual games ended when the SEC expanded to 12 teams and split into divisions.

Alabama Coach Nick Saban has a winning record against Auburn’s Gus Malzahn in the Iron Bowl, but not by much.

Saban’s Tide are 4-3 against Auburn since Malzahn – the former Arkansas high school coach, Razorbacks offensive coordinator and Arkansas State coach – took over at Auburn in 2013.

The Tigers beat Alabama 48-45 last season to knock the Tide out of the College Football Playoff for the first time in six years.

Saban has a 157-20 record at Alabama against teams other than Malzahn’s Tigers.

Since the SEC expanded to 12 teams and two divisions in 1992, East rivals Florida and Tennessee always have met in September, except in 2001 when their game was delayed until December because of terrorist attacks on the United States on Sept. 11 of that year.

In this upside-down coronavirus season, the Gators and Vols are scheduled to meet in the finale.

It’s possible that by the time this game is played, the SEC East already will have been won by Georgia or Florida. Maybe even Tennessee.

But there’s also a good chance this game will have championship implications for the Gators or Vols — and maybe both — as so often was the case in their early-season matchups of the past.