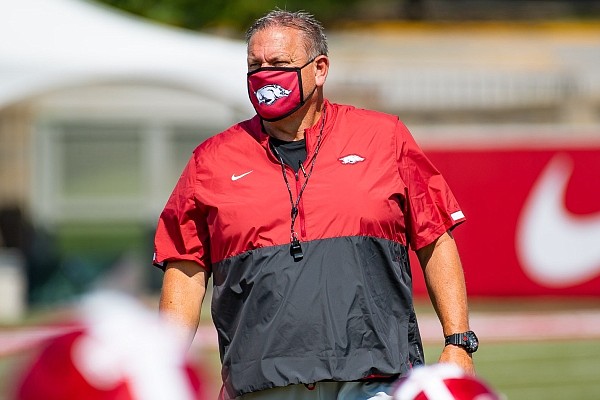 Arkansas football coach Sam Pittman is shown during a preseason practice on Sept. 7, 2020.

FAYETTEVILLE — Three months after Sam Pittman lobbied hard for and ultimately landed the head coaching job at the University of Arkansas, the world was turned upside-down by the coronavirus pandemic.

The virus is taking college football along on its crazy ride this fall and perhaps beyond.

There is no other way to frame Pittman’s debut season outside the borders of how he and his first-year staff will lead, develop and manage the Razorbacks this fall through the ongoing crisis.

It is a tough hand, no doubt.

When the SEC opted for a conference-only season and added two games to each team’s schedule it was as if the Razorbacks were already the designated whipping boys, and they were gifted games against No. 4 Georgia and No. 8 Florida.

Arkansas will be the only program in the nation among the 77 FBS schools scheduled to play this fall that is facing seven teams ranked in the preseason Associated Press top 25 poll.

Pittman has handled questions about the brutal schedule in stride.

“The SEC is the best and that’s where Arkansas belongs, with the best,” Pittman said. “We’ve got an incredible opportunity ahead of us.”

Pittman went on to call it “the toughest schedule in the country,” and noted college football analyst Phil Steele agreed, assigning it the No. 1 spot in his rankings.

Arkansas Athletic Director Hunter Yurachek seemed to say “I’ll see your toughest schedule remark and go all in” the day the extra games were announced.

In a UA release, he said, “We already owned the nation’s strongest 2020 football schedule, and with these additions to our SEC only schedule, we now own the most challenging schedule in the history of college football.”

This is the landscape placed before Pittman as he jumps in the saddle.

The Razorbacks enter this strangest of seasons with super-sized losing streaks of nine consecutive games overall and 19 in a row in conference play. There’s a chance Arkansas could be an underdog in all 10 games, if they can all be played. Some analysts have already put the Hogs on high alert for an 0-10 campaign.

Pittman hired a staff, headed by coordinators Barry Odom, Kendal Briles and Scott Fountain, that seems to genuinely enjoy working together and with the first-time major college head coach in an effort of building toward contending in the SEC West.

Odom, the defensive coordinator who spent the past four years as head coach at Missouri with a 4-0 record against the Razorbacks, said he thinks the players have proverbially “bought in” to what the new staff is all about.

“You look at the things that we put out in front of them and the way that they’ve attacked it,” Odom said. “Now, also everything hasn’t been sunshine and rainbows. It never is. But also Coach Pittman has done such an amazing job on laying out the plan and just being honest and transparent and showing them that this is the way we’re going to do things, this is our program, giving them the roadmap of what it looks like.

Arkansas players are determined to start reversing their fortunes.

Ace tailback Rakeem Boyd said one of the reasons he returned after his 1,133-yard season was to help turn the program around.

“My real reason for coming back is to help Arkansas get some more wins and go to a bowl game,” Boyd said in the spring, adding the Briles offensive system is right up his alley. “Maybe we can win five more games.”

Senior defensive end Dorian Gerald is back from a neck injury that cost him virtually the whole season in 2019.

“The coaching staff has done a really good job of coming in and coaching us up,” Gerald said. “Setting expectations to what we want and what we need.”

The Razorbacks had no spring practices due to the pandemic, but they had extensive meeting time and walk-throughs that went beyond what the NCAA normally allows. Those could be of great benefit to the Razorbacks.

“We went through a summer and had all these meetings online, and I think that was huge,” junior linebacker Bumper Pool said. “It’s usually our coaches leave, and we don’t have as much meetings in the summer as we did this year.

“It’s been huge. We go over those installs over and over again. When you’re on the field, you feel like you’re not even missing a step. It’s translating well.”

Pittman and his staff began bolstering the roster this winter with veteran talent to go along with a solid recruiting class, which checked in at No. 30 on the 247Sports composite rankings.

Grad transfer quarterback Feleipe Franks is in line to win the starting job, supported by four returning offensive line starters and a bevy of skill talent.

Boyd is the offensive stalwart with emerging backs behind him, while Mike Woods, Treylon Burks and Trey Knox form the nucleus of a potentially strong receiving unit.

Myron Cunningham has bulked up to 320 pounds to man the left tackle spot. He and projected starters like Ricky Stromberg and Beaux Limmer are noticeably bigger and stronger.

“I think we’re going to be good come season time,” Cunningham said. “We’re going to be a lot better just because of the added size and added strength, and especially with this tempo offense, we’re all going to be in better shape for it.”

Franks will be one year removed from his ankle surgery when the Razorbacks kick it off against Georgia on Sept. 26.

“My main focus and my main goal is to help Arkansas football win,” Franks said.

The senior, who passed for 2,457 yards, with 24 touchdowns and 6 interceptions while leading Florida to a 10-3 record and No. 7 final ranking in 2018, thinks a 10-game SEC-only schedule is awesome.

“I love the competition, me personally,” he said. “These guys here, they love competition. So I think it’s a chance for Arkansas to get their name out there. Not necessarily get it out there but you know come out to get some wins vs. SEC opponents.”

Odom’s aim in the spring was to build in versatility in coverages and assignments in case the coronavirus sidelined key players throughout the season.

“I love it,” Foucha said. “I love this defense. It puts me in the best spots. It puts all our corners in the best position, not being just one-dimensional. Our nickel, the defense, this is the first time introducing me in this scheme, planning it. I love it. It feels like it has been with me because of how Coach Odom teaches it to us and how enthusiastic he is about it.”

Despite losing defensive linemen Agim, T.J. Smith and Gabe Richardson, the coaching staff sounds enthusiastic the front could be solid and deep. Clemson grad transfer Xavier Kelly is expected to team with Jonathan Marshall as strong interior players, while Gerald and junior college transfer Julius Coates, one of the most talked about players in camp, figure to start at end. That allows well-regarded second-year players Mataio Soli, an 11-game starter last year, Eric Gregory and Zach Williams opportunities to provide quality relief and potential starts.

The linebacking crew has a chance to be deep, with veterans Hayden Henry and Grant Morgan in the rotation with Pool and others. Deon Edwards and Andrew Parker got lengthy time with the top unit in camp and should be improved.

The secondary could be described as “veteran” with a dash of new blood. Brown, McClellion, Foucha, Greg Brooks Jr., LaDarrius Bishop and Myles Mason all have starting experience, and youngsters Jalen Catalon, Devin Bush, Myles Slusher, Nick Turner and Jacorrei Turner should be in position to contribute.

Arkansas should have two of the better return specialists in the SEC with senior De’Vion Warren and Burks on kickoffs and punts, respectively. Duke transfer A.J. Reed and Matthew Phillips are battling for the starting placekicker job, while Michigan transfer George Caratan appears to have moved ahead of Sam Loy and Reid Bauer at punter.

Pittman, whose calm delivery in his speech seems to parallel his even-tempered approach, said he and his coaching staff will guide players through encouragement and building up rather than negativity and harsh scolding.

“If somebody does something well, we need to be the loudest at practice at that point,” he said. “If they do something wrong or make a mistake, we need to teach that. That’s what needs to happen.

“We need to be teachers in times when they need to be taught and when they do something well, we need to bring the energy. I have a staff that believes in that same thing.”

So Pittman and his staff are investing in a confidence game at the same time they’re trying to navigate a ferocious schedule in the midst of a lingering pandemic.

Instilling toughness was a top priority during the lengthy preseason schedule, which features 25 practices in 40 days before the opener at Reynolds Razorback Stadium.

Pittman and the staff have made it clear the players have to claim ownership of their destiny.

“He doesn’t babysit us,” Woods said. “He just says this is our team and he let’s us self start. Obviously he’s gonna get on us if we’re not self-starting. But as far as all that motivating ‘let’s go to work’ and this is y’all’s team, so y’all are going to run your team like you want to run it and how you want to look in the fall. So he lets us pretty much handle and self-start ourselves.”

“He really relies on us,” Brown said. “We are a player-led team. We don’t really rely on the coaches. We rely on the players. At the end of the day we’ve got to play.”

Burks, a sophomore, has been up front about the change in leadership from the Chad Morris regime to Pittman and company.

“Coach Pittman, he cares about his players,” Burks said. “Every day, it’s not a down-hard grind every day. He gives us a little time off. But I just like the fact that even the highest player, he’ll get on to them. He’s going to treat everybody the same. Even a walk-on or me, anybody, Rakeem [Boyd], he’s going to treat everybody the same. I just like that he’s an all-around good man, and that’s what we need on our staff.”

The Razorbacks would like to put consecutive 2-10 seasons with 0-8 SEC records in their rear-view mirror as soon as possible.

“We’ve had strong leadership from all positions. … The coaches are putting all the confidence in us. We really owe a lot to them.”