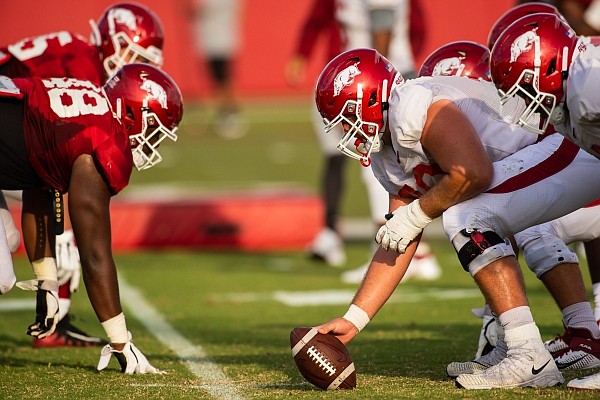 Arkansas football players line up before a play during a preseason practice on Sept. 15, 2020 in Fayetteville.

1 – Will the Hogs break their twin losing streaks against a brutal 10-game SEC schedule?

I think the Razorbacks will have a chance in Week 2 at Mississippi State, and if they don’t do it there, they will break through at home against Ole Miss in Week 4. Even during the chaos of the last two years, the Razorbacks were close in multiple games, and we’ve got to think they will be more organized and tougher this time around, key qualities in winning tight games.

He’ll have to average 100 yards per game to hit 1,000 with the reduced schedule, so this seems unlikely. Boyd was not overloaded last season, averaging 15.3 carries per game, so if he stays healthy there’s no reason he couldn’t boost that closer to 20 per game. His stout 6.2 yards per carry, propelled by four touchdown runs of 70-plus yards, will be hard to duplicate.

3 – Where will leadership come from, particularly on defense, after key losses?

Linebackers Grant Morgan, Hayden Henry and Bumper Pool should also be in positions of on-field direction not only for their position on the second tier but also their veteran status.

Up front, the coaches want end Dorian Gerald to be more vocal. Jonathan Marshall is a senior, but he’s not super expressive. Clemson transfer Xavier Kelly has a chance to earn respect and lead in his final season.

Whew, an easy one. Barring injury, Franks is the man. A tougher question is projecting his stats in a 10-game slate.

Hopefully the coaches work KJ Jefferson in with some regularity and give true freshman Malik Hornsby a few good looks while retaining his redshirt. The latter might be difficult owing to the strange preseason and the difficulty of Arkansas’ schedule.

5 – Will the defense be statistically better?

It has to be, right? It seemed like this unit let go of the rope for coordinator John Chavis after the back-to-back tough losses vs. Texas A&M and at Kentucky last year. The group allowed a grotesque 450 total yards, 221.5 rushing yards and 36.8 points per game. Opponents converted a bloated 46% of their third-down plays.

Can the Razorbacks drop those numbers to more like 390 total yards, 170 rushing yards, 30 points and 38% third downs? Those are not great numbers, but if Arkansas can trim down production by that much the Hogs will have a chance to win some games.

6 – Will the offense be statistically better?

All signs say yes. The Razorbacks should improve on 340 total yards and 21.4 points per game, which both ranked in the bottom 16% of all 130 FBS teams last year. Here’s what is tough: Every game is against an SEC opponent, most of whom can either match or exceed the Razorbacks’ talent.

The offensive line should get an immediate benefit from the presence of two of the most highly regarded OL mentors in the game in position coach Brad Davis and Coach Sam Pittman.

7 – Who will lead the team in receptions?

If the passing game is improved to any degree with Kendal Briles calling the shots for quarterback Feleipe Franks, expect Woods, Treylon Burks and Trey Knox to all push past the 35-catch mark for an average of better than 3.5 receptions per game.

8 – How did the Razorbacks wind up with games against Georgia and Florida?

The SEC gave no rationale on how associate commissioner Mark Womack delegated the additional two SEC games per team. The appearance of “protecting” conference powers Alabama, LSU, Georgia and Florida looks real. Did you notice how, when there was a report that several SEC coaches were upset and asking on a video conference for some accountability on how the games were decided, the topic faded very quickly? The SEC is crafty at reining in dissent.

9 – Who will lead the team in tackles?

Linebacker De’Jon Harris held this distinction the last three years so it stands to reason another linebacker will take over the lead. Bumper Pool, a junior with plenty of starts under his belt, would seem the logical choice, with senior Grant Morgan also a strong possibility. For an outside shot, safety Joe Foucha, who should get some license to roam, is a possibility but with longer odds than the linebackers.

10 – How long until the Razorbacks are contenders again?

Great question. If anybody knew this for certain, there would be much money to be made in Vegas.

A few strong classes stacked on top of each other, with a backbone of offensive and defensive linemen, enhanced by speed and size all over the field and quality quarterback development has to take place in the coming years. That’s a big ask for as early as 2021. But the key is implementing a system that can encourage, sustain and develop through the rough times, of which there’s certain to be plenty this fall. Three wins this season, maybe five or six in 2021 seem doable. Pushing to eight wins or beyond in any of the next three years would be a significant achievement.