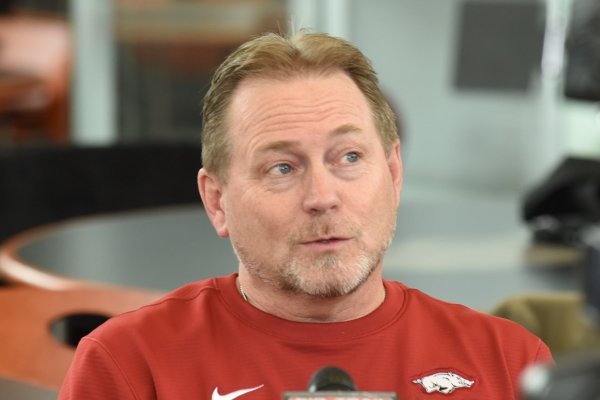 Scott Fountain, an assistant coach with the University of Arkansas football team, speaks with members of the media Thursday, Feb. 6, 2020, inside the Fred W. Smith Football Center on the campus in Fayetteville.

The nation's top junior running back, Emmanuel Henderson is considering a visit to Fayetteville in large part because of University of Arkansas assistant head coach and special teams coordinator Scott Fountain.

Fountain's relationship with Henderson started while Fountain was on the staff at Georgia.

"Oh man, Coach Scott Fountain we talk a lot," Henderson said. "One of his friends coached at my school, so I've been connecting with him for awhile when he was at Georgia. We've always had a good relationship. He's just a good man. He's always truthful. He doesn't always tell you what you want to hear, he tells you everything you need to hear."

ESPN rates Henderson a 5-star recruit, the No. 1 running back and the No. 11 overall prospect in the nation for the 2022 class. Fountain has Henderson intrigued about the Hogs.

"I don't know much about Arkansas right now, but I'm really sure I want to come up and visit," Henderson said. "Take a trip and see what they're about an see how the community is and the atmosphere is and things like that."

Henderson rushed for 1,996 yards and 32 touchdowns on 157 carries as a sophomore for the Class 2A Bulldogs. He also had 23 catches for 342 yards and 4 touchdowns.

He's started strong this season with 787 yards, 13 touchdowns on 74 carries while helping his team to a 4-0 record.

National recruiting analyst Tom Lemming of CBS Sports Network saw Henderson in early March and has him rated as a 4-star plus prospect but plans to see him again on Oct. 31.

A three-sport athlete, Henderson also excels in basketball and track and field. He has a basketball offer from Alabama State, runs the 100 meters and anchored the 400-relay team as a sophomore.

Henderson, who has a grade-point average that's above 3.0, is considering physical therapy or sports marketing as his major in college.

"I'll probably be a trainer or I'll probably want to go back and coach at the college I play for," Henderson said.

Football is like a way of life for Henderson, who has played the game most of his life.

"It's a mental thing you have to have love for it," Henderson said. "You have to be tough to play the game. I've been playing football since I was five years old and I've always loved it sine then."