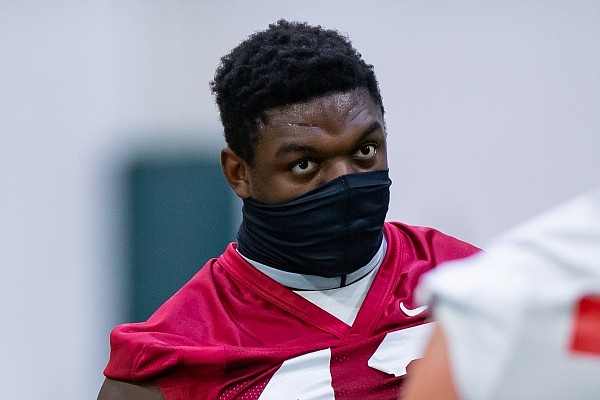 Arkansas defensive lineman Jonathan Marshall is shown during a preseason practice on Aug. 17, 2020.

FAYETTEVILLE — The four captains for the University of Arkansas — seniors Rakeem Boyd, Feleipe Franks, Jonathan Marshall and Grant Morgan — were the first game-week interviews of the season for the Razorbacks on Tuesday night.

Naturally, the quartet talked about what it meant for their teammates to select them to lead.

“Oh man, it’s an honor,” said Boyd, whose 1,133 rushing yards are the third most for a returning SEC running back. “That means a lot to me, my family, just everybody around here in my support system.

“Getting to be looked at like that, it was a complete blessing and I appreciate all my teammates.”

Franks, a grad transfer from Florida, got the distinction in his first season at Arkansas.

“I was definitely touched by it,” Franks said. “It’s a big deal for the guys to think of me like that in a short period of time. I’m nothing but grateful, like I told them guys. I’m touched by it and it’s awesome.”

Coach Sam Pittman, speaking on his radio show last week, said: “I thought the kids made a wonderful choice of the four guys that they chose, however there’s a lot more than that who have shown leadership skills and I’m awful proud of them as well.”

Morgan, a Greenwood product and the lone native Arkansan among the captains, said Franks leads naturally through his passion for the game.

“He might not always be the guy to speak up at certain times, but I know when he speaks up, there’s passion in everything he says,” Morgan said. “He means what he says. He’s not a guy to just talk gibberish.”

Marshall might be one of the most quiet captains the Razorbacks have selected in many seasons.

“I really don’t speak much,” Marshall said. “So them coming in seeing my work ethic and then voting me as a captain was really a blessing. Because not too many people get named captain and they don’t speak as much. It was really an honor.”

Quarterback Feleipe Franks has not been in a game in more than a year after suffering a broken ankle Sept. 14, 2019, during Florida’s 29-21 victory at Kentucky.

He entered the transfer portal, rehabbed his ankle, moved to Arkansas and dealt with a health pandemic in the past 12 months.

“Oh man, it’s wonderful,” Franks said of getting on the field Saturday. “I’ve been waiting to play some college football again.

Tailback Rakeem Boyd said the thought of opting out of the season didn’t appeal to him.

Arkansas will enter Saturday’s game against No. 4 Georgia with an all-time record of 99-23-4 in season openers, including a 67-11-2 mark in games played in Fayetteville.

The Razorbacks have won their last five season openers after losing at Auburn 45-21 in 2014. Their last loss in an opener at home was 50-14 to Southern California in 2006.

Georgia Coach Kirby Smart was asked Monday about the Bulldogs’ schedule “really picking up with tough SEC opponents” after Arkansas, and why the opener was important to “set the tone for more difficult games down the road.”

“It’s the first game with a new coach, new players,” Pittman said. “We shouldn’t need anything extra to motivate us.

“Kirby Smart, I can promise you, is preparing for us as hard as he would Alabama. That’s his makeup. Very, very outstanding coach, and he’ll have his team prepared to the max regardless of what the point spread line is. If we need motivation, it won’t come from anybody’s comments. It’ll come from inside.”

Smart said the first game is an opportunity for the Bulldogs to create their identity and figure out their team leaders.

“We know this is one game of many we’ve got to play in a really tough road [schedule],” Smart said. “But we’re focused on this one and this one only.”

Blankenship, coached at Georgia by current Arkansas special teams coach Scott Fountain, made all 200 of his career extra points, extending Georgia’s streak to an NCAA-best 291 straight without a miss dating to 2014.

Georgia trails only Alabama and Clemson in consecutive weeks ranked in the top 10 of The Associated Press poll.

Both Alabama and Clemson have been in the top 10 for 78 consecutive weeks stretching back to 2015.

The Bulldogs have been in the top 5 for eight consecutive polls, second only to Clemson (41).

The SEC Network crew assigned to the Georgia-Arkansas game is Dave Neal on play by play, former Georgia quarterback D.J. Shockley with analysis, and Tera Talmadge, of KNWA-TV in Fayetteville, as the sideline reporter.

The Big Ten, which on Aug. 11 became the first conference to announce it was canceling fall sports, reversed course and said last week it would begin playing football Oct. 24.

The Big Ten is planning to have an eight-game schedule without any open dates and finds itself playing catch-up to the SEC, ACC and Big 12.

Arkansas Coach Sam Pittman is happy about the conference’s return.

“As far as the Big Ten, I’m awful glad that they decided to play because their players have worked extremely hard to be able to get out on the field,” Pittman said. “I’m proud for those players and those coaches in that league.”