Respect for Franks in multiple locales 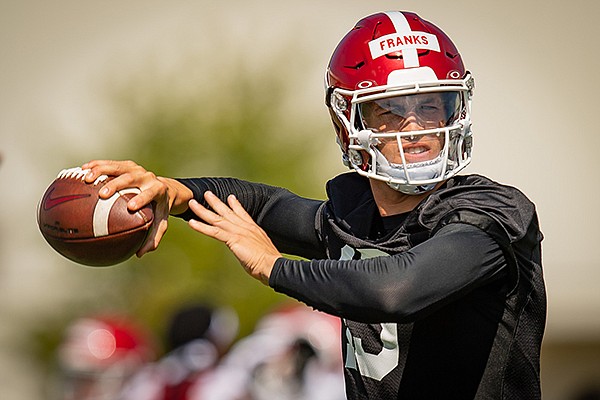 What an incredible and unlikely journey for Feleipe Franks and the Arkansas Razorbacks.

The Razorbacks have had more quarterbacks in the past two years than the Florida Gators generally do in a decade.

In the past two seasons, eight different quarterbacks have started for the Hogs.

As the old saying goes, when you have eight quarterbacks you don’t have a quarterback.

On the other hand, Franks’ wildest imaginations couldn’t have dreamed up that he would be starting Saturday in Fayetteville for the Razorbacks.

He was a 4-star recruit who first committed to LSU before deciding to stay home and become the Gators’ quarterback.

He started 11 games as a strong-armed, 6-6 freshman, and he struggled at times.

Enter Dan Mullen as Florida head coach. It appeared to be a great marriage in 2018 when Franks led the Gators to a 10-4 record while passing for 2,457 yards and 24 touchdowns with just 6 interceptions.

To Gator Nation, he looked like a typical Florida quarterback: an All-American in waiting.

Last season, Franks started the first four games before being hurt and lost for the season.

It became obvious Mullen was going in another direction, but Franks never complained and became the team’s No. 1 cheerleader while rehabbing.

That was the intangible that endeared him to the Florida fans.

He was a fierce, unselfish leader who was loved by his teammates.

After the season, he quietly put his name in the transfer portal. Sam Pittman, who had seen Franks up close and personal as a Georgia assistant, pulled out all the stops. And Franks liked everything about Pittman and offensive coordinator Kendal Briles.

The biggest concern going into Saturday’s game against powerhouse Georgia is that Franks hasn’t really had enough time to get on the same page with the receivers.

The quarterback and receivers have to understand every nuance of each other, and that takes time that was not afforded to Franks when spring football was canceled and fall practice was limited.

He’s wowed everyone with his perfect spiral throws, short and long — sometimes very long. But perhaps the biggest attribute has been that intangible of leadership.

The team voted him one of four captains. Pittman has mentioned several times how indicative that is of the respect the players have for Franks.

The Razorbacks will need all Franks and his teammates have against Georgia, which is expected to have one of the top defenses in the country with eight starters back from a team that went 12-2 last season while allowing 176 points, the SEC’s best total.

A year ago there was far too much expected of transfers Ben Hicks and Nick Starkel. Franks should be allowed to take on this season without that pressure.

No modern-day quarterback — maybe any quarterback ever — has faced a schedule like the one Franks and the Razorbacks were presented, which is brutal times 10.

More than likely, Franks feels he has unfinished business in the SEC.

That perhaps he has something to prove.

Just don’t be surprised on Nov. 14 when he gets a standing ovation before the Razorbacks take on his old team in Gainesville.

He was and remains widely respected by his former teammates and the fans, and there’s a reason: He’s a natural leader.