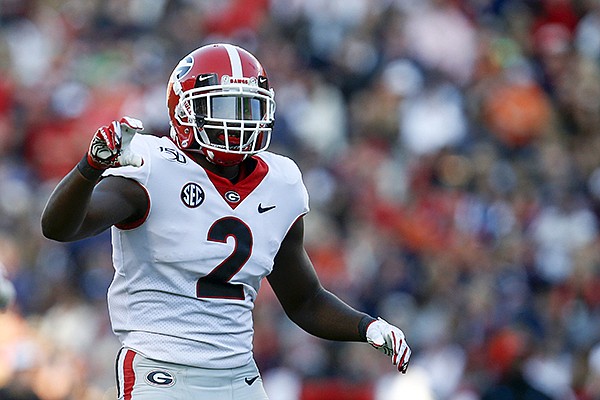 Georgia defensive back Richard LeCounte (2) signals a play during the first half of an NCAA college football game against Auburn, Saturday, Nov. 16, 2019, in Auburn, Ala. (AP Photo/Butch Dill)

During Monday’s Zoom press conference it was remarked to Arkansas Coach Sam Pittman that someone said the Georgia Bulldogs field the nation’s best defense.

“My thought would be whoever said they were, they’re correct,” Pittman said.

“The thing they do as good as anybody in the country is they run to the football,” Pittman said. “And when they get there, they’re gonna let you know they’re there. I know because I’ve coached there the last four years.”

Pittman delves just into his ninth Arkansas month. Spring ball was canceled by national covid-19 concerns. The SEC football schedule was revised to 10 all SEC games and the start of preseason practice delayed until Aug. 17.

So has anything gone better this harried preseason than he thought it might?

“I don’t know if it’s any better than what we thought we might get,” Pittman said. “A big reason for that has been covid. It’s hard to get continuity with quarantine and covid. If it wasn’t for that, I think we’d be right on schedule. But we’re not the only team in the country affected by that. Everybody is.”