Time to lift the curtain on Pittman era 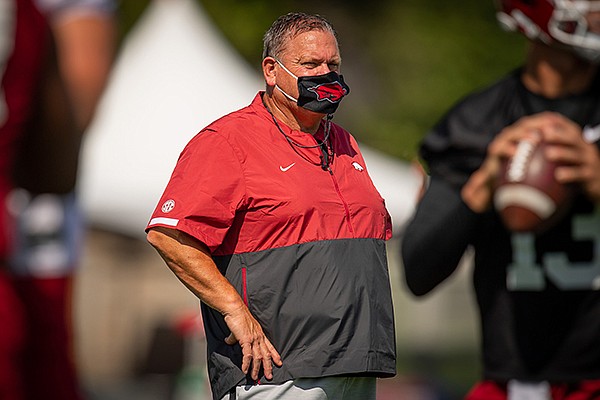 FAYETTEVILLE — Months and months of angst over bad football, a regime change, a worrisome pandemic and a month-long delay to the season have led to this for University of Arkansas fans.

The Razorbacks will kick off the season at 3 p.m. today at Reynolds Razorback Stadium as a huge underdog against No. 4 Georgia.

But at least real football is here. And the the story lines are legion.

“Not in my wildest dreams did I believe we would start with the University of Georgia since I had just come from there,” Pittman said.

“I’m looking forward to seeing my dear old friend Sam Pittman,” Smart said. “It’s been a long time this offseason in terms of players being excited and the uncertainty involved in this year.”

Then there are the losing streaks for Arkansas, which was picked to finish last in the SEC West in media polling. The Razorbacks have lost 19 consecutive SEC games dating to late 2017, and nine in a row overall. They have not celebrated a victory in more than a year, going back to a 55-34 win over Colorado State on Sept. 14, 2019.

Pittman has a big jump over his predecessor Chad Morris in that he was already a fan and player favorite in the Razorback Nation based on his successful stint as offensive line coach and assistant head coach from 2013-15.

Arkansas tailback Rakeem Boyd returned for his senior season, in part due to the presence of Pittman, and he’s juiced to get started.

“I’m going to be honest, I can’t sleep,” Boyd said Tuesday. “I love ball so much I can’t even sleep right now, and it’s a blessing that we’re just getting through all of this … and get to showcase what the Razorbacks are really about.

“I’m ready for y’all to see what we have in the tank. It’s amazing. I’m just blessed that the whole team got through COVID and every other team and everybody has just been handling it well. It’s been tough, but it’s good to see SEC football back this weekend. It should put a lot of smiles back on people’s faces.”

Another angle: How in the world did Arkansas draw both No. 4 Georgia and No. 5 Florida from the SEC East in the two bonus games assigned by the SEC office after the switch to an all-conference schedule? The Hogs are the only team that will face all seven SEC programs ranked in the preseason Associated Press Top 25 poll, leading Athletic Director Hunter Yurachek to declare — without sarcasm — Arkansas’ slate is the toughest in college football history.

“When I took the head coaching job, I felt like I knew exactly what I was going to inherit and exactly the facilities here and everything,” Pittman said on his radio show Wednesday. “And I wanted it. I wanted every bit of it. I wanted every one of our players.

“So you’re looking at Georgia, and they look a little bit different than we do right now. They’re really big on both sides of the line of scrimmage. They’ve got a lot of talent.”

The Bulldogs, three-time defending SEC East champions, are the pick of some analysts to reach the College Football Playoff for the second time in four years.

Smart, who is 11-0 as an assistant coach against the Razorbacks, quickly rebuilt his alma mater with the aid of Pittman and others after taking over in 2016. He understands what it takes to put the pieces together.

“I mean, I think it starts with the belief and the people in the organization and their belief in each other,” Smart said. “It always starts with that. It starts with a core foundation in your weight room, a belief that you’re going to compete and you’re gonna get better.

“Everybody wants to go out and win every game, but when you’re building a program you’re trying to build the trust, faith and confidence in the organization and the people in the organization that you’re going to get better. Each step you take is a better opportunity. It’s not a league for the faint of heart. I can promise you that. It’s a tough, physical league.”

To that end, the Razorbacks devoted themselves to adding beef virtually across the board, and they are in the beginning stages of that reshaping.

“I think guys are starting to realize that the physicality of the game is what’s going to separate you from those close wins and losses,” Arkansas linebacker Bumper Pool said on Pittman’s radio show.

The quarterbacks projected to play big roles in today’s game have all overcome major obstacles in the past year.

Arkansas starter Feleipe Franks suffered a broken ankle last September as the starting quarterback at Florida. He quickly gained the confidence of his new teammates to the point he was elected as a team captain, along with Boyd, defensive tackle Jonathan Marshall and linebacker Grant Morgan.

“The mindset is to win,” Franks said. “If it’s anything other than that, something is wrong.

“We’re not looking at it as a 10-game SEC schedule and things like that. Our mindset is to go out there and execute our game plan. Go out there and at the end of the day and get a win. Do anything possible to get that win.”

For Georgia, redshirt freshman D’Wan Mathis fought back from a craniotomy, and sophomore transfer JT Daniels has recovered from a torn knee ligament.

The Bulldogs’ offense, which suffered major personnel losses, will try to gain its footing under the new quarterbacks by leaning on the offensive front, and tailbacks Zamir White, James Cook, Kendall Milton and others.

“It’s a great challenge for all the D-lineman to go against these guys,” Marshall said. “They’ve been pretty good up front. It’s really a great opportunity and challenge.”

The Bulldogs’ massive front will be opposed by an Arkansas defense now coordinated by Barry Odom that has promised multiplicity and versatility during the long lead-up to the season. The Razorbacks were afforded the opportunity to study multiple fronts, coverages, personnel groupings and blitz schemes despite not going through spring drills.

“We will see as good a defense as we will all year on Saturday,” Pittman said.

The Bulldogs will wear red pants instead of their traditional “silver britches,” as a tribute to their 1980 national championship team.

The Razorbacks would just like to start establishing a fresh identity in Year One under Pittman after going 1-23 in league play the past three years.

“We’re going to go in with a chip on our shoulder every single game just because we’re the Arkansas Razorbacks,” Morgan said. “I doubt we’ll be favored in any game this year. I haven’t looked at any of that stuff, so we’re just going to go be who we are.”

Pittman said this week he was pleased with the Razorbacks’ COVID-19 testing numbers but added some players will not be available for the game. Nearly every SEC school has kept its positive testing numbers and its number of players in quarantine out of the public. However, every SEC team must reach mandatory minimums with its roster, including 53 cleared scholarship players, in order to compete.

The Razorbacks know expectations for them are low throughout the SEC, with some media members calling for an 0-10 record.

“I think words are just words,” Pool said on radio. “If we go to work, all those doubters and everything that people saw from last year will go away.

“You can’t put those things to bed until you actually go and prove yourself. I think that’s kind of the mindset we have. Let’s not do any talking. Let’s just go out there, work hard and let the game speak for itself.”

The Arkansas players seem convinced Pittman was the right man to lead a revival.

“Yes, there were some mistakes from the last staff, but I think there’s stuff that we can grow from there,” Pool said. “Then, when Coach Pittman came, it’s like this new spark, this new energy kind of hit this whole team. And a new mindset I think is the biggest thing.

“Obviously seeing Coach Pittman’s love for Arkansas excites all of us, because you have to really love it to coach here. And you can definitely tell that he does, and I think that’s kind of spread throughout our whole team about just being proud to be a Razorback.”