Gerald questionable, Razorbacks to return 3 to practice this week 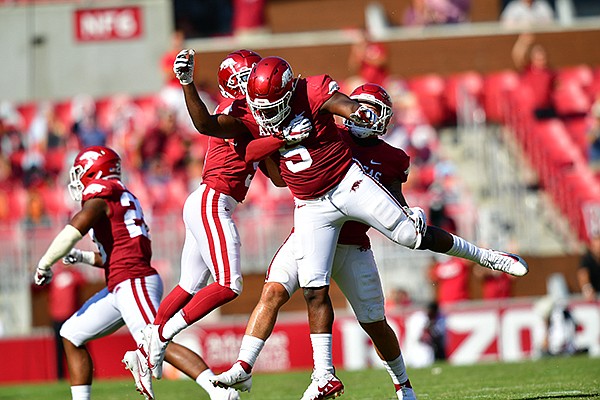 Arkansas defensive end Dorian Gerald (5) celebrates with teammates after recording a sack during a game against Georgia on Saturday, Sept. 26, 2020, in Fayetteville.

FAYETTEVILLE — Three Arkansas defensive players will return to practice this week, but the status of one of the Razorbacks' defensive starters is unknown.

Senior Dorian Gerald is "wait and see" with an ankle injury he suffered during the second quarter of the Razorbacks' 37-10 season-opening loss to Georiga, Arkansas coach Sam Pittman said Monday. Gerald had four tackles and 1.5 sacks prior to the injury.

"He obviously turned his ankle," Pittman said, "so we’ll have to wait and see what comes out of that."

Gerald is still listed as Arkansas' starter at the JACK position, which is a defensive end position that can turn the defense into a 4-3 or 3-4 look, based on whether he puts his hand on the ground. Sophomores Mataio Soli and Zach Williams are listed as backups to Gerald at the position.

Pittman said Soli and defensive backs Devin Bush and Jarques McClellion will return to practice this week. None of those three players played in the game against Georgia, and no reason was given for their absences.

Their return might provide more depth to Arkansas' defense in preparation for what is likely to be one of its hardest offenses to prepare for this season. Mississippi State is coming off a 44-34 victory at LSU during which it passed for 623 yards.

"We need to play more players on defense," Pittman said. "I think we got tired. We played a lot of snaps in the first half and about the same in the second half."