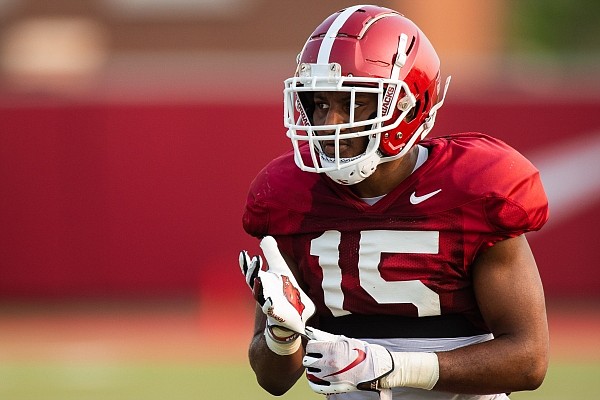 Arkansas defensive back Simeon Blair looks on during a play in a team practice on Sept. 19, 2020 in Fayetteville.

FAYETTEVILLE — The month of September has been especially good to Arkansas defensive back Simeon Blair.

Following the Razorbacks' first day of preparations for Georgia on Sept. 18, first-year head coach Sam Pittman announced that the redshirt sophomore from Pine Bluff had been placed on scholarship along with offensive lineman Luke Jones, who transferred from Notre Dame.

Pittman raved about Blair's unselfish attitude and ability to provide Arkansas a lift in a number of areas.

"I think he's starting on four special teams for us," he added. "He also has a role on defense, but you know, he's a guy that, to me, you want on your football team. (He) works hard and he's going to help us on (special) teams. That's a big deal for us.

"To me, if you start on all four teams, you're a starter, so I think he's earned that."

Entering Week 1 against the No. 4 Bulldogs, Blair was listed on the Razorbacks' depth chart as the third-team option at strong safety. However, in the current covid-19 climate, no depth chart is set in stone.

When Arkansas' defense took the field on Saturday, Blair was among five players – Jalen Catalon, Jonathan Marshall, Julius Coates and Isaiah Nichols were the others – making their first career start. And he certainly contributed to the unit's better-than-expected showing against Georgia.

"He did a really nice job for us," Pittman said Monday. "He’s smart, he plays hard, he starts on a couple of special teams. Joe Foucha was out for a few days. Simeon stepped right in there, and obviously we got Joe back a couple of days before Saturday. Joe’s first practice might have been on Thursday of last week.

"I was really pleased with the way Simeon played. He’s detail-oriented and he played really hard."

His pass breakup in the first quarter showcased quality instincts. With Georgia facing second-and-10 at its own 25, Blair jumped a five-yard out route by Bulldogs receiver Kearis Jackson and saw quarterback D'Wan Mathis' pass slip through his hands.

Blair jumped up off the Bulldogs' sideline wagging his right index finger, and defensive end Dorian Gerald was the first to meet him and celebrate the play.

"(Arkansas) was late getting lined up, and Blair ran right to the route," SEC Network analyst DJ Shockley said on the game broadcast. "He had a chance for an interception there. That's probably one he wishes he had back."

Catalon, the redshirt freshman safety from Mansfield, Texas, was thrilled for Blair. Knowing his story and how far he has come as a person and player makes it even easier to pull for Blair, he added.

As the Razorbacks gear up for Mississippi State and an Air Raid offense that put up 623 passing yards at LSU last weekend, Blair is listed as one of two options to start for Arkansas at boundary safety.

"I'm so proud of him," Catalon said. "Coach (Pittman) stressed that everybody has to be able to step in and do their job. I think today you saw that. Like I said, I'm proud of Blair for stepping in last minute, finding out he was going to start, and making the most of it, and making the plays that he did.