Hogs, Aggies in top 10 ahead of weekend showdown 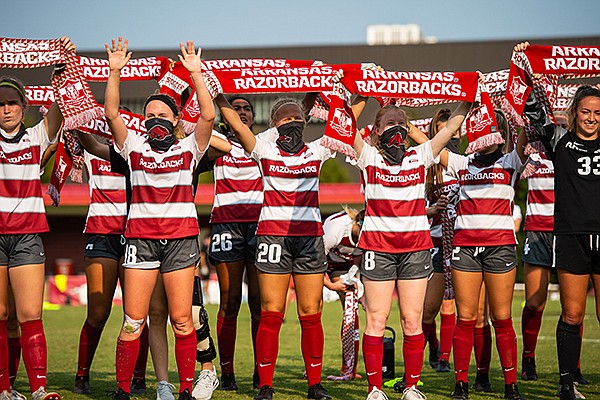 Arkansas soccer players take part in a postgame hog call following a 2-0 victory over LSU on Saturday, Sept. 19, 2020, in Fayetteville.

FAYETTEVILLE — For the first time, Arkansas is scheduled to host a top-10 soccer matchup this weekend.

The Razorbacks moved up four spots to No. 9 in this week’s United Soccer Coaches top 15 poll. Next up for Arkansas is a game against No. 5 on Texas A&M that is scheduled to begin Sunday at 2 p.m. at Razorback Field.

Podojil national player of the week

Arkansas has played in one top-10 matchup in its history, a 1-0 loss to South Carolina in the championship game of the SEC Tournament last November when the Razorbacks were ranked sixth and the Gamecocks seventh in the coaches poll. Arkansas had never been ranked in the top 10 prior to last October.

Sunday’s game is expected to be significant to the SEC standings. The Razorbacks were picked by coaches to win the SEC in the preseason, while Texas A&M was predicted to finish third in the conference and second in the SEC West.

Arkansas (2-0) has won games over LSU and Kentucky by a combined score of 6-1 this season. The Aggies (1-0) defeated Ole Miss 3-0 in their season opener, but had a game against Auburn postponed last week because of covid-19 quarantines.