Hogs look for fixes ahead of Mississippi State 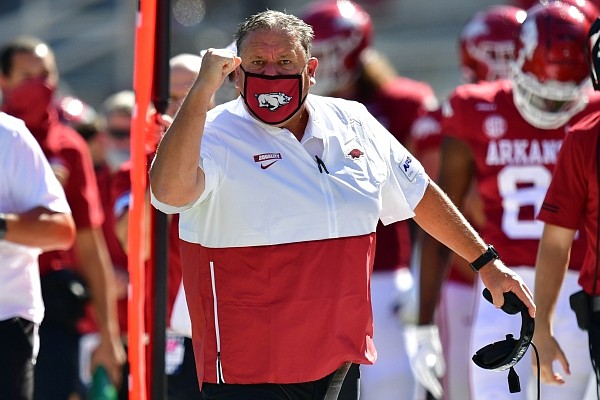 Arkansas football coach Sam Pittman reacts to a play during the Razorbacks' season opener against No. 4 Georgia on Sept. 26, 2020 in Fayetteville.

FAYETTEVILLE -- While the Arkansas Razorbacks were playing two wildly different halves Saturday in their season-opening loss to No. 4 Georgia, a legend was being born in Baton Rouge.

In the Mississippi State debut of Coach Mike Leach, quarterback K.J. Costello lit up defending national champion LSU for 623 passing yards in a 44-34 shootout win on the bayou.

Mississippi State soared into both national rankings, landing at No. 16 in The Associated Press poll and No. 14 in the USA Today coaches poll. So that will give the Razorbacks (0-1) a chance to face all eight ranked SEC teams -- all in the top 21 -- on its specially crafted 10-game league schedule.

Arkansas will continue its trek through the top 25 on Saturday at 6:30 p.m. on the road against Mississippi State, which has won seven of the last eight games in the series once dominated by the Hogs. Arkansas will open a season with consecutive games against teams ranked in the AP poll for the first time.

Mississippi State, reveling in its upset, released a promo video with Leach sitting in an old-timey wagon, flying a maroon Bulldog-themed pirate flag, saying there was room on their bandwagon.

Meanwhile, first-year University of Arkansas Coach Sam Pittman was evaluating the pros and cons from Saturday's 37-10 loss to Georgia. He said in his Monday news conference the tape review from the game showed him a few things he knew going in, and revealed a few things he did not expect.

Pittman thought the Razorbacks would show better on special teams and have more precise pre-snap alignments and execution on offense.

"I don't think any of us were happy with the rhythm of the offense," Pittman said. "Too many misalignments, shifting a back from one side to the other, tight end from one side to another. Wide receiver on or off the ball. Tight end lining up on wrong side of the ball, wide. There was just too many missed assignments there.

"That slows everything down. Now the quarterback is having to get everybody adjusted. We really didn't have that problem at practice, but we did the other night. The quarterback was getting everybody lined up instead of looking at the defense seeing how we can attack that."

Feleipe Franks had an OK debut, completing 19 of 36 passes for 200 yards with 1 touchdown and 2 interceptions. He was sacked once.

Hustling into the proper position on offense has to be a cleaner process.

"That has to be a big thing for us this week," Pittman said. "We have to calm the quarterback down so he can make plays. The only way we can do that is if everyone else knows what their assignment is."

The Razorbacks gave up valuable real estate in the kicking game, stayed pinned down on offense most of the first half due to Georgia's superb punting. They also had a momentum-crushing blocked punt that led to a quick touchdown as Georgia seized control late in the third quarter.

"I think we have to be a lot better on special teams," Pittman said. "Georgia dominated us on special teams. We couldn't get off hold-ups. We obviously gave up a blocked punt on something very simple that we should've worked on it, but it just didn't happen in the game. Just blocking, basically. Special teams has to improve in a quick way."

In addition to the blocked punt, which led to a 24-yard touchdown drive, the Bulldogs had kick returns of 48 and 43 yards to set up good field position. The field goal unit drew a delay-of-game call on a 55-yard try by A.J. Reed that pushed the Hogs out of field goal range. Special teams coordinator Scott Fountain has many areas to tighten up

"One big return can be just one guy barely getting out of his spot," linebacker Grant Morgan said. "So we'll just have to go back, watch film. They definitely got a lot more yards than what we wanted to give them on special teams, but I can tell you this, no one works harder than coach Fountain.

Arkansas had eight three-and-outs on offense out of 16 possessions. Four other drives resulted in three interceptions and a safety.

"You look at the offense, I think there's still too much indecisiveness about where to line up," Pittman said. "I knew we were going to struggle up front against Georgia's defensive line. I mean, going into the game I didn't think we were going to be able to pound the ball at them. We've got to play better up front. We have to play faster and more physical up front on offense.

"We need to play more players on defense. I think we got tired. We played a lot of snaps in the first half and about the same in the second half. But special teams has to improve in a quick way. We can fix that."

"Our offense just has to be more consistent and have more urgency," Pittman said. "To me, we were just off almost the entire game."

Freshman safety Jalen Catalon said the defense, which held Georgia to 1 of 12 third-down conversions in the first half and 387 total yards for the game, made a step in the right direction.

"We'll never accept losing," Catalon said. "Losing is not what we're wanting to do. We're trying to change the culture around here.

"I think the defense definitely made a statement that it's not like how it was before. It's different now. I'm just proud of them for fighting no matter what the score was."