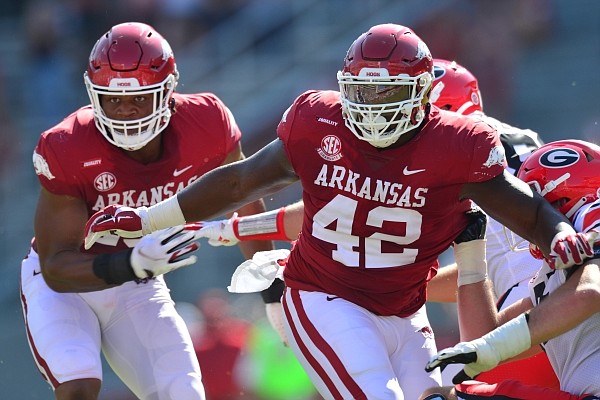 Arkansas defensive linemen Julius Coates (left) and Jonathan Marshall (right) look to make a play in the backfield in the Razorbacks' season opener against Georgia on Sept. 26, 2020 in Fayetteville.

FAYETTEVILLE -- The University of Arkansas should have a deeper roster, particularly on defense, for its 6:30 p.m. game at No. 16 Mississippi State on Saturday.

However, defensive end Dorian Gerald is questionable for the road opener after suffering an ankle injury in Saturday's 37-10 loss to No. 4 Georgia.

Pittman did not list a reason why Bush, McClellion and Soli missed Saturday's game, but Arkansas did have players miss the game due either to positive covid-19 test results or contact tracing that led to quarantines.

Foucha returned to practice Thursday, Pittman said, and played sparingly behind Simeon Blair, who made his first career start. Both players were credited with three tackles against Georgia, and they are listed as co-starters on this week's depth chart.

Both starting defensive ends -- Julius Coates and Gerald -- were injured Saturday. Coates, who finished with one tackle and one hurry, came out in the second quarter with what looked like a shoulder injury. He appeared angry going into the medical tent but emerged soon after and returned to the game.

Gerald, who had 1.5 sacks for 20 lost yards among his 4 tackles, came out with an ankle injury and did not return.

"On Dorian, I think it's just a wait and see," Pittman said. "He obviously turned his ankle, so we'll have to wait and see what comes out of that."

McClellion, a 12-game starter last season, is listed as a backup to fellow junior Montaric Brown on this week's depth chart.

Soli is listed as the backup to Gerald at the "Jack" position, which determines whether the Razorbacks are in a 3-man or 4-man front.

The Razorbacks have had five receivers post 100-yard games against Georgia, and three of them played their prep ball in Warren.

Former Lumberjack Treylon Burks is the latest Razorback with the achievement after he caught career-highs of seven passes for 102 yards on Saturday. Burks got past All-American safety Richard LeCounte for a 49-yard touchdown to open the scoring midway through the first quarter.

Chuck Dicus had 12 catches for 169 yards and a touchdown in the Razorbacks' 16-2 victory over Georgia in the 1969 Sugar Bowl.

The Razorbacks' road game at Auburn in Week 3 on Oct. 10 was selected for a 3 p.m. kickoff time by the SEC. The game will be shown on the SEC Network.

Auburn is currently ranked No. 7 in the AP poll heading into a game Saturday at No. 4 Georgia.

Mississippi State jumped from out of the rankings to No. 16 in The Associated Press Top 25 poll, and No. 14 in the USA Today coaches poll after dumping defending national champion LSU 44-34 on Saturday in Baton Rouge. The Bulldogs were up 27 places in the coaches poll after being in the 41st spot last week.

Mississippi State's 632 total yards against LSU were the second most in school history behind the 640 yards in last year's 54-24 win at Arkansas.

Mississippi State quarterback K.J. Costello earned big-time recognition Sunday by being named the Walter Camp national offensive player of the week and SEC offensive player of the week in his first game as a Bulldog. The grad transfer from Stanford completed 36 of 60 passes for 623 yards, all school records, and threw a school record-tying 5 touchdowns. The passing yards are also an SEC record, and they rank No. 11 in NCAA history.

Costello was the first SEC offensive player of the week winner for the Bulldogs since Kylin Hill ran for a career-high 234 yards and three touchdowns in a rout of Arkansas last season.

The Razorbacks put together a 91-yard touchdown drive on their second possession against Georgia, capped by Feleipe Franks' 49-yard scoring pass to Treylon Burks.

Arkansas did not have a 90-plus yard touchdown drive in 2019. The Hogs' last drive of that distance came on Oct. 27, 2018, against Vanderbilt, a 92-yard march that ended on Chase Hayden's 38-yard scoring run.

Arkansas went with a trick play -- a double reverse to T.J. Hammonds -- early in the second quarter, but the call backfired as Georgia shot defenders through the line to blow up the play.

On the snap from the Arkansas 13, quarterback Feleipe Franks gave an inside handoff to the motioning Treylon Burks on the 10-yard line, and Burks executed his flip to Hammonds on the 5. However, blitzing nickel back Mark Webb was charging untouched and already bearing down on Hammonds as he took the flip. Hammonds shrugged off Webb at the 1 while heading in the wrong direction, then Azeez Ojulari punched the ball free in the Arkansas end zone. Hammonds struggled to pick up the ball near the back of the end zone and went out of bounds with it against the swarming Bulldogs.

In the first half, the Razorbacks had trouble getting out from deep in their own end while the Bulldogs continually sputtered inside Arkansas territory.

Arkansas ran 16 of its 35 offensive plays inside its 20-yard line in the first half, while Georgia ran 29 of its 49 offensive plays from either the 50 or on the Razorbacks' side of the field.

Coach Sam Pittman said he thought the limited crowd had a substantial bearing on the atmosphere.

"Because if we had a packed stadium, I think we really would have felt it, even though I'm so proud and happy with the people we had in there," Pittman said. "They were pretty loud with the number of people we had. Certainly a home packed stadium will make a huge, huge difference.

"But I was proud of the fans that came out. They were loud. But anytime you can put 70,000 people in there, loud and raising heck, it helps you."