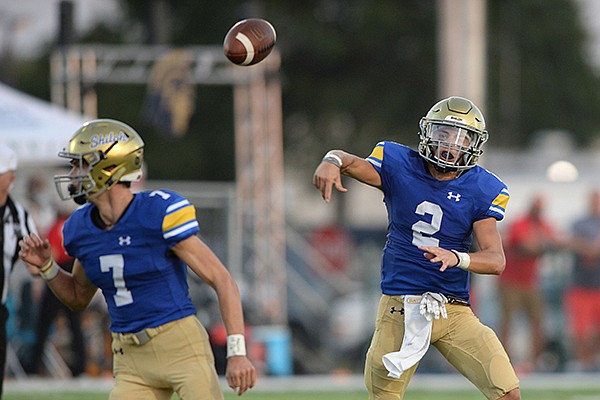 Shiloh Christian quarterback Eli Wisdom (2) passes Friday, Aug. 28, 2020, against Pea Ridge during the first half of play at Champions Stadium in Springdale.

The 2022 in-state football class is shaping up as one of the better classes in years, but the 2023 class also looks promising.

Ashdown tight end Shamar Easter, 6-5, 210 pounds, was the first to receive an offer from the Razorbacks in the 2023 class on April 6. Kansas offered him two days later, and New Mexico recently offered.

College Football Today rates Easter the No. 7 tight end in the nation in his class.

Jacksonville running back Darien Bennett, 6-0, 215, received an offer from Arkansas on May 28.

The big, fast and physical Bennett rushed 34 times for 256 yards and 2 touchdowns as a freshman at Little Rock Parkview before suffering a fractured tibia in the third game of the season.

Smackover receiver D’Kylan Hildreth is another prominent sophomore prospect. Hildreth, 6-3, 190, wasn’t able to showcase his talents at college camps over the summer due to the NCAA dead period. If he had, the two-year starter might have several Division I offers now.

His size, speed, explosiveness, body control and ball skills along with yards after the catch give him the chance to be highly recruited.

DeWitt offensive lineman Will Moss, 6-3, 295, shows nice athleticism and aggressiveness after the snap. He already owns an offer from Kansas and should see more in the future.

Wisdom, 6-0, 165, is a dual-threat signal caller who also returns kickoffs for the Saints. He had an 85-yard return for a touchdown in a 34-28 victory over Poteau, Okla., this season.

Little Rock Parkview running back Willie Eackles, 5-11, 175, received an offer from Memphis on Sept. 14. He’s the fifth Patriot from this year’s team to earn a Division I offer.

He’s rushed 13 times for 77 yards and a touchdown, and has 2 catches for 12 yards in two games. He returned a kickoff 94 yards for a touchdown in a 41-13 victory over White Hall.

Kansas and others are evaluating Malvern dual-threat quarterback Cedric Simmons.

Bentonville running back Josh Ficklin, 5-10, 195, shows an ability to bounce off would-be tacklers while also displaying an impressive burst. He has 51 carries for 338 yards and 4 touchdowns for the undefeated Tigers.

Magnolia running back Garrion Curry, 5-8, 185, has earned praise from opposing coaches this season. He rushed 15 times for 198 yards, 2 touchdowns and had a reception for a 9-yard score in the Panthers’ 52-49 victory over Little Rock Christian.

Speed, balance and his ability to plant and cut has helped him rush for 542 yards and 8 touchdowns while also returning a punt 63 yards for a score.

Stuttgart’s Jaidan Strange is one of the top sophomore athletes in the state.

Strange, 6-1, 170, plays quarterback, receiver and defensive back for the Ricebirds. Because Stuttgart has won its three games by an average score of 40-4, he’s seen limited action.

Star City’s CJ Turner, 6-2, 190, already passes the eye test, and because of his physical abilities he will get his share of looks from major colleges.

Safety or linebacker appear to be Turner’s future position in college.

Searcy Coach Kenny Simpson, who was at Southside Batesville last year, saw Turner as a freshman and called him “a physical freak.”

Searcy tight end Eli Wilson, 6-4, 255, is already a dominant blocker as a sophomore. If he continues to fill out, his future on the next level is likely on the offensive line.

Gosnell’s Floyd Williams, 6-1, 170, plays quarterback , running back and defensive back for the Pirates. He had 137 rushing yards, and 129 passing yards and 4 touchdowns in a 32-6 win over Highland on Friday.

His speed and athleticism will get him looks from colleges.

Prescott athlete Carston Poole, 6-2, 180, recently received an offer from Henderson State University and is on Arkansas’ radar. He has 16 tackles and an interception in two game while playing safety.