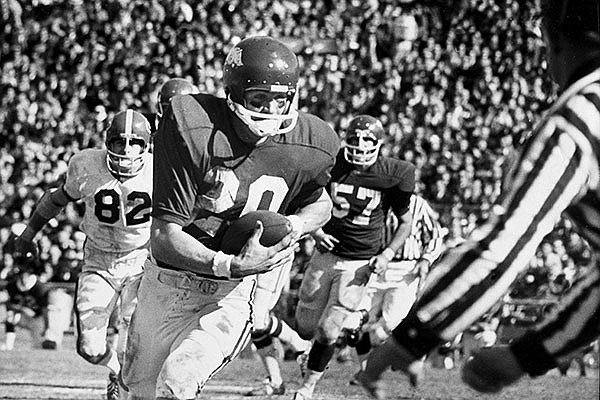 Arkansas receiver Chuck Dicus races to the end zone and a referee at right lifts his arms to signal an Arkansas touchdown in the second quarter of the Georgia-Arkansas Sugar Bowl game in New Orleans, Jan. 1, 1969. (AP Photo)

Sportswriters don’t pay admission. In some of my favorite discussions with my father, he’d tell me who he’d pay to watch play for the Arkansas football team.

Watching Bill Montgomery and Chuck Dicus throw and catch from 1968-70 was a package deal to my dad. They were ahead of most in their time. Quarterbacks Joe Ferguson and Quinn Grovey were also favorites.

Of course, there are some great ones of late like Matt Jones (2001-04) and Darren McFadden (2005-07) who would take your breath away every time they touched the ball.

The Razorbacks have one now comparable to all of those in junior wide receiver Treylon Burks. The 6-3, 223-pound Warren native has rare speed and leaping ability with matching ball skills.

Admission is free for Saturday’s scrimmage, set to begin at 10:30 a.m. at Reynolds Razorback Stadium. That No. 16 will be running routes in live work might be enough to warrant a few dollars as you come through the gates. He’s that good.

It was worth a call to Dicus, equally fun to watch during his days. Dicus set the school record with 118 catches in his three years, a record that stood for 25 years before it was broken by J.J. Meadors.

“He has a lot of talent, no question,” Dicus said. “And I think there is hidden talent that we haven’t seen yet. Not all of it has been tapped yet.

“I think that’s the challenge for his new wide receiver coach (Kenny Guiton) and the offensive coordinator (Kendal Briles). He’s only as good as the number of times they get him the ball.”

There were plenty of highlight-reel catches last year, especially against Ole Miss (11 catches, 137 yards) and Missouri (10-206). Those two games had everyone scrambling in the record books for where Burks ranked.

It made me recall the 1969 Sugar Bowl when Dicus torched Georgia free safety Jake Scott for 12 catches and 169 yards — a Sugar Bowl record. It was a case of Arkansas coaches recognizing a Georgia secondary flaw.

Scott, an All-American, would line up 12 yards deep off the slot receiver and take him man-to-man. No one in the SEC had exploited that look as the Bulldogs rolled to the league title.

“Our coaches didn’t think he could do that against us, with me in the slot,” said Dicus, who was also an All-American that season and again as a senior. “Georgia had a lot of confidence in Scott, but that is difficult 12 yards off the slot for anyone.

“I ran a lot of short, quick routes. That’s why my yardage wasn’t so great.”

The only touchdown in the game came on a spectacular 27-yard catch by Dicus. A still photographer snapped his camera at the instant the ball arrived. It’s one of the most talked about catches of his career.

“I caught the back of the ball,” Dicus said. “I joke that catching one like that is a skill and that we practiced it. We did, but it was absolutely the luckiest catch I ever made.”

Dicus marvels at the way modern receivers snag catches with one hand. Burks made a fabulous one-hand grab for a key touchdown against Ole Miss in the corner of the end zone with a toe just short of the sideline.

“My first coach at Arkansas was Richard Williamson,” Dicus said. “He would tear your head off for trying to catch it with one hand. But (Pro Football Hall of Fame receiver) Raymond Berry was my coach as a senior and we practiced one-hand catches every day.”

It wasn’t easy in those days to one hand the football.

“We didn’t have gloves,” Dicus said. “We did put stickum on our hands.

“I’ve never seen or put on the gloves they have today. I think with those, it might be hard to drop anything.”

Burks has sure hands and comes up big in key spots.

Burks will be utilized in many ways next season. He’s likely to be more than a slot receiver, his primary spot his first two seasons. Asked about that possibility this week, Burks declined to elaborate.

“Coach Briles tells me not to talk about that,” Burks said.

Fine on declining to reveal a strategy change, but that’s a sure clue that he’s going to be on the move. One certainty, no one is going to line up 12 yards off of Burks – now quicker after losing 10 pounds over the winter — the way Georgia did against Dicus.

“No, I don’t think so,” Dicus said. “I am looking forward to watching him play.”

Catching up with Dicus provided some time to discuss the story on how he made it from Garland, Texas, to Fayetteville. A high school quarterback, Dicus grew up a Razorback fan dating to a three-year period when his father, Herman, coached high school football at Texas High School in Texarkana.

“George McKinney was from Texarkana,” Dicus said. “We lived there when I was probably just beginning elementary school. George was like a second son to my father and we spent a lot of time together.

McKinney, who died Feb. 15, was a key player for the Hogs in 1959-61 when the Hogs won or shared three Southwest Conference titles. He played quarterback and safety, and was a team captain in 1961.

“Those who played with him always were aware that George just never made a mistake. His ability to play key positions flawlessly was a big part of why those teams won so much.”

McKinney played the role KJ Jefferson assumes this season. McKinney was tasked with getting the ball to Alworth.

Fans can watch Saturday if Jefferson can get the ball to Burks.