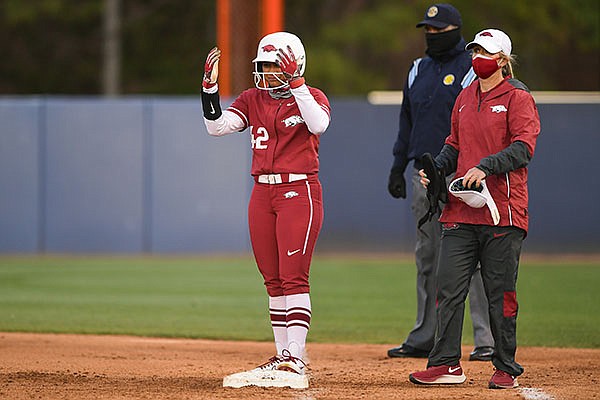 Arkansas' Sam Torres (42) reacts after recording a hit during a game against Auburn on Friday, April 1, 2021, in Auburn. Ala. (Photo courtesy Shanna Lockwood, AU Athletics via SEC Pool)

Center fielder Sam Torres had two of No. 11 Arkansas’ five hits Thursday, and pitcher Mary Haff earned her 18th victory of the season as the Razorbacks defeated the No. 25 Auburn Tigers 6-1 in Auburn, Ala.

The game was scoreless through the first three innings, but the University of Arkansas (29-3, 10-0 SEC) got things going in the fourth. Danielle Gibson reached on a fielder’s choice and advanced to second when Kayla Green drew a full-count walk. Gibson scored on Aly Manzo’s RBI single to center field, and Green scored on a throwing error by Auburn catcher Abby Tissier after a passed ball for a 2-0 lead.

The Razorbacks added to their lead in the fifth inning. Nicole Duncan was hit by a 3-1 pitch, advanced to second on a Torres single up the middle and scored on Hannah McEwen’s single to center field. Braxton Burnside followed that with a three-run home run — her 18th of the season, which set a single-season school record — to push the lead to 6-0.

Auburn (19-9, 1-6) got its only run came in the bottom of the seventh on Alyssa Rivera’s single that scored Makayla Packer, who walked to start the inning. Packer and Tyler King accounted for the Tigers’ other two hits.

The Razorbacks, who are the only undefeated team in SEC play and haven’t lost since March 16 to Liberty, will face the Tigers at noon Central today and 1 p.m. on Saturday. Both games will be televised on SEC Network.