What to expect from Pitt transfer Au’Diese Toney 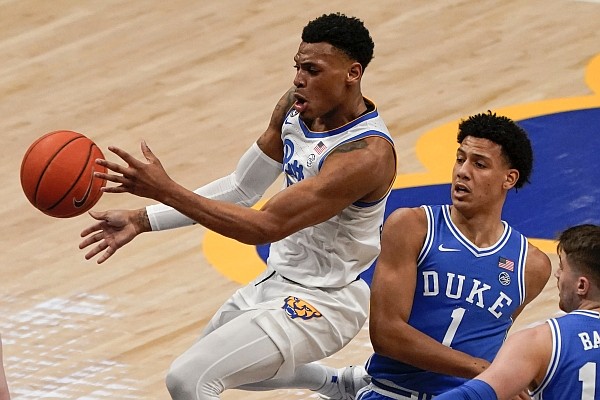 Pittsburgh's Au'diese Toney (5) passes after getting by Duke's Jalen Johnson (1) during the first half of an NCAA college basketball game, Tuesday, Jan. 19, 2021, in Pittsburgh. (AP Photo/Keith Srakocic)

FAYETTEVILLE — Arkansas coach Eric Musselman was scheduled to speak to reporters at 1:45 p.m. on Thursday to put a bow on the Razorbacks’ 2020-21 season, which ended in the Elite Eight on Monday.

Musselman, who wrapped up his second season at Arkansas this week, was running a few minutes behind. Roughly 10 minutes into his Zoom press conference, it became clear why.

The Razorbacks’ staff had committed Pittsburgh guard Au’Diese Toney, a 6-6, 210-pound small forward who averaged 14.4 points on 46.4% shooting and 5.9 rebounds per game last season for the Panthers. Each of those numbers was a career best for Toney, who grew up in Huntsville, Ala.

Over three years at Pittsburgh, he averaged 9.7 points on 42.6% shooting and 5.4 rebounds in better than 29 minutes per game. Musselman couldn’t contain his excitement.

“He’s what I would consider a position-less basketball player,” he said. “And if you look historically, whether it was at Nevada or here, those position-less players that can play five positions are so, so valuable. That’s what we think we’re getting with Au’Diese.

“I’m ecstatic. We’ve been recruiting him throughout the entire NCAA Tournament run. It’s been great to get to know he and his mom and dad.”

To learn more about Toney’s game, we reached out to Craig Meyer, a Pittsburgh basketball beat writer for the Pittsburgh Post-Gazette who covered him up close.

Asked about Toney’s strengths, Meyer dove directly into his versatility and ability to guard multiple positions. And, like Musselman, he lauded Toney’s play in the open floor.

“He fights through screens well and did a lot to mask Pitt's defensive problems elsewhere,” Meyer said. “It's not really a surprise that Pitt's defensive woes became that much more obvious after he left the team. Had he played the entire season and not been left off of the all-conference ballot, I would have had no hesitation voting him to the all-defensive team in the ACC.”

Though not much of a shot blocker, Toney recorded at least one steal in 13 of 16 games played in 2020-21. The previous season, he ranked in the top 20 in the ACC in steal percentage (2.5%), according to KenPom data.

Pittsburgh’s defense allowed 0.97 points per possession over Toney’s 953 defensive trips last season, according to HoopLens analytics, and the Panthers were plus-4.9 points per 100 possessions with him in the lineup. Meyer added that Toney is a “tough and tenacious” player who can successfully rebound and fight against bigger bodies on the interior.

“I always looked at him as someone who played bigger and tougher than his 6-foot-6 frame,” Meyer said. “I’ve only been on the beat a few years, but having watched some of these teams growing up, he reminded me of some of the more important players from Pitt's most successful years as a program — tough-minded guys who were defensively excellent and who would lead you to believe they were 20 pounds heavier or 2 inches taller based on their ability to handle physicality and, for lack of a better phrase, get shit done.

“I think that could ultimately aid a program like Arkansas right now more than it can somewhere like Pitt, which is still struggling to escape the bottom third of the ACC standings.”

Offensively, Toney has put together several big games against high-quality competition. His highest scoring output the last two seasons have come against Duke. As a sophomore he added 27 points and 4 rebounds vs. a Blue Devils team ranked No. 2 on KenPom at the time, and last season he had a 22-point, 11-rebound double-double.

Consider these other notable performances in his ACC career:

Additionally, Musselman is a fan of high free-throw attempt players. Toney appears to be one. According to KenPom, he posted the No. 4 free throw rate in the ACC last season and drew 4.1 fouls per 40 minutes played in the league.

Toney also grabbed 7.2% of available offensive rebounds in 2020-21, per KenPom, which was good enough to earn a national rank. And he was even better as a freshman (8.4%).

While Toney improved offensively in his time at Pittsburgh, Meyer cautioned that he is not necessarily a player a team may rely on as a shooter. He is a 30.2% career three-point shooter, though not infatuated with the shot. His season high for made threes is 22 as a sophomore. Toney is a 66.2% free throw shooter as well.

“There were times when he seemed frustrated with his role in Pitt's offense, though I think part of that had to do with disappointment over the team losing and him feeling like he could help them out,” Meyer said. “On a more successful team like Arkansas, I could easily see him buying into more of a secondary or tertiary role.

“It would be beneficial for both him and the team. While he's an athletic player who is a good scorer from inside the arc, he's best as a complementary scorer, not the centerpiece of a team's offense.”

As a teammate, Toney was a player who Pittsburgh coach Jeff Capel trusted most as a leader with a young roster last season. After an 84-58 loss to Notre Dame on Jan. 30, Toney and a couple of teammates rallied the team and hashed out the its issues, Meyer said.

Days later, the Panthers knocked off a ranked Virginia Tech team that was previously 7-2 in conference play. Toney finished with 14 points, 6 rebounds and 3 assists.

“I think some of his leadership abilities got unfairly marred a bit when he decided to transfer late in the season,” Meyer added. “He's a nice guy who will be a constructive piece inside the locker room.”