Pittman: Accuracy of QBs 'just not there right now' 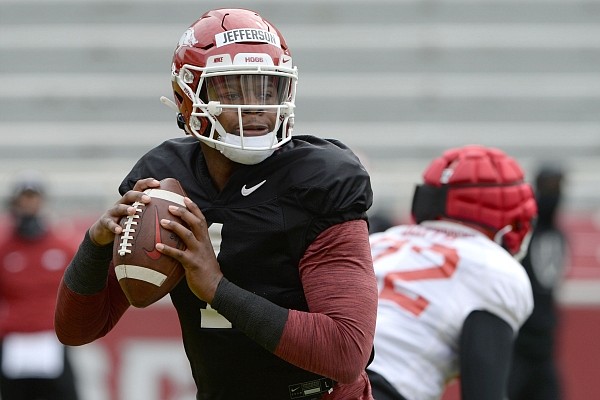 Arkansas quarterback KJ Jefferson looks to pass Saturday, April 3, 2021, during a scrimmage at Razorback Stadium in Fayetteville. Visit nwaonline.com/210404Daily/ for this photo gallery.

FAYETTEVILLE — Arkansas coach Sam Pittman feels confident that his quarterbacks will be fine this fall, but he is a bit mystified by the lack of touch and accuracy on passes this spring.

During Saturday’s second scrimmage, first-team signal caller KJ Jefferson and backup Malik Hornsby combined to go just 22 of 41 for 205 yards with a touchdown, an interception and three other interceptable throws dropped by the defense.

While Jefferson’s body language and communication were good, according to Pittman, but neither he or Hornsby were sharp overall in the scrimmage.

“I think he is doing a better job with all that, with communication,” Pittman said of Jefferson. “We have just got to play catch, you know, and we are not doing it right now. They can because I see them every day at practice and they can. That is just why you have to get under the lights a little bit more and put a little bit more pressure on and help them rise to the top.”

Jefferson, whose 75-yard touchdown pass to Mike Woods early on was wiped out due to a penalty, did hit 10 of 11 attempts at one point – all on short throws - but finished by connecting on just three of his final 10 throws.

Hornsby started 1 of 9 with one interception and another ball that should he been picked off.

“We have got to get better and the great thing is we have rally good kids that work hard so I am not concerned about it. I just thought we would be a little bit further ahead than what we are right now.”

Pittman gave the defense some credit, but was anxious to see film of the scrimmage for a deeper dive into the miscues.

“I don’t know without watching the tape,” Pittman said. “Just sitting out there behind the quarterbacks today, I don’t know if our defense was doing a nice job of stopping the short routes or if our quarterbacks are looking for the deep ball. Are they going through the progressions correctly?

“Obviously something is wrong. It’s either we’re not getting open, we’re not reading the first progression and hitting him when he’s open. Maybe we’re trying to go deep with the ball. I don’t know the answer to that until I watch the tape. But obviously our timing’s off.”

Jefferson did hit Mike Woods with a long touchdown pass early in the scrimmage.

Pittman did see some improvement from true freshman Lucas Coley, an early enrollee who was 4-of-6 passing for 72 yards and a touchdown.

Veteran John Stephen Jones was 7 of 9 passing for 81 yards with a touchdown and an interceptable pass while Ole Miss transfer walk on Kade Renfro was 1 of 5 for 12 yards.

“I think (Coley) did (improve),” Pittman said. “I think he improved from last week. I think he’s getting a little more confident.

“Overall, the accuracy of our quarterbacks isn’t very good at all right now, and we certainly have to be able to throw and catch it. But I thought he got better.”

Arkansas took a week off for spring break, returned to practice Saturday and wasn’t sharp, something Pittman said he understood, but was not going to tolerate.

“The defense seemed to win most of the situations,” Pittman said. “We were on a discretionary week, a spring break week and came back and practiced on Thursday, so we were basically off from the practice field for eight days and I felt like it showed on our offense, with the accuracy of throws and hanging onto the ball, jumping offsides.

“We didn’t play very smart football today on the offensive side of the ball. But some of that, I expected it. We certainly aren’t sitting here going we’re happy that it happened. But there are some reasons behind some of the situations that happened today.”

Pittman noted several of his players got coronavirus vaccine shots this week.

“The other thing, too, is we had 40-something kids take the vaccine this week as well,” Pittman said. “It certainly could have done something with their energy. I don’t know that.

Arkansas, which has six of its 15 spring practices remaining, will return to workouts Tuesday and also practice Thursday and Saturday.

Pittman is not planning to have another scrimmage until the Red-White spring game on April 17.

“Saturday will be just a regular practice for us,” Pittman said. “I don’t know exactly. I’m trying to make up my mind, whether I want to … we’ll go regular next week. We won’t tackle live next Saturday. It’ll be a shells practice.

The Red-White game will probably be a mix of first- and second-team players.

"We’ve talked about it as a staff,” Pittman said. “Probably the first thing off our conversation is probably put the one "D" and two "O" together and put the two "D" and one "O" together and then piece the rest of the guys in on the teams that way.

“If we did that, we would probably do that the Thursday before the spring game and kind of have that practice formatted that way as well."