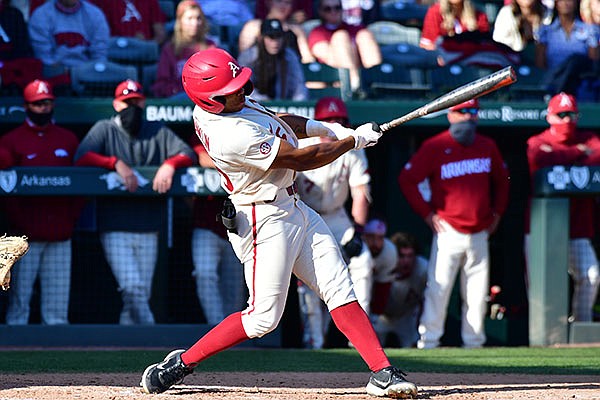 Arkansas center fielder Christian Franklin bats during a game against Auburn on Saturday, April 3, 2021, in Fayetteville.

It was fitting attire for the player who had just knocked out the Auburn Tigers.

Zack Gregory doubled down the right-field line with one out in the 10th to set up the game-winning score. Auburn elected to walk Arkansas leadoff hitter Robert Moore to pitch to Franklin, who had hit into three double plays during the series, including inning-ending double plays in the third and seventh innings Saturday.

Franklin pulled a 1-0 off-speed pitch past Auburn third baseman Rankin Woley. He said it was the first game-winning hit in his life.

“Somebody made a crazy play on me about four or five times,” Franklin said, “so I knew I was feeling good at the plate and I knew that I was going to put the bat on the ball. After they walked him I just stayed ready and told myself get a good pitch to hit and take a good swing.”

Franklin was put in position to win the game due to a pregame decision from Arkansas coach Dave Van Horn. The coach moved Franklin — who typically hits fifth in the order — to the two hole.

“I like to have a guy in the two hole who’s hot or a really big-time threat,” Van Horn said prior to the game on the Razorback Sports Network. “Christian’s hot right now. It doesn’t matter if it’s a right- or left-handed pitcher, he’s getting good at-bats, and that’s what I’ve seen the last couple of days.”

After the game, Van Horn said he thought Franklin was swinging the bat well despite a 2 for 7 start in the first two games against the Tigers. Several of his swings had been hard, but weren't hits due to great fielding by the Tigers.

“I just felt like maybe moving him up in the order a little bit would change his luck,” Van Horn said.

If not for the double plays — two of four turned by Auburn's slick middle infield tandem of second baseman Brody Moore and shortstop Ryan Bliss in the series finale — Franklin might have reached base in every at-bat but one Saturday. He was hit by a pitch in his first plate appearance and walked as part of a two-run sixth.

“I was having good at-bats,” Franklin said. “I felt good going into that at-bat and I knew I was going to hit the ball hard.”

He felt confident against Auburn pitcher Trace Bright, who he doubled against to lead off the Razorbacks' seventh inning rally Friday. The Tigers (12-13, 1-8) recycled three pitchers who Arkansas had seen earlier in the series, and those pitchers gave up four runs over the final 4 1/3 innings in the finale.

Franklin began the season batting second in the lineup, but was dropped down in the order after a rough start.

He had pockets of success, but really began to hit well consistently last week after switching back to a batting stance he used for most of his freshman season in 2019. Franklin had trouble hitting fastballs until he implemented a toe tap just before the College World Series that year, but he and hitting coach Nate Thompson felt it might be time to go back to a leg kick after his slow start to this season.

“I was watching stuff this spring and I just felt like it was out of sorts…he was swinging and missing at pitches and he was getting beat by pitches that he shouldn’t,” Thompson said earlier this week. “We tried a couple of different drills and I told him, ‘Look, I think the toe tap was really good for a portion of your career, but I think the toe tap is now going to hold you back from going forward.’

“I just felt like he was getting out front and it was causing him to run his front side into the baseball.”

Since the change, Franklin has five multi-hit games and 9 RBI. He hit three home runs last week at Mississippi State, including a go-ahead three-run homer in the second game of the series.

“The kid is the hardest worker I’ve ever had the pleasure of working with,” Thompson said. “He’s very smart and always has been willing to do what it takes.

“It’s all about him turning behind the baseball instead of jumping at the ball.”

That's what he did in the 10th inning Saturday.

“To do it on that stage and in that situation for my team felt really good,” Franklin said.