Pittman allows fans to see what players can do 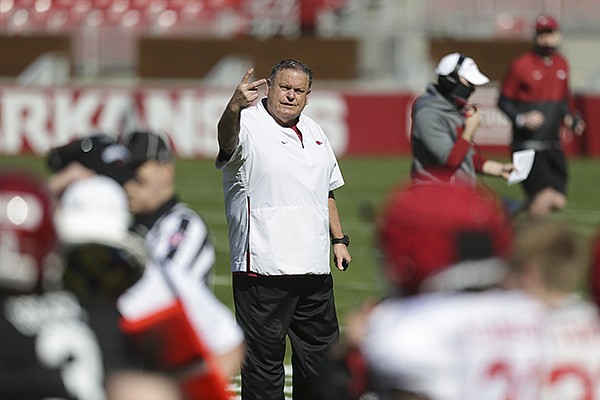 Arkansas coach Sam Pittman is shown prior to a scrimmage Saturday, March 20, 2021, in Fayetteville.

FAYETTEVILLE — The Arkansas Razorbacks will get to show out for their fans for the second time this spring in today’s scrimmage at Reynolds Razorback Stadium.

Gate 1 and the west side stands will be open to fans starting at 10:30 a.m. as the University of Arkansas conducts spring practice No. 9 at the stadium.

Coach Sam Pittman, in his first set of spring drills as the second-year coach, said this second open scrimmage serves a two-fold purpose, not the least of which is putting the team’s quarterbacks under more scrutiny.

“We’re trying to find a guy that can go play well in a team setting,” Pittman told SEC Network host Paul Finebaum this week. “And to be honest with you, part of the reason why we’ve opened our scrimmages up is because I want our quarterbacks to feel a little bit more pressure.

“I think they’ll feel that a little bit more with fans in the stands. That’s a big part of why we’re doing it. The other reason is because we want the folks of our state to be able to see us play.”

Razorback players, who prepared for the 2020 season in closed scrimmages in the fall after spring drills were called off due to the virus pandemic, are happy to have fans in the stands.

“Honestly I feel like to us having the fans there … puts a little more on edge to go do what we’re coached to do,” junior receiver Treylon Burks said. “I feel like it’s good for us knowing we’ve got fans that come out and support us while we’re just practicing. So you know it’s always good to have those.”

Defensive tackle Isaiah Nichols, a Springdale High graduate, rehabbed a minor injury on the sideline for the last open scrimmage March 20 and saw the fans piling in that day.

“I was working out on the side and seeing how many fans were coming in,” he said. “It means a lot. These past couple of years, we’ve been through a lot. Last year was a rough year with covid and everything going on, and so to see the support that the fans still have just for a scrimmage that they said, ‘Hey, come to the scrimmage.’ We had a pretty good turnout.

“And I think it really means a lot to us as a team, especially me personally being from Arkansas seeing that we still have that Arkansas fan base, people still supporting us. Because we’re working hard, and we can do right by them.”

The Razorbacks, coming off a 3-7 season against SEC-only competition, ran about 120 plays, plus a selection of special teams work in their previous scrimmage.

First-team quarterback KJ Jefferson threw touchdown passes of 20 yards to Burks and 18 yards to tight end Blake Kern in the first scrimmage, but he also was picked off early by safety Malik Chavis and was touch sacked a few times, sometimes due to holding the ball too long.

Jefferson and Malik Hornsby have been the signal callers for the first two units on offense, and they’ve seen a rise in the play-making talent around them.

“What I learned quickly was that we brought in a lot of weapons on the outside, as far as the receiver position,” Jefferson said. “We also have a lot [more] depth than we had last year.

“Now we’re running a lot more playmakers at receiver and we can get the ball in space and make a move. I feel like that’s the biggest asset that we have so far, just the receiver depth and having weapons outside that I can get the ball to.”

Pittman wants the Razorbacks to feel the fans’ presence to hopefully enhance their focus and get used to performing on the big stage.

“Some guys play better with people in the stands and some guys play worse,” he said on the SEC Network. “We have to find that out this spring. Obviously a guy can have a good day or a bad day.

“KJ Jefferson at the quarterback spot has proven that he can play SEC football and play it well with his one start that he had against Missouri last year. So we know that, but we’re trying to put them in as difficult of situations as we can.

“We ran the ball well in our last scrimmage, and didn’t protect it quite as well, held the ball quite a bit, a little longer than what we’d like to. The defense won the third-down situations handily, so those are some things we need to continue to work on.”

Burks, a Warren High graduate who broke out with 51 catches, 820 yards and 7 touchdowns last year, said the Razorbacks had a strong practice in helmets and shorts Thursday.

“I felt like this was one of the best practices we’ve had since spring ball started,” Burks said. “We came out and executed. The defense pushed us. The offense pushed the defense. We went out and competed with each other and got each other better.”