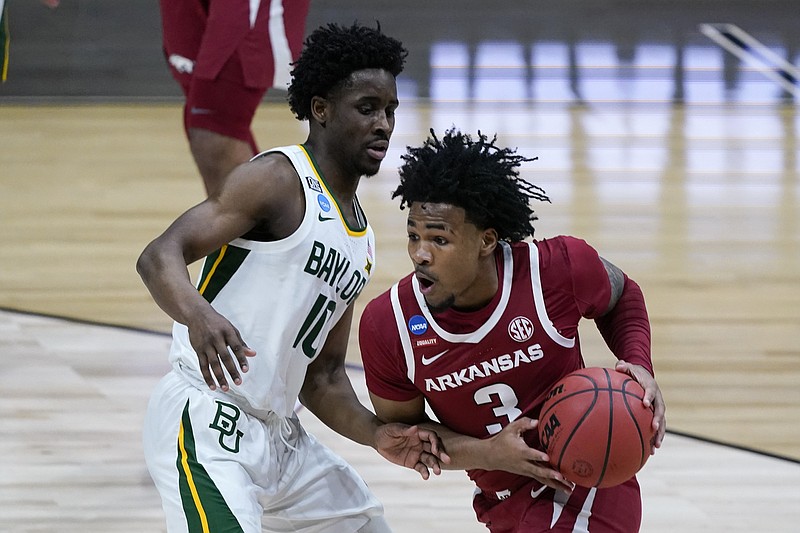 FAYETTEVILLE — Of those head coaching the 350 men’s NCAA Division I basketball teams, Arkansas’ Eric Musselman should be among the least complaining about the transfer portal.

So he doesn’t. Even upon losing one striking closest to home.

At Arkansas it seemed Desi Sills lived a dream. The Jonesboro native said he was doing so even before playing his first game as a freshman guard for former Arkansas Coach Mike Anderson’s 2018-19 Razorbacks.

“I’m here for the Razorbacks,” Sills said before that season commenced. “I always wanted to be a Razorback since I was a little boy. Now I’m here and I’m living a dream.”

He lived it playing every game for Anderson’s 18-16 Razorbacks and the 20-12 and 25-7 Razorbacks for Musselman's first two teams.

Anderson recruited him to be “a defensive dog,” Sills said.

He said Musselman expanded his offensive game, starting him 24 times in 2019-20, upping his minutes from 576 to 997 and sticking with him through an early three-point shooting slump and being rewarded. Sills’ points upped from 179 to 340.

This season Sills started hot until hurting his shoulder. That injury and the coinciding emergence of freshman guard Davonte “Devo” Davis reduced Sills back to off the bench.

Through it all Sills encouraged Davis even while supplanted for which Davis expresses forever gratitude.

“I’m always going to support Desi,” said Davis, who added Sills always was his go-to for advice. “We will always be close friends and that will never change.”

Off the bench Sills’ 4 assists, 6 rebounds and 2 steals were instrumental in eking Arkansas, 72-70 past Oral Roberts into the Elite Eight game against Baylor, with Sills again registering 6 rebounds and 4 assists.

A dream end to a dream team season yet Sills now dreams starting anew as a starter elsewhere.

“Desi had two great years while we’ve been here, and obviously with Coach Anderson,” Musselman said. “Big part of our culture and helped build it, and had a lot of different roles for us. We wish him nothing but the best.”

Given what Musselman derived this season from dream season graduate transfer starters Justin Smith via Indiana, Jalen Tate via Northern Kentucky and SEC sixth-man of the year transfer JD Notae via Jacksonville — and what they’ve derived from — he’s not begrudging anyone changing dreams by changing scenes.

Some do. Sticking through what you started understandably is long ingrained into the moral fiber of many.

But so is the pursuit of happiness and the college age desire to experience and experiment.

It’s easy to lament itchy feet moving on yet forget some of Arkansas’ deepest rooted Razorbacks are transplants.