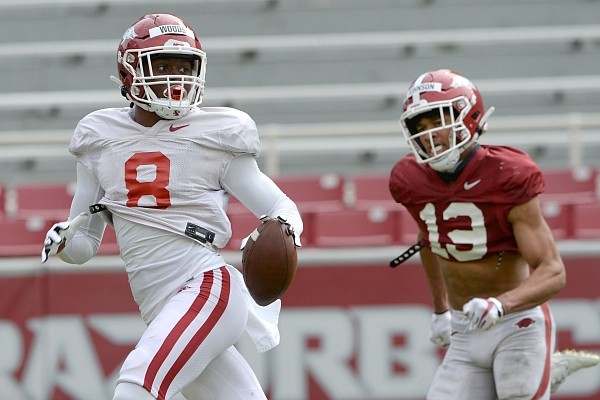 Arkansas receiver Mike Woods (8) makes a catch Saturday, April 3, 2021, ahead of defensive back Khari Johnson during a scrimmage at Razorback Stadium in Fayetteville. Visit nwaonline.com/210404Daily/ for the photo gallery.

Takeaways: Sam Pittman mentioned following the scrimmage that the accuracy of his quarterbacks has to improve. Jefferson's first pass of the day was interceptable, then he hit 10 of his next 11 throws. He did not complete a pass for more than 10 yards, and he threw a touchdown pass to Treylon Burks in the end zone. Jefferson lobbed one up for Burks and he came down with it despite tight coverage from Simeon Blair.

Hornsby was shaky to start the day. He began 1 of 9 with an interception and another interceptable pass to go with a throwaway. He did, though, complete one of the longer passes of the day to Hudson Henry for 33 yards. They hooked up again for 16 yards just before. He hit John David White for 17 yards as well. Hornsby ran the ball well, finishing with 55 yards, including 25 on his first carry. Quarterbacks were not allowed to be tackled, so plays were blown dead when a defender came near them. In the pocket, the game looked to be moving a little bit fast for him at times.

Coley's touchdown pass went to Zach Lee, a redshirt freshman tight end from Bentonville High. Lee did most of the work on the 16-yard score. He went into the end zone untouched. Darin Turner also caught a jump ball for 30 yards from Coley. He bounced back well after his first pass went for minus-1 yard and his second attempt fell incomplete. Pittman said he thought Coley showed good improvement from the first scrimmage to today.

Jones completed five passes for 10-plus yards, including a 23-yarder to Kendall Catalon and 21-yarder to Harper Cole. He rushed one time for two yards.

Takeaways: Hammonds made the biggest play of the scrimmage on his second carry. After a 2-yard gain to start a series, he took the second handoff, got the edge on the far sideline and went 73 yards for a score. Sanders and Johnson got plenty of work, finishing with nine carries apiece. Johnson ran hard on his final two carries, totaling 21 yards and a score in the red zone work. Sanders also had a touchdown run – 18 yards – in the red zone.

It was a nice bounce back late in the day for Sanders, who started the scrimmage with minus-4 yards on his first three touches. Oglesby ran the ball hard with the first-team offense. He ripped off a 23-yard run on his first carry of the day. Smith did not get a lot of work, but he did have 4 runs of at least 3 yards, including 1 for 7 and another for 6.

Coley made a nice play with his feet to gain 14 yards. Burks was stopped behind the line for a loss of three yards on his only carry.

Takeaways: Woods saw what would have been a 75-yard touchdown pass from Jefferson wiped away because of a penalty. That was Jefferson's best throw of the day. Gardiner led the receivers with five catches for the scrimmage, including a 13-yard grab early on. Henry had a pair of big gains totaling 49 yards, and he also caught an 8-yard pass. Turner's 30-yard catch was one of the best we saw, and Crawford hauled in a 17-yard pass from Hornsby.

Takeaways: It was a pretty solid day all around for the secondary. Arkansas' first-team defense, especially in the back end, was on point most of the scrimmage. Blair's interception of Hornsby came after Jaedon Wilson tipped a pass that was behind him. Blair laid out for the ball and reeled it in. Pittman said afterward that Blair is playing with great confidence. Brooks tallied a tackle for a loss of two yards.

Gerald had a big day going against mostly second- and third-team offensive linemen. He blew up a play and dropped Oglesby for a loss of five yards early on. Gerald got in the backfield to Hornsby at least twice for sacks. Gregory's sack went for a loss of nine yards, and Deon Edwards, the senior linebacker, made several plays – sack of Jones, TFL on Hornsby and a PBU.

Stewart, who had been running with the first team in practice this week, was with the top unit Saturday. Pittman said he is a hard-working kid who has earned his time with the first defensive line. He recovered a fumble.