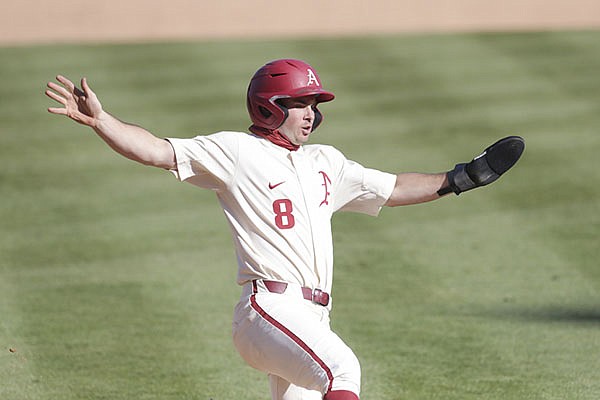 Arkansas pinch runner Braydon Webb scores the game-tying run during the ninth inning of a game against Auburn on Saturday, April 3, 2021, in Fayetteville.

On Friday, pinch hitters Zack Gregory and Cullen Smith were key to the Razorbacks' five-run seventh inning. Gregory had an RBI triple and scored on a sacrifice fly by Smith.

In the eighth inning, Gregory walked to load the bases and Smith drew the wild pitch that allowed the Razorbacks' to score the game-winning run in a 6-5 victory.

Jacob Nesbit came into Saturday's game as a defensive replacement at third base after Charlie Welch struck out in a pinch-hit at-bat. Nesbit drew the first of three two-out walks in the eighth inning that forced home a run and pulled the Razorbacks within 5-4.

As a pinch runner for designated hitter Matt Goodheart, Braydon Webb went first to third on a single by Cayden Wallace and scored on a sacrifice fly by Brady Slavens in the ninth inning to tie the game 5-5.

"I made the comment to the team after the game it was a great team win," Arkansas coach Dave Van Horn said. "We used a lot of players, pinch hitters came through — just everybody chipped in, and basically the same again today. Even putting Webb in to run, no hesitation getting to third base. It keeps everybody involved and interested and I just appreciate the effort."

Christian Franklin, who hit the game-winning single in the 10th inning, said the depth of the team reminds him of the Razorbacks' College World Series team in 2019.

"Everybody can contribute in any situation and I think we do a great job of everybody being locked in throughout the whole game," Franklin said. "Those pinch hitters come in and they’re able to get those hits and have good at-bats and stay locked in. We do a really good job with that."

Arkansas is 7 for 14 in pinch-hit opportunities this season.

The Razorbacks also won the battle of the bullpens against Auburn.

Kevin Kopps was the Razorbacks' top reliever. Kopps pitched five scoreless innings over three appearances. He struck out 11 and gave up 2 hits and 1 walk.

Arkansas had hit into 12 double plays in 23 games prior to its series against Auburn.

The Razorbacks bounced into seven double plays in three games against the Tigers, including four during the series finale.

Auburn second baseman Brody Moore began five of the double plays in the series and was a part of all seven. He turned a pair of 4-3 double plays during the Tigers' series-opening victory Thursday, and he and shortstop Ryan Bliss teamed for five over the final two games.

"Those two guys played outstanding," Van Horn said. "Not only did they hit, but they turned four double plays today. Some of them were routine, but a couple of the balls were just smoked over to the shortstop and he made tremendous plays. They did a great job all three games. They're a dangerous team....They're a lot better than their record and they're going to do some damage from here on out I would expect."

The middle infielders and center fielder Kason Howell combined to take away several hits and run-scoring opportunities for the Razorbacks throughout the series.

“Our defense has been about as good as I have been a part of — probably the best defensive effort....as we’ve had here," Auburn coach Butch Thompson said. "They just keep us in ballgames.”

Arkansas won its 11th consecutive series of three games or longer at Baum-Walker Stadium, six of which have been against SEC opponents.

The Razorbacks' last home series loss came in March 2019 when Ole Miss won two of three games. That was Arkansas' only series loss at home since the beginning of the 2018 season.

Arkansas has won 24 of 25 best-of-three or best-of-four series at home since 2018, including super regionals against South Carolina in 2018 and Ole Miss in 2019.

Counting the super regionals, the Razorbacks have won 16 of their last 19 SEC series at home.

In addition to Auburn, the Razorbacks won the final two games of their series against Alabama two weeks ago after losing the series opener.