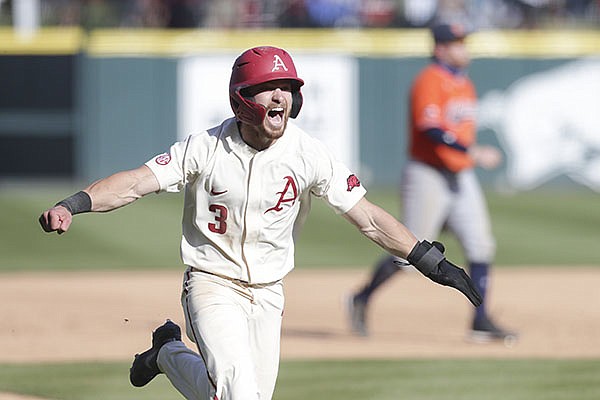 Arkansas left fielder Zack Gregory runs toward home to plate to score the winning run during a game against Auburn on Saturday, April 3, 2021, in Fayetteville.

FAYETTEVILLE — Auburn Coach Butch Thompson intentionally walked Robert Moore with one out in the bottom of the 10th inning and the winning run on second base, hoping Christian Franklin would hit into his third double play of the game.

“I knew exactly what they were doing,” said Franklin, the University of Arkansas center fielder. “Honestly, I expected them to put [Moore] on in that situation because there was only one out.

“But once I got to the plate, all those thoughts kind of cleared my mind. I was just trying to square the ball up and put a good swing on it.”

Franklin squared up a 1-0 pitch from Trace Bright and hit a single into left field, scoring Zack Gregory — who had doubled — to lift the No. 2 Razorbacks to a 6-5 victory Saturday over the Tigers before an announced crowd of 6,585 at Baum-Walker Stadium.

“It felt great,” said Franklin, a junior from Overland Park, Kan. “That’s my first walk-off since I’ve been playing baseball. To do it on that stage and in that situation for my team felt really good.”

Razorbacks Coach Dave Van Horn said he was glad when Auburn walked Moore to face Franklin, who was 2 for 10 in the series going into his last at-bat.

“I was excited about it, honestly,” Van Horn said. “I felt like Christian Franklin had hit six balls right on the nose [that were outs] this weekend.

“I mean, he just kept hitting balls hard, and he wasn’t getting a break. Sometimes just the law of averages catches up. I felt like if anybody deserved to get a hit, it was Christian. I’m happy for him.”

Franklin said Bright threw him either a cutter or a slider.

“I knew I was swinging the bat good. I was having good at-bats,” Franklin said. “I felt good going into that at-bat, and I knew I was going to hit the ball hard.

“That third baseman [Rankin Woley] almost snagged it. My heart stopped for a second, but I saw it got by and that was pure excitement and happiness for my team.”

The Razorbacks (22-4, 7-2 SEC) won their seventh game when trailing after seven innings or later.

Auburn (12-13, 1-8) took a 5-0 lead on Tyler Miller’s three-run home run with two outs in the sixth inning on the first pitch from reliever Caden Monke. The Tigers went ahead 2-0 in the first inning on Judd Ward’s two-run home run off starter Lael Lockhart.

“I just think our guys believe that we can score runs in bunches, and if we can keep it fairly close we’ve still got a shot to win,” Van Horn said. “We can put together a couple runs here and there and maybe hit a big home run or something.

“We’ve done it a lot this year. It’s been fun being in the dugout with these guys when they’re fighting like they’ve been fighting.”

Arkansas cut Auburn’s lead to 5-2 in the sixth inning on RBI singles by Matt Goodheart and Cayden Wallace, then made it 5-4 in the eighth when a run scored on a double play grounder by Casey Opitz and a bases-loaded walk to Gregory.

The Razorbacks tied it 5-5 in the ninth when Goodheart singled and was replaced by pinch runner Braydon Webb, Wallace singled, and Webb scored on a sacrifice fly by Brady Slavens.

“The amount of times we’ve been able to come back and win gives us a lot of confidence,” Franklin said. “Even if we’re down 5-0, it doesn’t matter. We know what our offense is capable of. If we get the right pitches and do what we need to do, we’re never out of any game.”

The Razorbacks left 13 runners on base, but benefited by drawing 12 walks and twice being hit by pitches.

“They kind of came at us four different times there,” Thompson said of the Razorbacks scoring in four of the last five innings. “At the end of the day, it’s the 12 walks. We created the offense for them.

“We kept opening the door and they kept getting one or two [runs], and drew us all the way back in.”

The Tigers were held scoreless the final four innings by Arkansas relievers Ryan Costeiu, who pitched two innings; and Kevin Kopps and Jaxon Wiggins, who each threw one inning.

Kopps pitched in all three games of the series and combined for five scoreless innings.

“That was an incredible effort, and he backed it up with really good performances,” Van Horn said. “To me, he’s worthy of an SEC pitcher of the week type award. He’s our MVP of the weekend, I’ll tell you that.”

Auburn won Thursday night’s opener 2-1 and looked to be in good shape to clinch the series before Arkansas rallied for a 6-5 victory on Friday night after trailing 4-0 going into the bottom of the seventh inning.

The Razorbacks, who swept Mississippi State last weekend, also dropped their opener against Alabama and came back to take the series with two victories.

“I think it shows that we have a lot of heart and we’re never just going to roll over and let a team come in here and just win a series based off one game,” Franklin said. “We do a great job of being able to bounce back and show that we can handle adversity.”