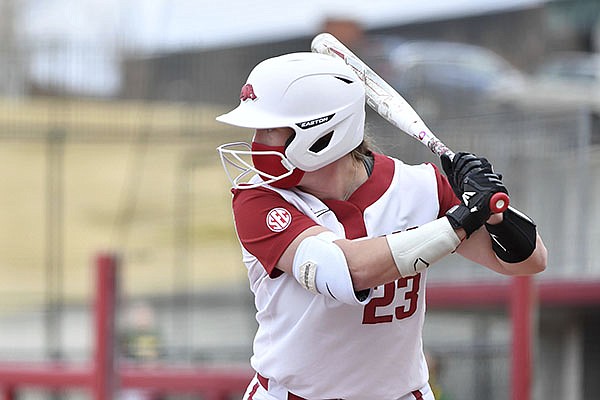 Leadoff batter Hannah McEwen had two hits and drove in a run as the University of Arkansas defeated Auburn 2-0 on Saturday afternoon at Jane B. Moore Field in Auburn, Ala., to complete a three-game sweep of the Tigers and earn their 12th consecutive victory.

No. 11 Arkansas (31-3) improved to 12-0 in the SEC and is the only remaining unbeaten team in the conference. The Razorbacks outscored the No. 25 Tigers 11-1 in the three-game series and posted their seventh shutout of the season.

Both of the Razorbacks’ runs were unearned.

McEwen walked and scored in the first inning when Auburn’s Alyssa Rivera mishandled a ball in right field. In the sixth inning, McEwen’s infield ground out to first drove in Keely Huffine, who was hit by a pitch to start the inning and advanced to third on a throwing error.

Pitchers Jenna Bloom (7-1) and Autumn Storms combined on a three-hitter. Bloom went 5 innings, gave up 3 hits and struck out 3. Storms tossed 2 perfect innings — striking out 4 of the 6 batters she faced — to collect her third save.

Braxton Burnside, who drove in all three runs in Friday’s 3-0 victory, was walked in all four plate appearances Saturday.

Sam Torres also had two hits for the Razorbacks while Larissa Cesena doubled.

Auburn (19-11, 1-8) picked up two hits in the third inning. Makayla Packer opened the inning with a single but was erased on a double play. Sydney Cox doubled but was left stranded when Tyler King hit into a ground out.