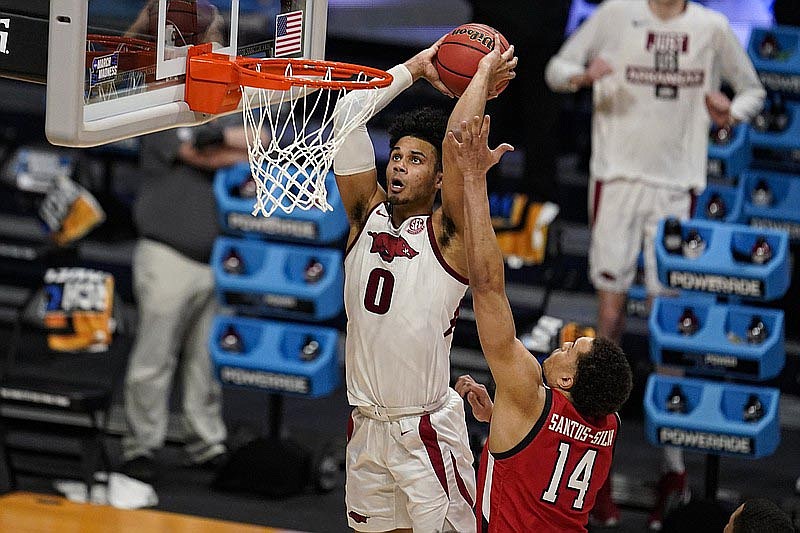 Arkansas forward Justin Smith (0) gets a dunk in front of Texas Tech forward Marcus Santos-Silva (14) in the second half of Sunday’s game at Hinkle Fieldhouse in Indianapolis. (AP Photo/Michael Conroy)

The first in a nine-part series reviewing Arkansas basketball in 2020-21.

• Natural ball mover and shot creator for teammates. Arkansas was a much different team on both ends of the floor when Justin Smith was in the lineup, evidenced by the team’s stellar record when the forward was healthy. One of the best ways he impacted games — and I felt it was often overlooked — was through his passing. Down the stretch of the season he truly blossomed as a scorer, but when the Razorbacks began to get their season back on track in late January and early February, Smith showcased tremendous vision and created open and efficient looks for teammates on a regular basis.

Prior to transferring to Arkansas, Smith had never finished with four or more assists in a game. He did so twice in a five-game stretch against Oklahoma State and Florida, and added three assists in four other games. Smith recorded an assist rate of 10.0%, according to KenPom data. His previous season high at Indiana was 6.4% as a sophomore.

• Team Dad. I talked about this quite a bit during the season. Smith was seemingly always steady and had his emotions in check, and that rubbed off on his teammates. His maturity and emotional stability, honestly, was remarkable. It’s cliche to say a player or a coach never gets too high or too low during the course of a game, but that’s Smith in a nutshell. He is one of the best I’ve seen, too, at being able to put a bad play or bad possession behind him and move on, knowing that the next possession is the most important and the one that could ultimately alter the outcome of a game. Also, if he missed a shot in a big moment, his demeanor did not change. On a number of occasions I can remember Smith being fouled and missing the mark on a shot around the rim he probably thought he should have made, but he simply clapped his hands, turned around and walked to the line. He did not mope, become frustrated or psych himself out. Smith kept a level head.

I started calling him Team Dad in the nonconference portion of the schedule. When he shared the floor with a number of Arkansas’ young guys early in the season, he did not hesitate to grab them during short breaks in the action and let them know what they were doing wrong and why it was wrong. Leading without tearing players — particularly young ones — down is essential, and Smith did it well. As Moses Moody once said, Smith did not talk on the floor just to talk. There was a valid reason for everything he told his teammates. Smith had the respect of every player on the roster.

• Terror on offensive glass. Smith is undoubtedly one of the best offensive rebounders the program has seen despite playing for the Razorbacks only one season. According to HogStats.com, he finished with the record for most offensive rebounds per game (3.3) in an Arkansas career since offensive and defensive rebounds started being tracked in 1986-87. He is in good company, too, among players who averaged three-plus per game. Corliss Williamson grabbed 3.0, Bobby Portis 3.1 and Derek Hood 3.2.

Smith grabbed four or more offensive rebounds in 10 games, and at least one in all 28 games he played in. He abused Oral Roberts around the rim in the teams’ two meetings, adding 21, including a career-high 11 in the Sweet 16. According to KenPom, he recorded an offensive rebound rate of 11.1%, which ranked No. 122 nationally, and was No. 18 in SEC-only games despite missing four games. Smith’s offensive boards turned into near-instant offense, whether on putbacks or layups/dunks moments later. He scored 10 times in the postseason immediately after grabbing an offensive board. Smith posted a PAM — points above median, which calculates how many additional points a player scores when compared to what an average player would have scored with those shot attempts — of 13.4 at the rim following offensive rebounds. That figure is a team high.

• Terrific defender. According to Sports Reference, Smith finished second on the team in defensive win shares at 1.6. That is an estimate of the number of wins contributed by a player on account of his individual defensive play. Much like Tate and Davis at the guard spots, Smith routinely took on the opponent’s top offensive player in the frontcourt and more than held his own regularly. I believe his best showing on that end came against Texas Tech in the second round of the NCAA Tournament, when he limited Red Raiders players to 3 of 17 from the floor and 1 of 13 inside the arc when he was the nearest defender.

Other notable performances: at Kentucky — 2/9, at Missouri — 3/10, vs. Florida — 2/8. Smith set career highs in steals (34) and blocks (18), too. In nine games he finished with two-plus steals, and he had five twice against Colgate and in Arkansas’ home win over Florida. Smith did not block more than two shots in a game, but when he swatted a shot it was typically timely and emphatic. His defensive anticipation was stellar and would at times ignite a one-man break.

Smith’s versatility and solid feet allowed him to defend 1-5, and Eric Musselman labeled him one of the country’s best defenders when checking 3-5. He was at a height disadvantage quite a bit at 6-7, especially when tasked with playing a small-ball 5, but he made up for it with quickness, explosiveness and strength.

• Became a better player after injury setback. Watching games on TV or from the sideline did not sit well with Smith as he battled an ankle injury suffered in the SEC opener at Auburn. He rehabbed at warp speed. Teammates commented that he was a pro’s pro in terms of taking care of his body. Once he knocked off the rust after 2-3 games in late January, he put a lot of miles on his ankle and held up remarkably well. From Jan. 30 on, he played at least 37 minutes in 11 games.

He was hyper-efficient down the stretch, too, shooting better than 65% in the second halves of the last 12 games. And he even added a new shot to his bag with the Antawn Jamison runner, which he pulled out in the SEC Tournament and NCAA Tournament with great success. That alone said a lot about his want to play far beyond college, taking the time to work on and add a new wrinkle opposing teams had not seen before and could not account for right away.

For the season, he led Arkansas in scores in the lane with 145 on 63.9% shooting. Tate was second with 85. Smith finished with 130 scores at the rim on 64%. For context on his elite play in the restricted area, Moody and Davis combined for 127 buckets at the rim.

• Limited success with his jumpshot. Smith did not showcase a great deal of perimeter shooting in his three seasons at Indiana, and that much remained true in one year at Arkansas. He was a tremendously impactful offensive piece for the Razorbacks, though, because he was put in advantageous positions by Musselman and his staff, and he was wildly efficient for long stretches. Outside the lane, however, he was pretty limited.

According to shot chart data collected throughout the season, he made 8 of 35 two-point attempts outside the painted area. He had decent success on the left side of the floor (4/9), but the sample was small. Smith knocked down his lone two-point jumper above the foul line, too, but he finished 3 of 25 on the right side of the floor. He was 1 of 11 the first three months of the season and 2 of 14 in February and March. Three of his eight two-point buckets beyond the lane came in March on 13 attempts.

Smith knocked down just 5 of 23 three-point attempts for the season, too. But when you’re nearly automatic in the lane and around the rim, it winds up not being a non-issue. I do, though, believe he will have to become a more consistent jumpshooter in the midrange if he hopes to play a while at the next level.

• Not always locked in on the defensive glass. This is probably a little nitpicky, but it was a point Musselman brought up periodically throughout the season.

Smith was so good and downright dominant on the offensive glass for games at a time, but the staff wanted to see the same level of effort in grabbing opponents’ misses as well. He finished second on the team in defensive boards with 111, again, minus four games due to injury, but he recorded three or fewer defensive rebounds in 15 games. And in 13 games he had more offensive boards than defensive boards.

At the same time, Arkansas’ guards were solid defensive rebounders and ate up some of those chances. Moody averaged 3.8 per game, Davis 3.3 and Tate 2.8. Smith couldn’t grab them all, but he definitely got his fair share.

• Turnover troubles popped up from time to time. This reared its head more when Smith was being asked to play a lot of minutes late in the season, when he likely felt the need to try to make things happen on the offensive end. Like I mentioned at length above, Smith was a great passing forward, but he also had a tendency to turn the ball over after driving into traffic. A perfect example of that was against Missouri and LSU in the SEC Tournament. He would make the right play driving the ball, but execution of the pass was lacking. It was sometimes unclear who he was targeting on the play.

Body control, I thought, was rarely an issue, which speaks to his basketball IQ and understanding of defenses, driving lanes and angles. He was seldom hit with an offensive foul. Most miscues, it seemed, came on traveling calls and errant pass attempts through multiple bodies when tired. Overall, he finished with a turnover rate of 14.9%, according to KenPom, which was a career low.

Best Smith quote: “I’d say so. This game or the Florida game, the Missouri game, I don’t know. The last couple of games I guess I’ve been playing pretty well.” — Smith when asked if his game vs. LSU on Feb. 27 was his most complete performance of the season

Best quote on Smith: “Justin is a pro’s pro, honestly, when it comes to his work ethic. He takes care of his body, man. You don’t see too many guys have surgery in the middle of the season and be able to come back and have the year he’s been having, especially here down the stretch. Between the SEC Tournament and how he finished the season he’s an instrumental piece to our team. Honestly, he has a hand in us winning every single game, man.” — Jalen Tate