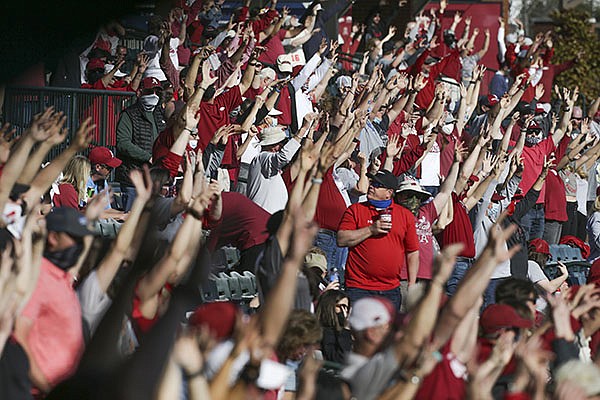 Arkansas baseball fans call the Hogs during a game against Murray State on Sunday, March 7, 2021, in Fayetteville.

FAYETTEVILLE — The University of Arkansas plans to submit bids to host NCAA baseball and softball regionals on its campus.

Bids for the two sports are due by next Monday, significantly earlier than in other years. According to an NCAA memo sent to universities last Friday, more lead time is needed this year to determine hosting sites in order to ensure covid-19 testing protocols are functional at each site.

According to the NCAA, the super regionals will be played at one of the 16 regional sites, even if the home team has been eliminated. In the event a university is selected to host a regional and its team does not make the postseason, it will also still be required to host.

Arkansas stands a good chance to be selected as a host in both sports, based on merit. The Razorbacks’ baseball team is ranked No. 2 this week with an overall record of 22-4. Arkansas’ softball team has a record of 31-3 and is ranked No. 11.

“The University of Arkansas looks forward to submitting bids to host NCAA postseason play at both Bogle Park and Baum-Walker Stadium,” UA spokesman Kevin Trainor said in an email.

The Razorbacks’ baseball team hosted an NCAA regional in the last three NCAA Tournaments that were held from 2017-19, and as a top-8 overall seed, Arkansas hosted a super regional in 2018 and 2019.

Arkansas’ softball team hosted and won a home regional for the first time in 2018.

The regional weekend typically draws large and sometimes record-breaking attendances at Arkansas. The NCAA memo states attendance policies have yet to be developed for this year’s tournament.