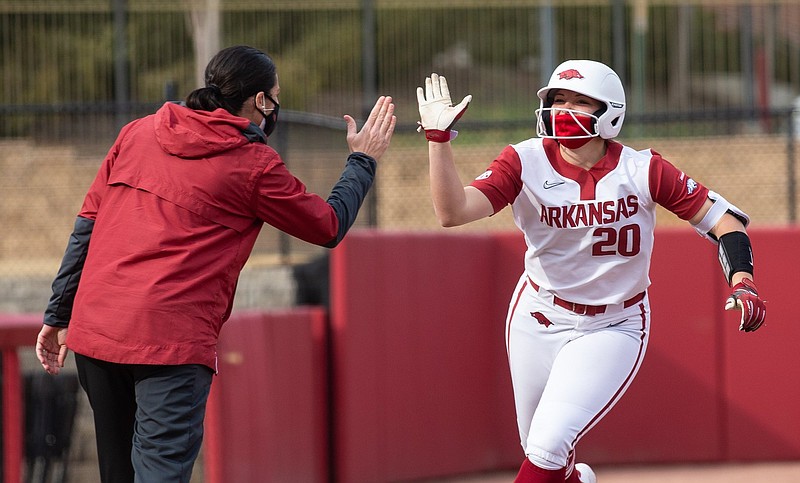 Arkansas left fielder Hannah Gammill (right) is congratulated by Coach Courtney Deifel after a home run during a recent game. Gammill is among a handful of players who are out for the Razorbacks as they begin a three-game set with South Carolina today. (Special to NWA Democrat-Gazette/David Beach)

FAYETTEVILLE — Times surely have changed for the University of Arkansas softball team.

Auburn’s lone run of the series was a meaningless seventh-inning score Friday with the Razorbacks leading 6-0. Arkansas has now won six in a row against the Tigers.

That’s a serious change from when Coach Courtney Deifel first came to Fayetteville. Auburn run-ruled the Razorbacks three times to the tune of a 54-0 combined score in Deifel’s first season in 2016.

The sweep of Auburn is the latest feather in the program’s cap. The Razorbacks are off to their best start overall and in league play, and they have matched the best national ranking in program history.

Deifel wants observers to understand the magnitude of the Razorbacks winning 12 consecutive SEC games, albeit against four teams with a combined league record of 7-32.

“I was watching one of the games yesterday and they were talking about us being 12 and 0, and they’re like ‘But their conference schedule is back-loaded, so we’ll see what they can do.’

“Yeah, we will see what we can do. We do have some tough matchups out ahead of us. Every matchup’s tough, but it’s hard to sweep in this conference … for our team to do that four times in a row, it’s huge.

“We know exactly what’s out ahead of us, but it doesn’t change what we’ve done and it’s not an easy thing to do, and this program being in the spot where we’ve done that is incredible.”

The four league opponents left on the Razorbacks’ schedule have a combined SEC mark of 25-16, beginning with No. 4 Alabama this weekend. The Crimson Tide (26-4, 9-3) are a half-game behind Florida for second place in the league standings.

Redshirt freshman Jenna Bloom, who earned the win in the circle for Arkansas with five scoreless innings Saturday, was on a recruiting visit the weekend Auburn destroyed Arkansas five years ago. Deifel, who is in her sixth season at Arkansas, recalls talking to Bloom and her family, who are from Huntington Beach, Calif., after one of those games.

“I said, ‘Please trust where we are going. Please see where this program is going and our vision,’” Deifel said. “She said, ‘I do, I do.’ And she committed shortly after that.”

The belief from players such as Bloom, Mary Haff, Autumn Storms and Braxton Burnside have helped engineer a huge turnaround from 1-23 in the SEC that first season to this year’s program-best start.

Deifel points to the fact the Razorbacks were unanimously picked by the coaches to finish last during her first two seasons in Fayetteville.

“It’s nice to have the moment to step away for a second and say, ‘Wow, this is pretty cool what these players have done,’ and look at the growth over the last five or six years,” she said.

Burnside went 4 of 7 with 2 home runs and 6 RBI in the first two games, then was walked 4 times — 3 intentionally — in the final game of the series. The fifth-year senior from Paragould holds the single-season school record for home runs with 19. She ranks second in the country in home runs and fourth in RBI.