Fear of failure drives Catalon to expand his game 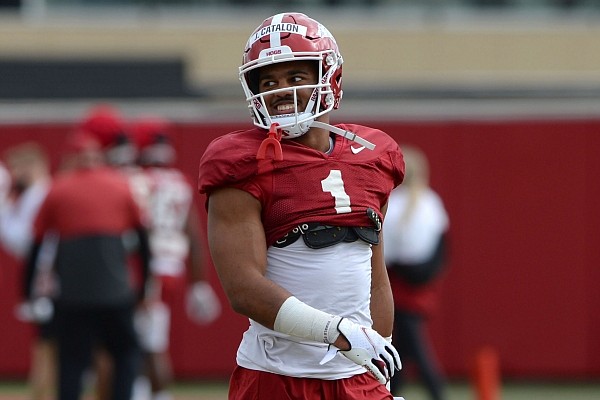 Arkansas defensive back Jalen Catalon (1) participates in a drill Tuesday, March 23, 2021, during practice at the university football practice facility in Fayetteville. Visit nwaonline.com/210324Daily/ for the photo gallery.

FAYETTEVILLE — After putting together the kind of season that has come along only once over the last decade-plus, Jalen Catalon had one thing on his mind during the offseason.

That was to become a more consistent player, he said Tuesday following Arkansas’ 10th practice of the spring.

Despite being the first SEC freshman since Tennessee’s Eric Berry in 2007 to finish with at least 86 tackles and three interceptions, he’s driven to be better. He totaled 99 tackles, broke up 4 passes and forced 2 fumbles although he missed the equivalent of one game in a 10-game All-SEC schedule due to targeting disqualifications.

Catalon, too, was a first-team Freshman All-American by the Football Writers Association of America, the first Razorback to earn the nod since Dre Greenlaw in 2015. But he has continued to work as if he was snubbed by voters.

“I feel like I led more just by the way I play, but I realized that people pick up off my energy, and I feel like my words hold power to our defense and they listen,” Catalon said. “I’m trying to be more of a leader as far as like me communicating that and showing my actions, and just being a consistent player to help my defense.

“I feel like I made a lot of plays, but there were also a lot of plays I left out there last year in watching film with my coach this past year.”

Catalon added that spring drills are important for him in growing his voice in the secondary and ensuring he is assignment sound.

He showcased progress in both areas in the Razorbacks’ second scrimmage of the spring on Saturday. Catalon and the secondary had a strong day.

He had a pair of bigs hits, one for lost yardage, and broke up a pass. Catalon said defensive coordinator Barry Odom was pleased with the energy his unit operated with.

“We were just making plays,” Catalon said. “We were in the right spots, and when the play had to be made, we made it. Like I said, we have some things we have to work on, for sure. Coach Odom is never a satisfied person. He’s always going to nitpick things we can improve on, so that’s what we’re going to emphasize going into this week.

“Overall, the defense I think especially is doing a really good job of flying around and making plays, not just individually but as a whole. I’m excited to see what things are going to be in store for us down the road.”

A semifinalist for the Thorpe Award, given annually to the nation’s top defensive back, Catalon was a first-team All-SEC selection by The Associated Press and a second-team pick by league's coaches.

He was also named to the Freshman All-America first team by The Athletic and was a third-team All-America selection by Phil Steele. Still, Catalon is motivated to expand his game and make an impact at the safety spot for Arkansas like no player has before.

“My fear of failure (pushes me). I don’t want to fail my team,” he said. “I don’t want to let my whole team down, so I think that’s what drives me to make sure I know what I’m doing, make sure I’m going hard, going 100%. I just know how much the coaches invest in us.