Ethan Henderson to transfer from Arkansas 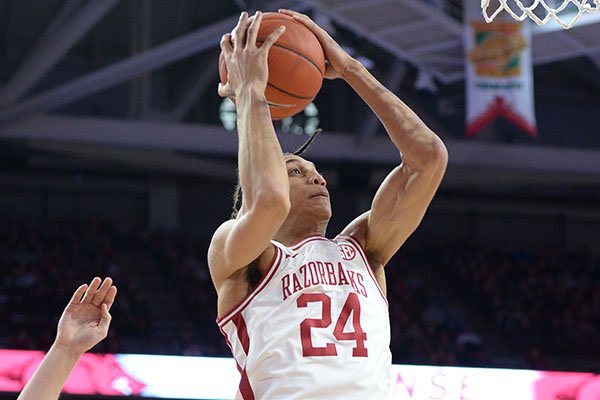 Arkansas forward Ethan Henderson (24) takes a shot in the lane Saturday, Feb. 22, 2020, over Missouri players during the second half in Bud Walton Arena in Fayetteville.

Henderson announced plans to transfer from the Razorbacks on his Instagram account on Wednesday. He is the third Arkansas player hit the transfer market this offseason, joining guard Desi Sills and walk-on Emeka Obukwelu.

“Being a Razorback for the past 3 years has been an unbelievable opportunity,” Henderson wrote. “Being able to play for my home state is an experience I will always remember. … Thank you to the fans that packed Bud Walton Arena every game and made the environment amazing for us.

“What we accomplished this season won’t be forgotten. I am excited to further my college basketball career. I am entering my name into the transfer portal and looking forward to where God takes me next.”

A Little Rock native and former standout at Parkview, Henderson played in 50 games in three seasons with the Razorbacks, starting six in 2019-20. He averaged 1.3 points on 60.0% shooting and 1.6 rebounds over 6.9 minutes per game at Arkansas.

Out of Parkview, Henderson was rated a four-star recruit and the No. 1 player in the state of Arkansas by 247 Sports and ESPN. He won a state championship with the Patriots in 2016 and 2018.

In the NIT in March 2019, he played a then-career high 18 minutes in a win at Providence after not seeing the floor for more than eight minutes in Arkansas’ first 32 games. Henderson scored six points on 3 of 6 shooting and grabbed five rebounds against the Friars.

Henderson again saw his role grow in the final month of the 2019-20 season. He started six of the Razorbacks’ final seven games and played 16-plus minutes four times in that span. In his first career start at Florida on Feb. 18, Henderson scored a career-high seven points in 10 minutes before fouling out.

In Arkansas’ final home game that season, the sophomore added 10 points and six rebounds against LSU. Henderson blocked seven shots in the team’s last two games — 4 at Texas A&M, 3 vs. Vanderbilt — and also added three blocks against Austin Peay on Dec. 3 and vs. Tennessee on Feb. 26.

In 2020-21, he scored a season-high four points three times — vs. Lipscomb and in back-to-back games against Missouri and LSU in the SEC Tournament. He added seven rebounds vs. the Tigers and blocked three shots in 26 minutes.