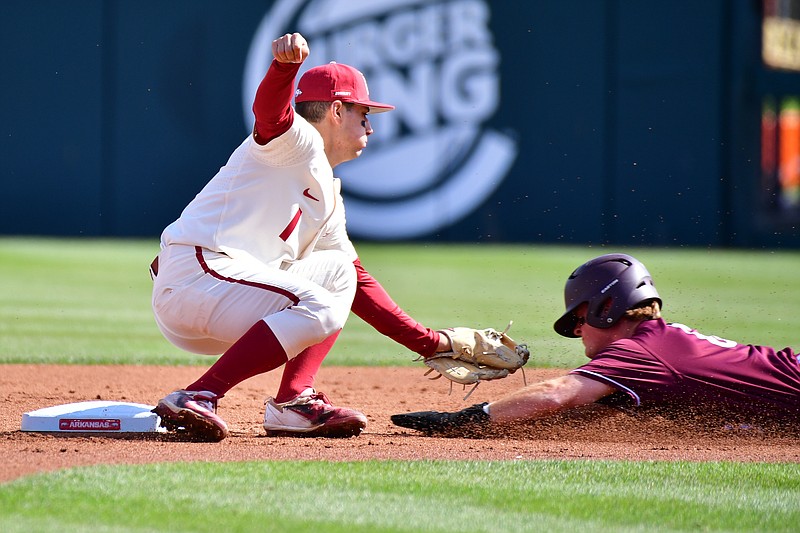 Arkansas second baseman Robert Moore tags out a would be base stealer during Arkansas' game against Arkansas-Little Rock on Wednesday, April 7, 2021. Picture courtesy SEC Media Pool.

FAYETTEVILLE — Brady Slavens hit a three-run home run in the first inning and recorded 5 RBI during Arkansas' 10-3 victory over Arkansas-Little Rock on Wednesday at Baum-Walker Stadium.

"That was a big swing for us," Arkansas coach Dave Van Horn said. "For us to get the lead, and then we hit another home run that inning, I think that helped our team relax a little bit."

Slavens' home run came after Robert Moore and Christian Franklin led off the bottom of the first inning with consecutive walks. Charlie Welch added a two-out home run later in the inning to give the No. 2 Razorbacks a 4-0 lead.

Moore extended Arkansas' lead to 5-0 in the fourth inning with a solo home run that bounced off the scoreboard in right-center field. The Razorbacks (24-4) hit three home runs to bring their season total to 50.

UALR (12-13) manufactured two runs in the fifth inning to bring the game within 5-2, but a Dylan Leach triple in the bottom of the sixth plated Jalen Battles. Leach scored on a wild pitch to extend Arkansas' lead to 7-2.

Nathan Lyons' solo home run pulled UALR within 7-3 in the top of the seventh inning, but Arkansas countered with three runs in the eighth.

Moore, who went 3 for 4 with 2 RBI and 3 runs, had an RBI single to score Cullen Smith in the eighth. Slavens added a two-out, two-run single.

Arkansas has won eight games when trailing by at least three runs, but Van Horn said it was nice to have the lead early in both games against UALR. The Razorbacks never trailed Tuesday's 7-2 victory after Cayden Wallace hit a home run in the first inning.

"It really just helps you manage the guys as far as how you’re going to handle that bullpen," Van Horn said. "It’s always a good feeling to have the lead, obviously — better than scratching, clawing, trying to come back like we’ve done so many times this year. We’ve learned how to do it and we’re pretty good at it, but obviously I’d rather have the lead."

Arkansas starter Caleb Bolden (1-0) picked up his first win of the season. He gave up 4 hits, struck out 4 batters and didn't allow a run in 4 innings of work.

Arkansas' bullpen allowed 4 hits and 3 runs, and struck out 4 in 5 innings.

"I thought our pitching did a really nice job today, especially the bullpen," Van Horn said. "They came in and I think three out of four of them threw the ball really well."

The Razorbacks are scheduled to play again Friday at No. 3 Ole Miss (23-6). The teams are tied atop the SEC West with conference records of 7-2.

Friday's game is scheduled to begin at 6 p.m. at Swayze Field in Oxford, Miss.

"You've got to win on the road if you're going to win the SEC," Slavens said on the Razorback Sports Network postgame radio show. "Going down there and stealing a couple and playing hard like we did at Mississippi State, that's all you can do and all you can ask for."

Heston Tole comes in to pitch for Arkansas.

He throws just 6 pitches and retires the Trojans in order in the ninth. He got two outfield flyouts and a strikeout to end the game.

Dylan Leach strikes out swinging for the first out.

Robert Moore picks up an RBI with a single through the left side scoring Smtih.

Franklin hits a slow roller that is fielded and thrown by the third baseman in one swoop of his glove. Not an easy play to make, but a good job. The runners advance 90 feet. Two outs, two in scoring position for Slavens.

Slavens delivers with a 2 RBI single over the second baseman's head.

Wallace flies out to right to end the inning.

Gabriel Starks in to pitch now for Arkansas.

Russ grounds out to Moore for the first out.

Starks just ran a 96 mph fastball to the plate and then two pitches later threw an offspeed that was low 80s on the gun. That's impressive.

Dickerson grounds out to Moore for the second out.

Rodriquez chops a ball through the left side of the infield for a two-out single.

Starks with a dirty offspeed pitch to get Barnum swinging to end the inning.

Wallace grounds out third and Gregory strikes out to start the inning.

Bates grounds out to the pitcher to end the inning.

The first batter grounds out on a 3-1 put out. Slavens fielded it at first and flipped to a covering Trest for the first out.

The next batter Lyons hits a ball off the foul poul in left field. The ball wasn't very high, but it was high enough to make contact with that pole and give the Trojans another run. The wind is really gusting out to left right now.

Williams pops up to Slavens in foul territory for the second out.

Test with a smooth move to first to pick off the runner and end the inning.

Little Rock goes to the pen as well. They bring in Cal Beardsley.

Smith strikes out looking for the first out.

Jalen Battles has a swinging bunt that is mishandled by the pitcher. He reaches base just before the throw comes and it goes down as an error against the pitcher.

Leach lines one into the left-center field gap. The ball rolls all the way to the wall for a triple. Battles scores from first.

Leach comes in from third on a wild pitch.

Moore then singles through the left side and that's it for Beardsley.

Erik McKnight in to pitch.

Moore steals second and advances to third on a wild pitch. He's stranded there though as Franklins strikes out and Slavens grounds out to first.

Elijah Trest in to pitch for Arkansas.

Trest starts the inning by getting a long flyout to left. It was caught by Gregory just before the fence on the warning track.

He then strikes out the next two batters for the Hogs first perfect inning since the 1st inning.

Calvin Hunt is in to pitch for Wallner

Slavens leads off the inning with a pop out.

Wallace grounds out for the second out.

Gregory walks on four pitches and advances to second on a wild pitch, but he's stranded there after Welch strikes out swinging.

Evan Gray is in to pitch for Bolden

The next batter singles up the middle and that prompts a visit from Matt Hobbs.

A wild pitch advances the runners 90 feet. Hussein hits a hard ground ball to Moore's left. He fields and throws the batter out at first. But the runner on third scores, and the other runner moves up to third.

Williams grounds out to first. The runner from third scores, but now there are two outs and nobody on base.

Russ singles up the middle and Gray falls behind 3-0 on the next batter Dickerson.

Gray comes back and gets a fly ball to left to end the inning.

Battles pops up to the shortstop in short left field for the first out.

Welch follows with a groundout to third.

Moore blasts a ball to right field that bounces off the scoreboard. That one got out of here in a hurry.

Franklin grounds out to end the inning.

Bolden fields a ball behind his back down by his ankles and then throws over to first for the first out.

Dickerson singles and then Bolden walks Rodriguez to put two aboard with one out.

Bolden gets out of the jam by striking out the next two batters. Good showing from Bolden so far today.

The right-handed hitting Wallace hits against the shift, but right at the only fielder on the right side of the field. The first baseman picks up the ground ball and retires Wallace for the first out.

Gregory walks and then steals second.

Welch strikes out and Smith hits a ball to left that carried all the way to the warning track, but the left fielder jumps and makes the catch for the third out.

Bolden gets a one hopper right back to him for the first out.

After a batter reached on a Battles error, Huessein singled to right. The next batter Williams flied out to center, but the runner on second took off thinking there were two outs. Franklin guns the ball in from center to get the retreating runner just in time.

Luke Wallner in to pitch for UALR in the 2nd.

Jalen Battles hits a high pop up to short left-center field that nobody can quite get to. Battles stays on first because he took a tumble coming out of the box. Little Rock should definitely have fielded it, but it goes down as a single since nobody touched it.

Leach flies out to left for the first out.

Battles steals second. He chose a good pitch to run on because it was in the dirt, and he beat the throw by a good margin.

Moore hits a grounder up the middle, but is thrown out by the second baseman Hussein. Battles advances to third.

Slavens is first pitch swinging and he pops up to short right field to end the inning.

Bolden retires the first two batter of the inning, one on a strikeout and the other on a flyout to center, but the Trojans have put together two hits with two outs to threaten. Runners are at the corners for Soto.

Bolden gets Soto looking with the offspeed to end the inning.

Moore draws a walk to start the inning.

Evans is sitting at 92-90 mph, but he's having a hard time locating the zone.

Slavens hits a line drive that gets out of the ballpark in a hurry. He hit it to straight away center field, right off the batters eye.

Wallace strikes out swinging for the first out of the inning.

Gregory goes down on strikes as well for the second out.

The jet stream comes in handy as Charlie Welch hits a high fly ball to left field that carries all the way past the Razorback bullpen.

Smith strikes out to end the inning.

So Evans strikes out the side, but he allows four runs on two hits.

It's about 63 degrees at first pitch at Baum-Walker stadium. The sun is shining and the wind is blowing at a good clip out to left field.

Dylan Leach erases Bolden's walk as he catches Lyons stealing. The ball was in front of the bag and Robert Moore made a really nice play to scoop the ball across his body and then apply the tag.

Hussein flies out to short right field. Wallace and Moore almost collided with each other, but Moore pulled up at the last second and Wallace caught the second out.

Bolden gets a groundout to short to end the inning. He did a nice job of settling down after allowing the leadoff walk.

Arkansas never trailed in its 7-2 victory over UALR on Tuesday. The Trojans stranded nine base runners, including seven in scoring position.

Arkansas’ bullpen has combined to allow 3 runs in 18 innings over the past 4 games.

UALR coach Chris Curry was a volunteer assistant coach at Arkansas for two seasons in 2009 and 2010. The Trojans’ pitching coach, R.D. Spiehs, played for Dave Van Horn at Nebraska from 1999-2001.

Curry is the third of five former Van Horn assistant coaches who will lead their team against Arkansas this season. The Razorbacks defeated Southeast Missouri State — coached by Andy Sawyers — four times and defeated Louisiana Tech — coached by Lane Burroughs — in two of three games. Former Van Horn assistants Tony Vitello and Rob Childress coach at Tennessee and Texas A&M, respectively, and are scheduled to play the Razorbacks later this season…