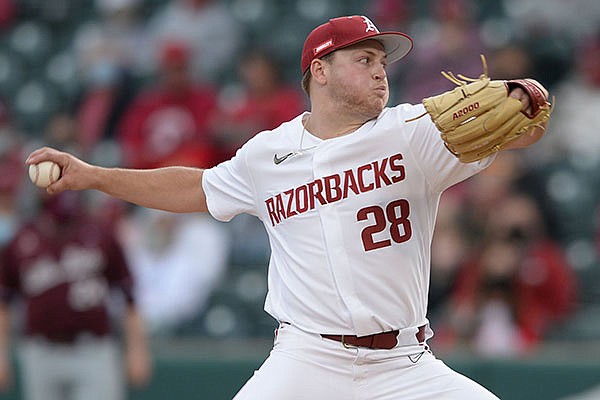 Arkansas starter Kole Ramage delivers to the plate Tuesday, April 6, 2021, during the second inning of play against UALR at Baum-Walker Stadium in Fayetteville.

Ramage, a senior right-hander, started Tuesday night’s game against the Trojans and went 4 2/3 innings in the No. 2 Razorbacks’ 7-2 victory at Baum-Walker Stadium before an announced crowd of 4,225.

When UALR beat Arkansas 17-7 two years ago in the teams’ only previous meeting, T.J. Alexander hit a grand slam off Ramage, who allowed 4 runs and 3 hits in two-thirds of an inning.

Arkansas vs. UALR: How to watch and listen to Game 2

“That was two years ago, so that’s kind of way in the past,” Ramage said. “I really wasn’t thinking about it.

“Luckily enough, I was able to throw some really good pitches, threw a lot of strikeouts. That has a lot to do with [catcher Casey] Opitz behind the plate, as well. We just had a really good game plan going into it about how to attack these hitters and get people out.”

Ramage threw 55 of his 81 pitches for strikes and allowed 5 hits, 2 runs and 1 walk with 7 strikeouts.

“He was spotting his fastball well, which he hasn’t done that a lot this year,” Arkansas Coach Dave Van Horn said. “And he had a really good curveball.

“A pitch that’s usually good for him is his slider, and he couldn’t command it. He did throw a few changeups, but overall I thought he did a good job.”

The Razorbacks (23-4) scored four runs in the first three innings, including a home run by freshman right fielder Cayden Wallace with two outs in the first inning.

“It’s tough [to hit a home run] when the wind’s howling in like it was,” Van Horn said. “Wallace driving one out of the park early, that was a pretty big swing for us to give us the lead.”

“We were feeling good because there were two outs, nobody on,” Curry said. “There was a fastball that wasn’t where [Smallwood] wanted it.

“Now they’re playing from in front and they never trailed. In baseball that’s a big key, to play from in front. That’s what good teams do.”

Second baseman Robert Moore went 2 for 4 with 2 RBI, and center fielder Christian Franklin went 2 for 4 for an RBI to lead No. 2 Arkansas’ offense. Both of Franklin’s hits were doubles.

“I think our pitching staff is loaded and there are a lot of guys who can pitch multiple roles,” said Monke, who thew two innings, on the Razorback Sports Network postgame radio show. “Whenever you have that, a lot of guys can stay fresh and you can just use everybody at the right time.”

“It allowed me to kind of settle in a little bit,” Ramage said. “I just knew I had to go out and throw a lot of strikes.”

UALR (12-12) got two runners on base in the first inning with one out after singles by Nathan Lyons and Tyler Williams, but Ramage struck out John Michael Russ and Noah Dickerson swinging to end the scoring threat.

Ramage said he struck them out on curveballs.

“I would say my curveball was definitely back to where I think it’s a swing-and-miss pitch like I’ve had in previous years,” Ramage said. “I had kind of been struggling early. I wasn’t necessarily able to throw it for a lot of strikes.

“We were aware he was not as good early on as he wants to be, but you could see tonight why they want him to be good and throw for them,” Curry said. “Tonight the velocity was a tick better, and I thought the depth on the slider was good.”

It looked like Ramage would go five shutout innings when he started the fifth with two outs, but the Trojans scored two runs to make it 4-2.

Ramage hit Jorden Hussein with the first pitch to put a runner on first base with two outs. Williams followed with a single and Russ hit a two-run double.

Costeiu replaced Ramage and struck out Dickerson swinging for the third out.

“When [Ramage] gave up the two runs, it happened so fast,” Van Horn said. “We were hoping he could give us five innings and if he would have gotten a quick [third] out there, he probably was going to get to go out for the sixth.

“That all changed real quick. But overall, he did a nice job for us.”

Ramage said it’s been a tough start to the season for him, so Tuesday night’s performance was a welcome boost.

“It’s definitely the most adversity I’ve ever been through, but I just try to take it one day at a time, one outing at a time,” Ramage said. “I feel like I’m stepping in the right direction right now.”