What to expect from Miami transfer Chris Lykes 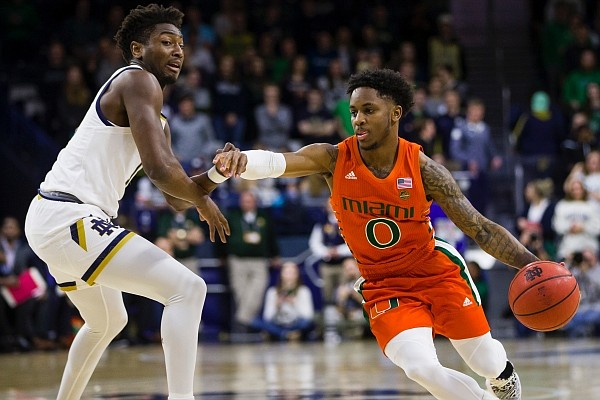 Razorbacks coach Eric Musselman secured the commitment of Chris Lykes, a 5-7 graduate transfer point guard who spent four seasons at Miami. He averaged 13.7 points in his four seasons and shot 41.2% from the floor and 34.7% from three-point range.

Lykes is a ball of energy at the lead guard spot and has tremendous speed both in transition and in the halfcourt working ball screens and getting his own shot.

“But what makes him so difficult to guard is he’s got great skills — dribble skills, dribble moves to get to the basket,” Miami coach Jim Larranaga said during the 2019-20 season. “He finds the open man very well.”

In his final full, healthy season with Miami, he shot 38.1% from three-point range on 134 attempts. He hit 31.8% of his threes the season prior and 34.5% as a freshman. Watching clips of Lykes, he looks comfortable operating in high ball screens and pulling from deep off the dribble.

While he will take his fair share of threes off the bounce, he appears able to properly dissect what the defense is throwing at him in pick-and-roll situations. I saw a good deal of patience and ability to pick up on creases in the defense and exploit passing angles that may only be available for a split second, hitting rollers and teammates who pick and pop.

In a highlight of a game against Duke, he was checked by Jordan Goldwire, a top 10 defender in ACC play in terms of steal rate, according to KenPom, each of the last two seasons, and Lykes used his quickness and short area burst to get to the rim and finish a tough layup.

It looks like Lykes has a solid understanding of when and how to get by a defender whose aim is to be in your face and disruptive on the perimeter. If he shades Lykes one way, he will often attack that top foot and force him to flip his hips in an instant or be left behind. At that point, to keep Lykes in front it will take a fairly egregious hand check.

A point guard who can make defenders pay for their over-aggressiveness is a big plus.

“Lykes is quick and electric,” said David Furones, a Miami basketball beat writer for the South Florida Sun Sentinel. “He can maneuver around the defense on the drive, and he’s a tough shot maker. Being 5-7, he’s used to having to step back and fade away to get his shot off over taller defenders.”

In 2018-19, Lykes led Miami with a PAM — points above median, a calculation of how many additional points a player scores when compared with what an average player would have scored with those shot attempts — of 20.6 at the rim in transition, according to HoopLens analytics. That is pretty special.

The next season, he led the Hurricanes in three-point shooting PAM (24.4) and free throw shooting PAM (30.8). Musselman mentioned Lykes’ tendency to get into the lane and to the foul line. He loves a player who will shoot a healthy amount of free throws.

Defensively, Lykes ranked in the top 25 in steal rate in ACC play as a sophomore, tallying at least one steal in 24 of 32 games. He had 4 seals in his two games last season, 5 against Temple in 2019-20 and 4 at Illinois in December 2019 in a road win for Miami.

Furones added that Lykes, given his height, was essentially a non-factor contesting shots defensively against taller shooters. The Hurricanes defense was markedly better, however, with Lykes on the floor when he was healthy.

Those numbers don’t tell you everything about a guy’s play defensively, but he does have some game on that end.

“The Miami basketball program was down on scholarships most of the time he was there due to the FBI investigation, although nothing was ultimately found,” Furones said. “Because of this, Lykes was often playing close to all 40 minutes of games without enough of a bench available.

“He showed tremendous heart and grit in these instances, many times coming close to pulling off big upsets against ACC powerhouses despite the circumstances.”