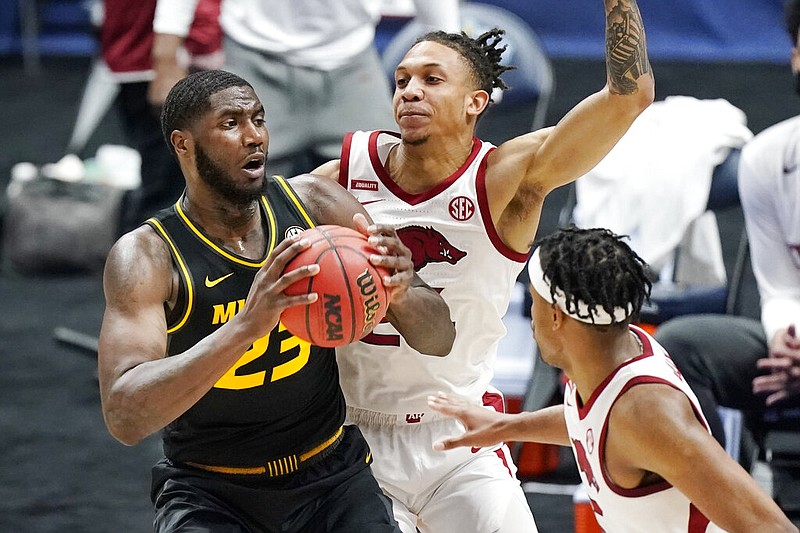 Missouri's Jeremiah Tilmon (23) is defended by Arkansas' Ethan Henderson (center) and Moses Moody (right) in the first half during the Southeastern Conference Tournament on Friday, March 12, 2021, in Nashville. (AP/Mark Humphrey)

FAYETTEVILLE — The last of Mike Anderson’s signees is leaving the University of Arkansas basketball program.

Ethan Henderson, a 6-8 junior forward from Little Rock Parkview, announced Wednesday on his Instagram account that he is entering the transfer portal.

With the NCAA granting players an extra season of eligibility because of the coronavirus pandemic, Henderson will have two years of eligibility at a new school.

“Being a Razorback for the past 3 years has been an unbelievable opportunity,” Henderson wrote. “Being able to play for my home state is an experience I will always remember.”

Henderson thanked Anderson — Arkansas’ coach his freshman season who is now at St. John’s — and current Razorbacks Coach Eric Musselman. He also thanked the Arkansas fans and his teammates.

“What we accomplished this season won’t be forgotten,” Henderson said of the Razorbacks advancing to the NCAA Tournament Elite Eight for the first time since 1995 before losing to eventual champion Baylor.

He played a combined five minutes in three NCAA Tournament games, including two minutes against Baylor in his final appearance for Arkansas. He did not register a stat in the tournament.

“We want to thank Ethan for his hard work and dedication to Arkansas Basketball,” Musselman said in a text message. “We wish him nothing but the best in this next step of his career. He will always be a member of the Razorback family.”

Henderson is the second Razorback to enter the transfer portal since the end of the season along with guard Desi Sills, who averaged 7.5 points and 20.8 minutes while playing all 32 games. The two were the only scholarship returnees from the 2019-20 team.

With the loss of Sills and Henderson — as well as graduate transfer seniors Justin Smith, Jalen Tate and Vance Jackson — the Razorbacks have one scholarship available if no one else leaves the team. If Arkansas guard Moses Moody, a projected NBA Draft first-round pick after averaging 16.8 points as a freshman, decides not to return, the Razorbacks will have two scholarships available.

Sills and Henderson were among six freshmen who signed with the Razorbacks for the 2018-19 season along with Isaiah Joe, Reggie Chaney, Keyshawn Embery-Simpson and Jordan Phillips. Mason Jones also was part of the class as a junior-college transfer.

Joe and Jones are NBA rookies with the Philadelphia 76ers.

Phillips, who transferred to Texas-Arlington and averaged 7.4 points and 19.0 minutes this season, is back in the transfer portal and looking for his third school.