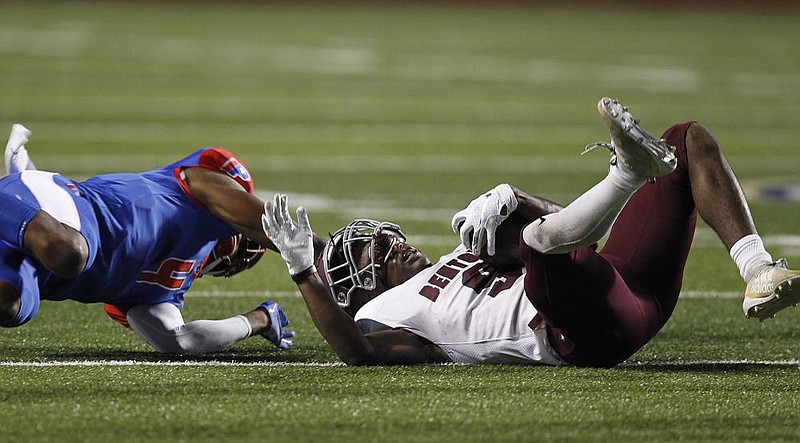 Could the next Isaiah Simmons be a junior at Little Rock Parkview?

Simmons is the former Olathe (Kan.) North wide receiver and defensive back who came to an Arkansas camp and wanted to commit on the spot, but former Razorbacks coach Bret Bielema and his staff could not decide which position he would play. They did not offer him.

Simmons eventually signed with Clemson, initially played as a safety then turned into an All-American linebacker/defensive end whoe was a 2019 first-round NFL draft choice of Arizona, where he had a solid 2020 season.

“I looked at his tapes and I think we play about the same,” White said. “I like that, being compared to him."

He does not yet have one from Arkansas, but is hoping to become the 11th 2022 in-state prospect to be offered by the Razorbacks.

“I love Arkansas and would love to get an offer,” said White, who is also drawing interest from LSU, Mississippi State and Oklahoma. “I am just enjoying the process and I am very new to it. I have got a lot work to do and things to improve with on the field.”

“I have been on the phone with Arkansas the last couple of days,” Bolding said. “He is definitely on their radar and I hope they jump in soon.

“Schools like Oklahoma State, Kansas State and Utah are talking to him every day and telling him that if you learn quickly, you could start for us as a freshman. Now, granted, I have been doing this a while and I know that all of them can have a tendency to have a bill of sale from a recruiting standpoint.

“But I think he has those measurables and the ability to be able to go in and play. Oklahoma State, Kansas State and Utah are hammering him every day. They want him bad.”

Bolding makes it clear that he would rather see White playing for Arkansas instead of against the Razorbacks.

“If you are Arkansas, you don’t want to lose one of those kids out of state to someone else,” Bolding said. “That’s been one of our issues in the past here. We have lost some of those guys and we don’t want to lose this one because he is so versatile. He can play so many different positions, so you are not really taking a chance.

“You are playing against these type of guys and need them to compete and win in the SEC. There is no doubt he is very versatile.”

“Jaylon doesn’t care where he plays,” Bolding said. “There are people that view him as a safety. Oklahoma State, I’ve talked to them the last two days, and they view him as a hybrid safety/linebacker/nickel that is so popular these days.

“Everyone wants to find those guys that can play those type of roles. If he weighed 240, he could be a freak of an inside linebacker.”

White will take over as the starting quarterback for Arkansas signee Landon Rogers (6-4, 215), who will be a freshman next season for the Razorbacks along with former Patriots tight end Erin Outley (6-4, 256).

“He was our backup last year and really has progressed quite well. His throwing mechanics have come a long way. We already know he can run.”

White believes he will be up for the challenge.

“Those are big shoes to fill, but it’s nothing that I can’t handle because I will put in the work,” White said.