What to expect from South Dakota transfer Stanley Umude 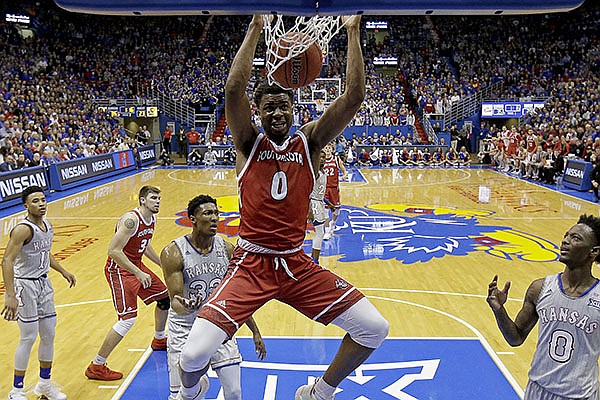 Arkansas coach Eric Musselman and the Razorbacks continued Friday their recent run of splash roster additions for the upcoming season.

Stanley Umude, one of the top scorers and all-around players who entered the NCAA transfer portal in 2021, committed to Arkansas. He is the third transfer to pledge to the Razorbacks for 2021-22, and the second this week, joining Miami guard Chris Lykes.

Arkansas’ first transfer commitment of the spring was Au’Diese Toney, a tough and talented 6-6 small forward from Pittsburgh who was a proven talent in the ACC.

According to Greg Mitchell, a college basketball writer for Mid-Major Madness, Umude wrapped up his Coyotes career as the only player in Summit League history to average at least 21.5 points, 7 rebounds and 3 assists in a season. Since 1992, only 14 players nationwide have met or exceeded those numbers.

For the Razorbacks, Umude is highly likely to step in and make an immediate impact. It isn’t unreasonable to believe, given his skillset, that he could play his way onto an All-SEC team at the end of next season.

At 6-6, 210 pounds, Umude is the kind of position-less player Musselman covets.

He features a versatile game in which he is a threat in pick-and-pop situations as a 35% three-point shooter in 2020-21, can face up in the midrange and hurt opposing defenses there, and beat his defender off the dribble with quickness and strength.

In his final three seasons at South Dakota, he recorded a PAM — points above median, a calculation of how many additional points a player scores when compared with what an average player would have scored with those shots — of 25, 19.1 and 23, respectively, at the rim in non-transition, non-offensive rebound situations, according to HoopLens analytics.

“He killed us,” Self told reporters. “Whoever guarded him, he was without question the best player on the floor, I thought.”

Following that game, he became one of the best scorers and most-utilized players in college basketball, reaching double figures in 67 of his next 75 games. Last season, Umude had the fifth-highest shot percentage in the country, according to KenPom data, and the No. 6 usage rate.

He drew an average of 6.4 fouls per 40 minutes played, according to KenPom. That mark ranked 29th in the nation. And Umude made 80% of his 140 free throws.

Sixteen times in his career Umude has scored at least 25 points, including a career-high 41 and 11 rebounds against South Dakota State last December in South Dakota’s first win of the season. He buried 14 of 20 two-point attempts and 3 of 6 threes, prompting South Dakota State coach Eric Henderson to say Umude is “a special player. He gave us the business.”

“If he gets to his spot, he’s either going to make it or miss it,” South Dakota coach Todd Lee said. “But there’s not much you’re going to do to bother him.”

Brian Haenchen, a South Dakota basketball beat writer for the Argus Leader, wrote that Umude used last season as a showcase for his development as both a player and a team leader.

He was the Coyotes’ lone returning starter and took on a more vocal role, pushing a young roster through a trying offseason. By Feb. 5, Umude had led South Dakota to a 9-0 start in the Summit League and the program’s first win at South Dakota State since the 1999-2000 season.

“He really has a great midrange game, and he does a lot of things other players can’t do with his athletic ability,” South Dakota forward Tyler Hagedorn told KDLT Sports in 2019. “He’s going to block shots and get some big-time rebounds, and there’s nothing you can do to stop him.”

In 2018-19 and 2019-20, Umude posted block rates of 5.1% and 4.4%, respectively, according to Ken Pom, so he has shown the ability to be a sturdy, shot-altering defender. He was less of a deterrent last season, blocking 9 shots, but 3 came at Colorado, which earned a 5 seed in the NCAA Tournament.

South Dakota was 5.7 points better than its opponents last season per 100 possessions with Umude in the lineup. It was the second-best net rating of his career.

“He brings great versatility and was extremely well-coached at South Dakota by Todd Lee,” Musselman said in a statement. “He has a lot of experience and has a winning background.

“We feel the addition of Stanley and Au’Diese (Toney) on the wings will give us the ability to play position-less basketball.”