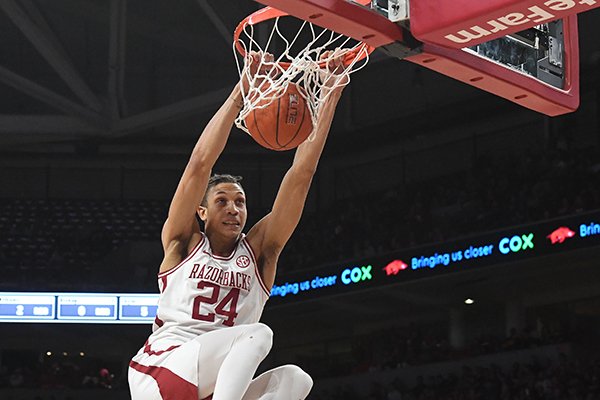 Arkansas forward Ethan Henderson dunks during a game against LSU on Wednesday, March 4, 2020, in Fayetteville.

A Little Rock native, Henderson committed to Texas A&M on Saturday, according to a post to his Twitter account. The 6-8 forward announced Wednesday his intentions to transfer from Arkansas.

He was one of two scholarship players to enter the transfer portal following the team’s Elite Eight run, joining guard Desi Sills. The former Jonesboro standout has not announced a transfer destination.

Out of Parkview, Henderson was rated a four-star recruit and the No. 1 player in the state of Arkansas by 247 Sports and ESPN. He won a state championship with the Patriots in 2016 and 2018.

In 2020-21, he scored a season-high four points three times — vs. Lipscomb and in back-to-back games against Missouri and LSU in the SEC Tournament. He added seven rebounds vs. the Tigers and blocked three shots in 26 minutes.