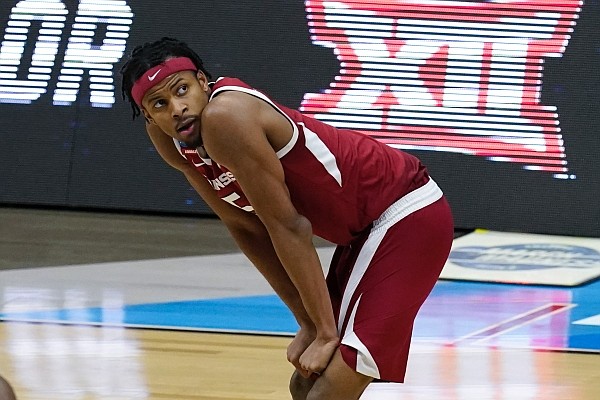 Arkansas guard Moses Moody (5) looks to the scoreboard during the second half of an Elite 8 game against Baylor in the NCAA men's college basketball tournament at Lucas Oil Stadium, Tuesday, March 30, 2021, in Indianapolis. Baylor won 81-72. (AP Photo/Darron Cummings)

FAYETTEVILLE — Moses Moody is headed to the NBA after one season playing for the University of Arkansas.

Moody, a 6-6 guard from Little Rock, announced Friday he is entering the NBA Draft and will sign with an agent rather than return to Arkansas for his sophomore season.

The announcement wasn’t a surprise considering Moody has been projected to be a first-round pick — and possibly go in the lottery, which includes the first 14 picks — by numerous draft websites.

Moody, who turns 19 on May 31, will be the Razorbacks’ first one-and-done NBA player.

“We fully support Moses and his family in the decision to enter the NBA Draft,” Razorbacks Coach Eric Musselman said in a statement. “We were excited last spring when they trusted us to continue his basketball journey.”

Musselman previously was an NBA head coach with the Golden State Warriors and Sacramento Kings.

“I’ve said it many times that Moses handles his day-to-day business like a pro and he will be ahead of the curve when he starts his professional career,” Musselman said in his statement. “Moses was able to showcase his many talents in our system – including being our leading scorer and second-best rebounder – and we believe he continued to make improvements throughout the year to put himself in this position.

“We will continue to work with Moses and his family as well as do all we can with our connections in professional basketball to promote Moses.”

Moody was voted a first-team all-SEC pick by the coaches and media, and also was voted the conference’s freshman and newcomer of the year. He was an Associated Press honorable mention All-American.

Moody helped Arkansas to a 25-7 record and advance to the NCAA Tournament Elite Eight for the first time since 1995.

After playing at Little Rock Parkview as a high school freshman and at North Little Rock as a sophomore, Moody played two seasons at Montverde Academy in Florida before signing with Arkansas last year.

“I came home to right the ship, to help spark the movement that put Arkansas back on the map,” Moody said in a Twitter post, in which he also thanked the Arkansas coaching staff, his teammates and Razorbacks fans. “And I wanted to be part of a team that would be remembered as winners.”

With Moody’s decision to enter the draft and Friday’s announcement that Stanley Umude has signed with Arkansas as a graduate transfer from South Dakota, the Razorbacks have one scholarship available if no other players leave the team.

The Athletic and NBADraft.net project Moody as the No. 7 pick. Among other mock drafts, Bleacher Report projects him as the No. 9 pick, NBADraftRoom.com No. 10, CBSSports.com No. 12, BasketballNews.com No. 14 and ESPN No. 21.

“Moody is an elite level three-point shooter who is one of the best overall shooters in his class,” NBADraftRoom.com wrote in a scouting report. “He’s got an effortless release and is deadly accurate from downtown.

“He’s young for his class, but can hold his own against much older competition thanks to his great size for position and that sweet shooting stroke. He’s got broad shoulders and a solid frame which will carry more weight as he grows.”

NBADraftRoom.com compared Moody to Allan Houston, the former Tennessee star who was the No. 11 pick in the 1993 NBA Draft and averaged 17.3 points in 12 seasons with the Detroit Pistons and New York Knicks.

“Moody is much more than just a catch-and-shoot player,” the scouting report said. “Moody plays a complete game, challenging on defense, holding his own as a rebounder and making plays in transition. He’s got a nice feel for scoring in the lane and a smooth mid-range game.

“Moody is developing the ability to be a primary ball handler and get his own shot and he’s a very willing passer who understands team concepts and doesn’t let the ball stick in his hands. His dribble drive game is not yet a strength but shows promise.”

“To Razorback nation (from every corner of the state), thank you for calling the hogs and taking this ride with us,” Moody wrote on Twitter. “Somehow you made it seem like we were playing in front of a packed house every night.

“I hope I made you proud in the process and showed you what can happen when you support homegrown talent.”