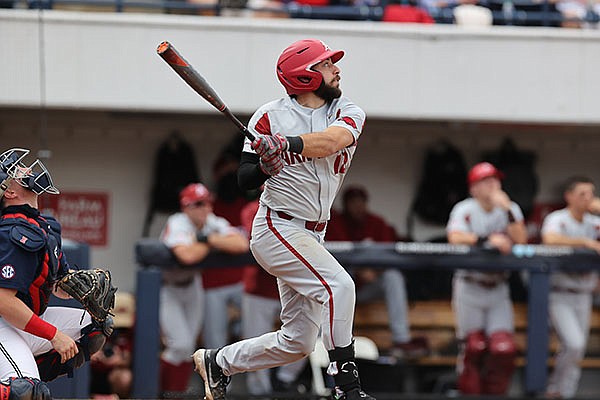 Another big sixth inning helped carry the University of Arkansas to another comeback victory Saturday against Ole Miss.

The No. 2 Razorbacks beat the No. 3 Rebels 7-3 in the opener of a doubleheader at Swayze Field in Oxford, Miss., when Arkansas won its ninth game after trailing by three or more runs.

Ole Miss came back to win the nightcap 13-6, again taking a lead but this time holding onto it.

“Our bullpen was tremendous in game one,” Arkansas Coach Dave Van Horn said. “They held them down and gave us an opportunity to come back. That was a big win for us.”

The Razorbacks started their rally in the opener with three runs in the sixth inning — where they have scored 46 of their 225 runs on the season — to erase the Rebels’ 3-0 lead.

“Obviously I’d love to score early and get a lead, but bottom line, I just want to finish the game with more runs than they do,” Van Horn said. “Credit to the team. They can win no matter what the score was. I don’t think getting three or four runs down bothers us a bit.”

Arkansas took a 5-3 lead in the seventh inning with two runs off Tyler Myers.

Austin Miller then came in to pitch for Myers and walked Cayden Wallace to load the bases. Christian Franklin walked to force in Moore, and Goodheart scored on a wild pitch by Miller to give the Razorbacks a 5-3 lead.

Arkansas made it 7-3 in the eighth inning on Wallace’s two-run double.

Kevin Kopps earned his fourth save by holding the Rebels scoreless over the final three innings. It extended his streak of scoreless innings to 19 2/3.

“I didn’t realize it was that many innings,” Van Horn said. “I don’t pay attention to that too much. I just know that every time we put him in the game, we have a lot of confidence in him and what he can do.

“That’s pretty amazing because this is a tough league and most of those innings are against SEC-type batting lineups, so it’s a super job by Kevin.”

Ole Miss had two singles in the seventh inning, but Moore — who plays second base — and shortstop Jalen Battles turned a double play to get Kopps out of the jam.

The Rebels loaded the bases with one out in the eighth inning, but Kopps struck out Peyton Chatagnier and Kevin Graham to end the threat.

Ole Miss catcher Hayden Dunhurst, who was 5 for 5, led off the bottom of the ninth inning with a single, but Battles and Moore again turned a double play on a ground ball by Calvin Harris. TJ McCants then struck out swinging for the final out.

Goodheart went 3 for 4 and scored 3 runs. Franklin and Wallace each drove in two runs.

Ole Miss had 14 hits and 5 walks, but left 13 runners on base and struck out 16 times. The Razorbacks had eight hits and drew nine walks.

Ole Miss starting pitcher Gunnar Hoglund didn’t allow a hit through the first five innings, but the Razorbacks worked four walks in that span and got into several deep counts.

Goodheart got the Razorbacks’ first hit leading off the sixth inning, then after Wallace flied out, Brady Slavens walked and Franklin hit an RBI single.

“We had trouble hitting pretty much everything he was throwing,” Van Horn said. “He was throwing a pretty good slider and keeping the fastball away from us.

“But what we did is we fouled off a lot of pitches. We got deep into counts, 2-2 counts, 3-2 counts, foul ball, foul ball. There were a lot of at-bats like that, that got his pitch count up and really frustrated him. We were glad to see him get out of there.”

A passed ball advanced Slavens and Franklin to third and second base, and Franklin scored on a sacrifice fly by Casey Opitz. Zack Gregory singled in Slavens to tie it 3-3.

Ole Miss took a 2-0 lead in the first inning against Arkansas starter Patrick Wicklander when Jacob Gonzalez and Graham singled and both scored on Dunhurst’s double.

The Rebels made it 3-0 in the third inning, but they left the bases loaded when Wicklander got two strikeouts.

Wicklander, who finished with seven strikeouts, pitched around a leadoff walk in the fourth inning and then was replaced by Zebulon Vermillion. Vermillion went 1 1/3 innings and allowed 3 hits, but he had 4 strikeouts.

In the nightcap, Ole Miss led 7-2 after five innings.

Wallace doubled in Goodheart to pull Arkansas within 8-6 in the eighth inning, but the Rebels answered with five runs in the bottom of the inning, including a two-run triple by Dunhurst, to make it 13-6.

Franklin’s home run to lead off the seventh cut the Ole Miss lead to 7-5, but the Razorbacks left the bases loaded.

“We were one big hit away from breaking that thing wide open, or tying it or getting the lead,” Van Horn said.

“[Lockhart] competes hard and throws strikes,” Van Horn said. “He usually gets us four, five innings. It’d be nice to get that, at least.”

“I would think that he might be available for a little bit,” Van Horn said. “I don’t think it’d be three innings, but it might be an inning or so.”