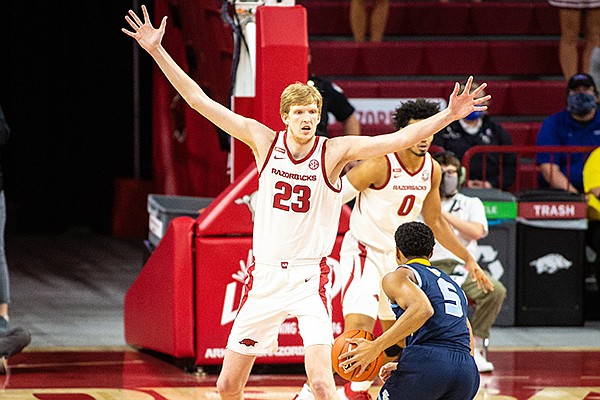 The seventh in a nine-part series reviewing Arkansas basketball in 2020-21.

• Rim protection and shot altering. Connor Vanover starred in the early stages of the season and performed better than advertised behind one of the nation’s best block percentages, according to KenPom data, and great touch from three-point range. His proficiency from deep faded with the exception of a few games, but his ability to alter and block shots remained fairly steady at the very least. Vanover finished his first season in uniform for Arkansas with a block rate of 11.4%, according to KenPom. He wound up not receiving a national ranking in that category by the site because it requires players to be on the floor for at least 40% of their team’s minutes. Vanover played 36.7% of the Razorbacks’ minutes. Had he been able to get in the lineup a few more minutes here and there, that 11.4% figure might have risen, and he likely would have landed among the country’s top 15 shot blockers.

In the first six games of the season, Vanover blocked 20 shots, including a season-high six vs. North Texas in Game 2. Opponents were 17 of 57 (29.9%) inside the arc in that span when he was the nearest Razorbacks defender. Then came a 10-game stretch in which he recorded only four, but he bounced back and something of a mean streak surfaced as Arkansas got its season back on track. From Jan. 23 to March 2, Vanover blocked at least one shot in 10 consecutive games and had back-to-back games with five — vs. Ole Miss, at Oklahoma State. He had four in 20 minutes at South Carolina as well.

In those 10 games, Vanover limited opponents to 29 of 87 (33.3%) from the floor, including 26 of 72 (36.1%) inside the three-point line when the nearest defender. One of his best defensive games of the season, I thought, came against Ole Miss. He matched a conference high with 29 minutes, and he held the Rebels to 4 of 17 shooting. He played goalie as Arkansas soft trapped key ballhandlers, blocked five shots and grabbed five defensive rebounds. While it is easy to pick on Vanover because of his height and limitations in some areas, he cannot block every shot, but he did his best to deter everything he could. He holds great value on Arkansas’ roster and can be a difference maker.

• Shot selection, good possessions. Vanover was among the Razorbacks’ best good shot takers. I can recall only a handful of shots the forward took that I wasn’t high on. Many did not like that he pulled the trigger on some shots beyond the arc, but he rarely, if ever, released ill-advised shots. According to data from ShotQuality.com, Vanover’s shot quality points per possession (1.05) ranked in the 80th percentile nationally — fourth best on the team behind Justin Smith, Moses Moody and Desi Sills. Jaylin Williams was fifth, and his SQ PPP of 0.96 fell in the 57th percentile.

Shot Quality data also shows Vanover had a good possession rate of 32%. It is the third-best mark behind Smith (45%) and Moody (34%). His bad possession rate was 18%, lowest among team regulars. In the first 15 games of the season, he turned the ball over only five times, which was terrific and what you hoped for. He isn’t a player who operates with the ball more than a few seconds at a time. Vanover did battle a rough spell turnover-wise, committing three in three of four games in late January and early February.

Overall, he did not hinder the Razorbacks with careless miscues and poor decisions. I found him to be a good ball mover and quality decision maker.

• Solid at the rim when engaged. According to shot chart data collected throughout the season, Vanover finished seventh on the team in scores at the rim. It isn't all that surprising given that he likes to float on the perimeter. His height and crazy length gave him an advantage that he utilized extremely well at times. For the season, he was 39 of 58 (67.2%) in the lower half of the lane, and 41 of 62 (66.1%) on all shots in the paint.

After finishing 16 of 19 shots at the rim in November and December, he went 23 of 38 in January and February. Five of those misses came in Arkansas’ first meeting with Missouri. Twenty-three of his rim scores were dunks, and nine came in February, which I thought was his best all-around month of the season.

According to HoopLens, Vanover posted a PAM — points above median, a calculation of how many additional points a player scores when compared with what an average player would have scored with those attempts — of 12.2 at the rim in non-offensive rebound and non-transition situations. That figure is third best on the team and second among forwards behind Smith.

• Stood out against more-mobile bigs and teams playing with pace. Vanover essentially coasted through the pre-conference portion of Arkansas’ schedule, impacting games on both ends more often than not. When Georgia came to Bud Walton Arena, that is when opponents truly began putting immense pressure on Vanover to move his feet defensively.

Toumani Camara, a versatile 6-8 forward who can step out and shoot the three and take his matchup off the bounce, did just that in the opening minutes of the Bulldogs’ loss, forcing Eric Musselman’s hand. Vanover played three minutes. That was the genesis of four consecutive games in which he played fewer than 10 minutes due to speed and quickness mismatches on the other side and an opponent’s pace of play. Vanover saw the floor for a combined 19 minutes in three games vs. LSU and 13 in two games vs. Alabama — two of the top six teams in the SEC in tempo. He could also be a step or two slow rotating defensively, leading to easy scores.

In those five games, Arkansas’ defense allowed 1.17 points per possession in Vanover’s 109 possessions in the lineup, according to HoopLens. Alabama and LSU rebounded 40% of their misses and shot the three at a 38.5% clip.

• Inconsistent from 3. In my 15 preseason predictions column, I wrote Vanover would wind up shooting 38% from three-point range because I thought he would be in line for a healthy number of attempts as the trailer in transition. Also, with crisp ball movement, I viewed him as a candidate to get clean looks in the halfcourt. Early in the season I felt great about that call, but knew the hyper-efficient rate at which he was throwing in threes would be tough to maintain, especially as the level of competition rose. In Arkansas’ first three-plus games, Vanover hit 8 of 11 threes. Then he missed his last six attempts vs. Lipscomb and things snowballed. He finished December and January a combined 12 of 46 (26.1%) from deep.

Vanover went the next 15 games without hitting multiple threes after knocking down 2 of 8 against Lipscomb, and he had only two such games the rest of the season. He favored the left wing more than any other spot, making 10 of 32 attempts. Vanover finished 4 of 7 in the left corner, 2 of 11 from the top of the key, 6 of 16 on the right wing and 2 of 8 in the right corner. After making 5 of 21 threes on the wings in December and 2 of 10 in January, he shot a bit better from those areas in February on limited attempts — 5 of 10. All of his three-point makes in January came on the left side of the floor.

Again, Vanover did not shoot the three with great precision last season, but he is a capable shooter. I didn’t have an issue with a vast majority of his attempts. I was less of a fan of his two-point attempts left of the lane, where he missed all six shots. Vanover struggling with his touch was also another reason Williams was provided the chance to step in, grow and make an impact. The 7-3 forward will take a lot away from 2020-21 and use it as fuel entering this winter.

• Can be better finishing through defenders. Vanover can afford to become stronger in his base and upper body, which will help with explosiveness and his ability to finish through contact around the rim. He can be a challenge to officiate on the offensive end, so he doesn't draw every whistle he deserves. To counter that, he has to play with a mean streak more often moving forward.

Best Vanover quote: “It just shows you that every game is different, every game has its own identity. Some games are really good matchups, some games are harder matchups for people. It's really good to have a good matchup and do what I can do. I think it was good for my confidence.” — Vanover after his 8-point, 7-rebound, 5-block performance vs. Ole Miss in Bud Walton Arena

Best quote on Vanover: “His size changes the game and he plays the right way. He’s very, very good offensively out on the perimeter of being a guy that can trail, make a three, throw-and-chase, run a dribble handoff. I think the guys love playing with Connor. I really do. I think the players love playing with him and love having him on the floor.” — Eric Musselman after Vanover was plus-30 in 20 minutes in Arkansas’ win over Southern