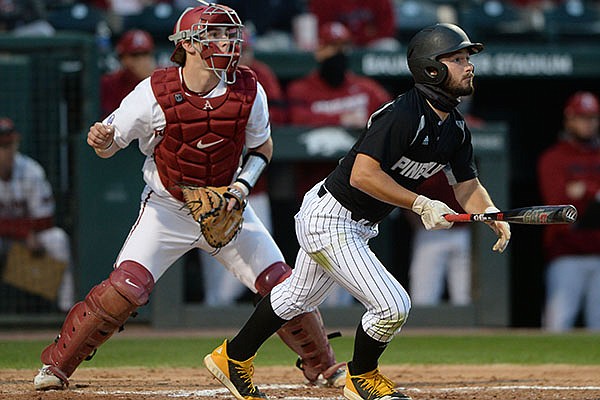 FORECAST According to the National Weather Service, Wednesday will become partly sunny with a high of 63 degrees in Fayetteville. There is a 20% chance of rain before 1 p.m. Northeast winds could gust up to 20 mph.

NOTABLE Arkansas and UAPB are playing this week for the second and third times in their history. The teams were scheduled to play last season, but the game was canceled due to the covid-19 outbreak….Tuesday's game was UAPB's first since a 12-0 loss at Kansas State last Wednesday. The Golden Lions had a weekend series against Alabama A&M canceled….UAPB has lost 12 straight games by an average margin of 6.9 runs per game. In six games against Power 5 teams (Tennessee, TCU, Kansas State and Arkansas), UAPB has been outscored by a combined score of 91-15….Arkansas leads the NCAA with 55 home runs this season. UAPB is allowing 1.4 home runs per game….Arkansas right fielder Cayden Wallace was named SEC freshman of the week Monday….Tuesday was the 25th anniversary of the first game at Baum-Walker Stadium….Arkansas is 17-3 at home this season. The Razorbacks have a 125-24 record at Baum-Walker Stadium dating to 2017….Attendance at Baum-Walker Stadium will be expanded to 6,585 for games during the month of April. It previously had been capped at 5,735 for the final half of March. Attendance was capped at 4,218 to begin the season.