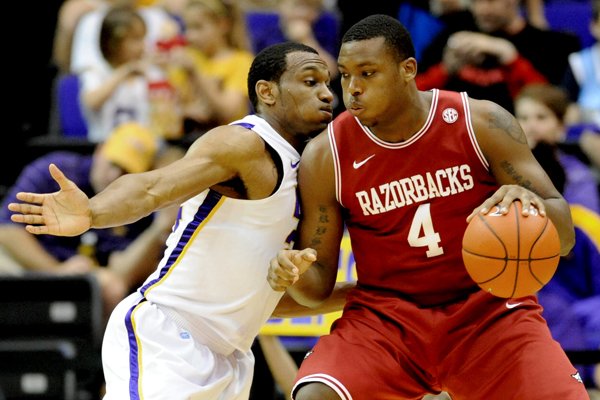 Devonta Abron thinks he last played football when he was about 7, meaning the ideal time to get back into the sport is 21 years later.

In between his football careers, Abron was a starting power forward at the University of Arkansas and TCU. Abron finished his NCAA basketball career in 2016.

"After I finished college I went to Austria and played [professional basketball]," Abron said last Friday. "When I was done playing basketball, I picked up a lot of weight and decided to give football a try."

Today, he's 28 and a starting offensive lineman for a pro football team, the North Texas Bulls -- not to be confused with the North Dallas Bulls, the team made famous in the movie "North Dallas Forty," which was a quiet depiction of Tom Landry's Dallas Cowboys.

No, the North Texas Bulls are a small team in the American Arena League. The Bulls will host their first home game at the Fort Worth Convention Center on Sunday at 3:30 p.m. against the El Paso Bucs.

TCU fans may not remember Abron. He was a part of the those crash-test dummy teams under Coach Trent Johnson when TCU first joined the Big 12 in 2012.

He started his career at Arkansas in 2011, and transferred to TCU for his final three years of eligibility. He was a nice college role player who was a member of overmatched teams.

However, Abron had a hand in one of the Frogs' most memorable games in program history. He came off the bench and chipped in six points and four rebounds in TCU's 62-55 win over No. 5 Kansas on Feb. 6, 2013. It was TCU's first victory against a top-5 team and the first time it defeated a Big 12 opponent.

After he was done at TCU, he briefly played in Europe.

"After I came back from overseas, I really wasn't comfortable playing basketball. I could still score and move, but I wasn't comfortable," he said. "I just decided to take my size and see what I could do on a football field."

He wanted to try out for the XFL last season, but by the time he was ready the league folded. He found a semi-pro team in Dallas to play for, and now he's with the Bulls.

He's not doing this for the money. This league is not exactly flush with cash. Players typically make $100 to $250 a game, plus meals.

A TCU graduate, he currently lives in Keller with his fiancee. He works in Carrollton for a plumbing supply company.

He has good hands and feet, which has made the transition from a basketball forward to a football lineman possible.

"Coming in as a rookie, I didn't expect to get paid much, if anything," he said. "Honestly, I wish I had been introduced to this game a long time ago. I just played basketball. I didn't know football was this much fun. Now keep in mind I wasn't always this size."

The Bulls have two former NFL players on the defensive line and, "When those guys first hit me it was, 'Oh, this is real,' " Abron said. "I love it. It's great competition."

Abron is not exactly sure where football will take him, but he's like everyone else who plays. He wants to see if the next level is interested.

He expressed interest in the CFL or XFL, if it comes back, with the faint hope that maybe an NFL scout will see him and invite him to a camp.

But whenever his football career ends on the field, he wants to continue to work in sports off of it.