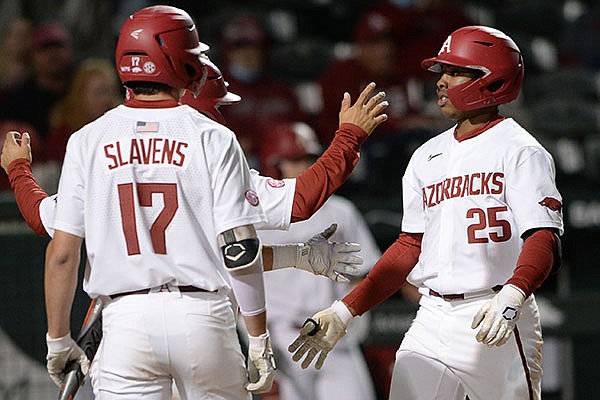 “It’s fun watching a kid like that perform — even when he’s doing it against you,” James said after the No. 1 Razorbacks beat UAPB 12-4 at Baum-Walker Stadium. “Because if you’re a baseball fan, a baseball purist, you’ve got to appreciate a player like Franklin.”

Franklin, a junior from Overland Park, Kan., went 3 for 4, capped by a three-run home run in the eighth inning off Bryce Roesch.

“That pitch was down and away and he drove it 400-plus feet oppo into the top of a building, man,” James said. “Like I told my pitcher, sometimes the hitter is just good.

“When you’re talking about a great hitter and outfielder that can change a game — that’s Franklin. You couldn’t draw nobody up better than him right now in the college game.”

Franklin set a career high for runs batted in, surpassing his previous high of four, which he most recently had against Murray State earlier this season.

“It feels good,” Franklin said. “There’s still a lot of baseball to be played this week. Just not getting satisfied with one game. One game doesn’t mean anything. I want to be able to repeat it.

“But props to my teammates for getting on base for me, and I was just happy to be able to contribute to my team tonight.”

Franklin put Arkansas ahead 4-0 in the second inning with a two-run single. He also had an RBI on a bases-loaded walk in the seventh inning when the Razorbacks scored five runs to push their lead to 9-1.

UAPB starter Joel Barker, a junior right-hander from Russellville, held the Razorbacks to four runs through six innings before tiring in the seventh. He threw 59 strikes on 83 pitches and didn’t issue a walk. His fastball topped out at 86 mph.

“He really didn’t give us anything,” Van Horn said. “He kind of kept us off balance, flipping it up there a lot different [speed] than what we’ve seen.

“We knew that was coming, but he did a nice job keeping them in the game. He probably finally ran out of gas a little bit.”

“He did a super job,” James said. “He had been struggling earlier in the year. He had lost his changeup, but he told me, ‘Coach I’ve got it back.’

“He wanted to start. An Arkansas kid throwing against the No. 1 team in the country, what better outing could you have asked for? Other than getting a win. But he put us in a position to win.

“When he left the game it was 4-1. To do that against the No. 1 team, that’s a memory he’s going to always have for the rest of his life.”

Arkansas junior right-hander Caleb Bolden (2-0) started and went five innings. He allowed 7 hits and 1 walk, but held the Golden Lions to 1 run and had 9 strikeouts.

Bolden and relievers Zack Morris, Gabe Starks and Heston Tole combined for 18 strikeouts to tie the school record. Tole struck out the side in the ninth inning.

“Caleb got us off to a good start,” Van Horn said. “He threw a lot of strikeouts. He had a pretty good slider going tonight. He was spotting his fastball. He kept the ball down.”

“I was just trying to go to right field,” Franklin said. “That’s what I had been practicing before the game and that was my approach. So when I finally got that pitch, just took a good swing and was able to hit it out of the park.”

James said the UAPB pitchers couldn’t match the velocity Arkansas’ hitters see on a regular basis in the SEC.

“Their guys are used to seeing 95, 96 [mph], and we were 82, 84,” James said. “But the thing that I was most impressed with about Franklin were the adjustments he made at the plate from pitch one.