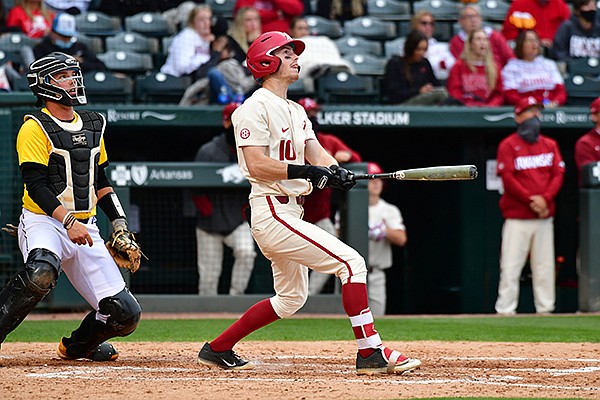 Arkansas' Matt Goodheart hits a home run during a game against Arkansas-Pine Bluff on Wednesday, April 14, 2021, in Fayetteville.

The No. 1 Razorbacks (28-5) finished one home run shy of tying the single-game school record of nine that was set during the 2010 NCAA regional against Grambling State. Arkansas brought its season home run total to 63, which is nine more than any other team in college baseball.

Matt Goodheart, Brady Slavens, Cullen Smith and Charlie Welch all hit two home runs for the Razorbacks. Slavens tied Christian Franklin for the team lead in the third inning by hitting his ninth home run of the season.

Goodheart led off the first inning with a mammoth home run that appeared to clear the Hunt Baseball Development Center in right field. The ball measured a 110 mph exit velocity off Goodheart’s bat.

After Franklin singled in the next at-bat, Slavens hit a two-run home run off the building to give the Razorbacks a 3-0 lead.

Arkansas scored six runs in the first inning and added two more runs in the second on solo homers from Smith and Welch.

The Razorbacks scored seven runs in the third inning when Slavens hit a three-run home run and Smith and Welch followed with a pair of two-run homers. Arkansas led 15-1 after three innings.

Arkansas capped its offensive outburst with an 11-run fifth inning that included a grand slam by Goodheart. Goodheart finished the game 4 for 4 with 2 walks and 5 RBI.

Slavens also drove in 5 runs during a 2 for 3 day at the plate. Welch had 4 RBI and Smith had 3 RBI.

Arkansas threw eight pitchers who combined to strike out 11 UAPB batters. The Golden Lions struck out 29 times in 16 innings during the series.

Kole Ramage (2-1) pitched two scoreless innings to earn the win for the Razorbacks. Elijah Trest gave up an unearned run in the third inning for the Golden Lions’ only score.

Trenton Ferguson (0-2) was the losing pitcher. The right hander faced five batters and did not record an out in his 19-pitch start.

The Golden Lions threw 9 pitchers who gave up 17 hits, walked 13 and hit 3 batters.

A few final notes from this one:

• The Razorbacks out-hit the Golden Lions 17-7. Arkansas also drew 13 walks and was hit by three pitches.

• Arkansas pitching combined for 11 strikeouts today. UAPB struck out 29 times in 16 innings during the series.

We'll have more on WholeHogSports.com soon.

Nate Wohlgemuth worked through a somewhat erratic top of the sixth inning, but kept UAPB off the board by working around two hits and a walk.

The Razorbacks had their second scoreless inning at the plate in the bottom of the sixth. Dylan Leach singled to lead off the inning and Wohlgemuth was hit by a pitch with two outs.

Charlie Welch struck out looking to end the inning.

There is a run rule in place after the top of the seventh inning.

Matt Goodheart's two-out grand slam off the video board was Arkansas' 11th run of the inning. Charlie Welch also had a bases-loaded walk and two runs scored on a two-out error.

Goodheart's homer was his second today and the team's eighth. That is one shy of the single-game record of nine.

The Razorbacks have scored four more in the fifth and the bases are loaded. UAPB is going to the bullpen for its seventh reliever of the game.

In this inning, Jacob Nesbit had a two-run single and scored on a throwing error, and Casey Opitz drew a bases-loaded walk with two outs.

Arkansas has 15 hits and has drawn 12 walks so far.

The Razorbacks stranded a runner in the fourth. Dylan Leach walked in four pitches to begin the inning, but Cayden Wallace and Cullen Smith flied out, and Casey Opitz grounded out to end the inning.

According to Phil Elson on the Razorback Sports Network, a run rule is in place for today's game. If Arkansas leads by 10 or more runs at the seventh inning stretch, the game will end.

Arkansas used a few pitchers in the fourth inning, so it appears Dave Van Horn is trying to get a lot of pitchers some short work. Caden Monke, Jaxon Wiggins and Ryan Costeiu all pitched in the inning.

UAPB put a couple of runners on base via an error and walk. The inning ended when Casey Opitz threw out Kacy Higgins trying to steal second base.

Arkansas pitching has struck out seven today and 25 for the series.

The Razorbacks stranded a couple of more in the third inning. That's five stranded for the game.

Arkansas has 12 hits through the first three innings, seven of which have been home runs.

Charlie Welch hit a two-run home run. That was his second homer of the day and the Razorbacks' seventh.

Arkansas has had eight consecutive hitters reach base with one out in the inning.

The Arkansas record for homers in a game is nine. That might get threatened today.

Karsten Vasquez singled and scored on a sacrifice fly in the third inning. Vasquez was one of three consecutive UAPB hitters to reach base to start the inning, but Decla Irvin was thrown out by center fielder Christian Franklin trying to go first to third after a leadoff walk.

Arkansas reliever Elijah Trest pitched in the third. He retired three in a row after allowing two singles and a walk.

Just like the first inning, UAPB recorded a pair of two-out hits against Kole Ramage. The inning ended when Casey Opitz threw out Justin Rieschick trying to steal second base.

Ramage has had to throw 44 pitches to get through the first couple of innings. He has four strikeouts.

The Razorbacks pushed home another run when Christian Franklin was hit by the first pitch thrown by Korey Wasson. Brady Slavens flied out to near the warning track in left-center field to end the inning, which stranded three runners.

Arkansas had three consecutive hits to lead off the inning, then put six on by way of walk or hit by pitch.

The Razorbacks put their first five batters on base in the inning, and UAPB pulled its starter, Trenton Ferguson, without recording an out.

Arkansas added runs when Cayden Wallace and Cullen Smith scored on two-out wild pitches. Wallace and Smith are among five players to walk in the inning.

UAPB is going back to the bullpen after intentionally walking Matt Goodheart, who led off the inning with a home run.

Matt Goodheart hit a home run over the new building in right field to lead off the bottom of the first, and Brady Slavens bounced a two-run home run off the new building a few pitches later. Christian Franklin singled in between them.

This feels like it could be a big day at the plate for the Razorbacks.

Kole Ramage worked around a pair of two-out singles by Humberto Maldonado and Nick Kreutzer, and struck out Timothy Martin to end the top of the first inning.

Ramage struck out two in the inning. Arkansas struck out UAPB 18 times last night, which tied the single-game program record.

The move has rained out and given way to a cool, sunny afternoon. The temperature will be in the low 60s for the start of today's game, and likely in the mid-to-upper 50s by the end.

Arkansas is using this series to get several looks at lightly used players, or players in new positions. Some of the notable changes today include Robert Moore and Jalen Battles sitting out; Matt Goodheart at first base; Brady Slavens in right field; Cullen Smith at second base; and Jacob Nesbit at shortstop.

Casey Opitz is also back in the lineup at catcher.

Kole Ramage will throw for the Razorbacks. He struggled at Ole Miss last weekend, but has pitched well in his last two midweek starts.

UAPB will throw right hander Trenton Ferguson, who will be on a pitch count of around 50.