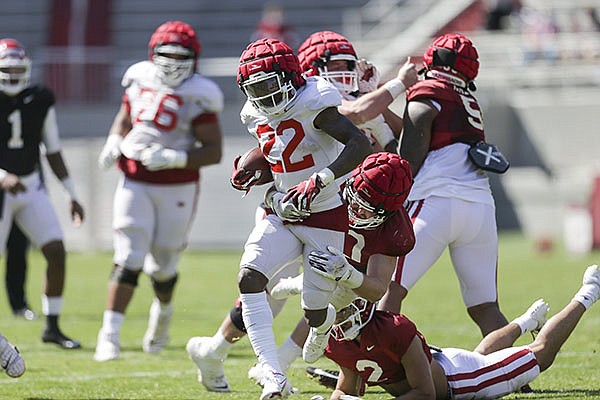 Arkansas running back Trelon Smith (22) carries the ball during a scrimmage Saturday, March 20, 2021, in Fayetteville.

FAYETTEVILLE — The University of Arkansas got by with something last season that flew mostly under the radar.

The Razorbacks received 216 combined carries from just two running backs — Trelon Smith and Rakeem Boyd — to account for 92.3% of all their tailback carries in 2020.

Before Boyd opted out with two games remaining, the percentage was much higher, as T.J. Hammonds took 14 carries for 101 yards in spot duty after starting the season as a slot receiver. Prior to that, redshirt freshman A’Montae Spivey had four carries for 11 yards earlier in the year.

Analysis Smith got a solid bit of work in the first spring scrimmage and less in the second. How much action he takes in Saturday’s Red-White game is in question. The coaching staff knows exactly what he and Hammonds can do. That means younger backs such as Oglesby, Hunt and Sanders and the walk-ons will likely get a decent shot to showcase what they’ve learned in the spring. Coach Sam Pittman said the run game has to be more physical in 2021, so that could mean big backs such as Sanders and Johnson will get some run, particularly if the Razorbacks are trying to close out leads late in games. Doling out game reps will be an interesting exercise for position coach Jimmy Smith this fall.

Arkansas is clearly laying the groundwork for diversifying its running back room in 2021, with Smith now clearly in the lead role, Hammonds back for a bonus senior season, and a variety of swift runners, big backs and combo backs also in the mix.

If all of them pick up the playbook and get suited for SEC speed, position coach Jimmy Smith will have all kind of options to choose from through the fall.

Dominique Johnson is back as a redshirt freshman and the biggest guy in the room at 6-1, 240 pounds. Josh Oglesby, who has sprinter’s speed as a trackster, has returned after suffering a foot injury in camp that knocked him out for all of last year.

Early enrollee freshman Raheim Sanders and Javion Hunt are getting valuable experience through spring ball, and the group will be joined by highly regarded AJ Green this summer.

There is little chance the Razorbacks — who have nine available running backs in spring drills with walk-ons Donte Buckner, Reid Turner and Preston Crawford added in — will run as low in numbers at the position as they did in 2020.

A key focus this spring has been improving physicality in the running game and pushing for production in short-yardage situations.

“We want to be a powerhouse football team,” Trelon Smith said earlier in the spring. “So coming into this season, we want to show everybody, hey, we can do that. I’ve talked to my O-line. They’ve talked to me, and that’s huge.”

“We’ve become a more physical offensive line,” Cunningham said. “I think we’ve definitely made major strides in that aspect of the game.

“Our backs, Trelon and all the other guys, they’re hard runners and they’re going to give you everything they’ve got every snap they play. I think that’s only going to help us. They’re tough runners. They run through contact. They’re good.”

Smith, for all intents and purposes, surpassed Boyd as the top tailback at an early stage in the season. Boyd continued to start when he returned from an ankle injury suffered in the first half of the Razorbacks’ 21-14 victory over Mississippi State in Week 2 that kept him out the next week.

Smith, who had turned heads during his sit-out season in 2019 after transferring from Arizona State, rushed for 81 yards and piled up 159 yards from scrimmage in a breakout performance in Week 3 at Auburn.

He’ll enter the 2021 season as the Hogs’ top tailback and one of the best backs in the country.

Smith appears to have one of the most upbeat attitudes on the team, and he’s emerged as a team leader for his junior year.

“It’s different, but I knew this time would come and I’m ready,” Smith said earlier this spring regarding his role as the veteran tailback. “The young bucks, they look up to me, so I’ve got to be the one to step in when they’re doing bad and lead them in the right direction.”

Smith’s 869 all-purpose yards ranked second on the team in 2020 behind receiver Treylon Burks (899). With a full 12-game schedule, Smith could be a solid candidate for a 1,000-yard rushing season if he gets the proper carries to support it.

Otherwise, the candidates are thick for supporting roles, including Hammonds, whose bursts on one long pass reception and one carry were instrumental in giving the Razorbacks a shot at defeating LSU late in the year when covid-19 testing and quarantining had decimated Arkansas’ numbers on the defensive front and also knocked Boyd out of the mix.

In Tuesday’s practice No. 13 of spring, the Razorbacks worked in shells and went back to primarily a three-down defensive front, as they used mostly in the first two-plus weeks of spring.

Tight end Hudson Henry left the practice field with what appeared to be an issue with his abdominal or rib area, while receiver Tyson Morris was not suited up with his left arm in a sling.

The Razorbacks have one more workout, likely in shells or helmets and shorts, on Thursday prior to the Red-White game on Saturday at 2 p.m. at Reynolds Razorback Stadium.