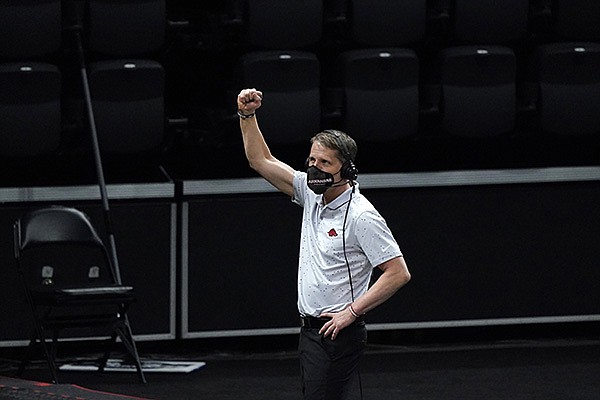 FAYETTEVILLE — Eric Musselman has reached an agreement to remain as the University of Arkansas basketball coach, a source with knowledge of the negotiations confirmed to the Arkansas Democrat-Gazette on Tuesday.

Details of the new contract are still being finalized, the source said, but an agreement is in place.

Musselman has agreed to a new deal for a combined $20 million over the next five years, according to another source with knowledge of the process. Musselman’s orginal five-year contract included an annual base salary of $2.5 million.

It’s not clear when an official announcement with the contract details will be made, but a tweet by Arkansas Athletic Director Hunter Yurachek late Monday night indicated Musselman will be staying at the UA after leading the Razorbacks to a 25-7 record and their first appearance in the NCAA Tournament Elite Eight since 1995.

Yurachek tweeted a photo of himself and his wife, Jennifer, along with Musselman and his wife, Danyelle, all raising glasses in a toast with the message, “Sleep well Arkansas! @RazorbackMBB is in good hands.”

Musselman had been mentioned as a candidate for several high-profile college jobs that came open after the season, most recently Arizona, which remains open after the school parted ways with Sean Miller.

This year marked the second of a five-year contract Musselman signed with Arkansas when he took the job.

By leading Arkansas as far as the Sweet 16 this season, a year automatically was added to Musselman’s contract with a raise of $250,000.

Yurachek told the Democrat-Gazette during Arkansas’ NCAA Tournament run that he was working on a new contract with Musselman’s agent Jordan Bazant and Musselman.

“Eric’s got all the leverage he needs with me because we finished second in the SEC and we’re in the Sweet 16,” Yurachek said before Arkansas defeated Oral Roberts 72-70 to reach the Elite Eight. “Eric doesn’t need the leverage of an opening at [another major program] to get the agreement that he needs here at the University of Arkansas. He’s got plenty of leverage by winning basketball games.”

North Carolina, Indiana, Texas, Oklahoma and Minnesota all have filled their openings with Musselman staying at Arkansas.

“I don’t think there’s been any hesitation at all from my end or from Hunter’s end,” Musselman said two weeks ago about working out a new contract at Arkansas. “I have two bosses — Hunter and Danyelle.

“I think both of my bosses feel strongly about the same things I do, which is we have something really cool going right now.”

“We finished the regular season, we were a top-10 team in the country,” Musselman said two weeks ago. “There’s a lot of really good momentum, so we want to just continue to build on what has been created thus far over the last 24 months.”

Arkansas assistant coach David Patrick interviewed for head coaching vacancies at San Jose State and Texas-El Paso, according to a source. Tim Miles was hired at San Jose State while the UTEP job was filled Tuesday by Joe Golding of Abilene Christian.

Earl Boykins, the Razorbacks’ director of student-athlete development, interviewed for the Eastern Michigan job that went to Stan Heath, a former Arkansas coach. Boykins, like Heath, is an Eastern Michigan graduate.

Michael Musselman, Eric’s son and the Razorbacks’ director of recruiting, has interviewed for a job with an NBA team.